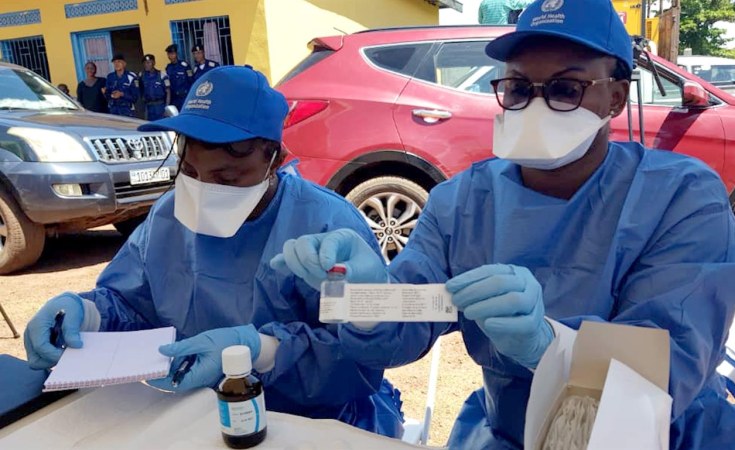 S.Oka/World Health Organisation
The Government of Democratic Republic of the Congo, with the support of WHO and partners, carried out a vaccination campaign in high-risk populations against Ebola virus disease in affected health zones.
UN News Service

Strengthening both security and the Ebola response effort is essential to contain the growing outbreak in the Democratic Republic of the Congo (DRC), UN health agency's officials said on Tuesday, following a visit to the epicentre of what is already the worst outbreak in the country's history.

Following their visit to Butembo, to express gratitude and show support to staff, in the wake of the recent attack at a treatment centre that killed Doctor Richard Mouzoko and left two others injured, World Health Organization (WHO) chief, Tedros Ghebreyesus and the agency's Regional Director for Africa, Dr. Matshidiso Moeti, reiterated their commitment to "defeat Ebola".

During the visit, Dr. Moeti and Mr. Tedros assessed the next steps needed to adjust the response, after meeting local political, business and religious leaders, calling on them to accelerate their efforts to help stabilize conditions on the ground.

"Most Ebola response activities, including community engagement, vaccination, and case investigation, have been re-launched following a slowdown in the wake of the attack, however a rise in reported cases in recent weeks is straining resources even further", WHO said in the statement.

"We will continue to adjust the response, as we have done for each context in each community," said Dr. Moeti, calling for action. "In the end, it is only through ownership by all the affected communities that the outbreak will end. Some would have Ebola drive us apart. We can only defeat it if we all work together", she added.

"We are entering a phase where we will need major shifts in the response", said Mr. Tedros, adding that the challenges can only be tackled if the international community steps in to "fill the sizeable funding gap", which is around 50 per cent underfunded.

Pride and respect for WHO staff

The head of WHO said also in the statement that Dr. Mouzoko's death had "moved him profoundly" and added that the much-respected epidemiologist deployed by the agency "was on his mind the whole time of the visit, as they met with other dedicated colleagues".

Dr. Moeti underlined that colleagues have been through something "unimaginable and yet they were willing to continue the vital work".

Reiterating the importance of having the security situation under control for both staff and local people, she said WHO would continue to work with various groups and embed their response at the community level.

More than 1,200 confirmed and probable cases of Ebola have been recorded since the outbreak began, with more than 760 deaths confirmed.

Ebola Survivors Can Develop Complications - Research
Tagged:
Copyright © 2019 UN News Service. All rights reserved. Distributed by AllAfrica Global Media (allAfrica.com). To contact the copyright holder directly for corrections — or for permission to republish or make other authorized use of this material, click here.