South Sudan: The 'Executioner' Who Would Kill Revitalised Peace Deal 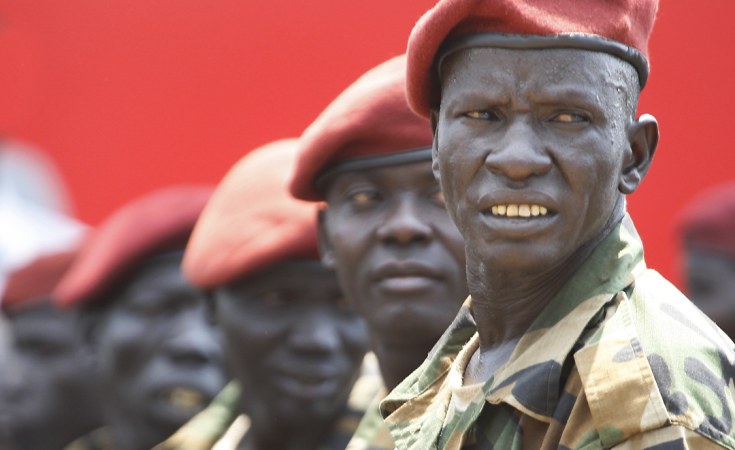 Reports of torture and killings by South Sudan's security forces could threaten a new peace agreement whose transitional government was to be formed on May 12 but has been delayed for six months.

The Sudan People's Liberation Movement-in Opposition (SPLM-IO) under Riek Machar says the International Criminal Court should prosecute torturers even though the country is not a member.

Last week, the UN Panel of Experts on South Sudan released its final report in which it said unchecked powers of the National Security Service means provisions of the Revitalised Agreement to Resolve the Conflict in South Sudan (RARCSS) could be flouted.

Aggrey Idri of SPLM-IO and Dong Samwel Luak, a rights lawyer fled to Nairobi in 2013 but vanished on January 23 and 24 2017, respectively. The UN report says they were executed three days after landing in Juba.

The two had been forcibly returned to Juba despite holding refugee status.

The High Court had barred their deportation and directed the State to produce them when their kin sued. Kenya denies knowledge of the incident.

Affidavits filed in court at the time named a South Sudanese intelligence officer called John Top Lam for demanding a $10,000 ransom in a call to Dong's brother. Lam was arrested but released on a Sh100,000 bond shortly after.

Machar on Friday said his party would continue to push for the court to be formed by judges from South Sudan and outside the country.

Last week, a leaked deal indicated President Salva Kiir was hiring a firm headed by former US ambassador to Kenya Michael Ranneberger to influence US views against the court. Kiir instead wants to form a transitional government and focus on reconciliation.

"If the regime fails to implement the security arrangements and forms the government, the revolutionary leadership of the people's war shall not be responsible for our people's reaction," Mabior Garang de Mabior, chairman of the SPLM-IO Committee for Information and Publicity, said.

"The People's Movement shall wage the struggle to dismantle the status quo; whether it is through negotiated settlement or armed struggle."

At the centre of the row is the increasing role of the Internal Security Bureau, deemed as Juba's most feared agency for torturing Kiir's opponents. The report says powers given to the bureau is indication of lack of political will to hold perpetrators to account.

"Their deaths offer a sobering reflection of the challenges posed to the implementation of the peace agreement by the violent legacy of South Sudan's conflicts, while highlighting the increasingly unchecked discretionary power of the NSS," the report says.

"The NSS...is emerging as one of the most major obstacles to the implementation of the agreement."

Some diplomatic sources in Nairobi say the bureau's powers rose around 2014, just as the war began and a feeling to protect Kiir's presidency became apparent. With loyalty to Kiir and not the government or law, the Akol Koor Kuc-led bureau was able to recruit militia, supply arms to them and disobey the 2015 peace deal.

Kuc is a lieutenant-general in the Sudan People's Liberation Army. His hands press buttons in places money flows. His compatriots say he was low-ranking soldier in 2008. Kiir promoted him in a series of elevations from colonel to Lt-General in 2011.

One cleric who served with him in the SPLN, but later fled the country, says he controls the most elite forces and influences militias that buttress security for Kiir.

He is essentially the man responsible for security arrangements in Juba, including those of senior government officials.

Kuc's powers were first felt in 2017 when then Chief of General Staff Paul Malong demanded that he be dismissed, blaming him for his arrest. Malong has since formed his rebel outfit; the South Sudan United Front which refused to sign the latest agreement.

"NilePet, is almost entirely unregulated and has fallen under the direct control of Kiir and his inner circle," the report said.

"This combination of capture and secrecy has allowed NSS to funnel millions in oil revenues to the brutal security services and militias with limited oversight and accountability."

On Friday, Kiir accused the rebels of plotting to withdraw from the deal and denied a role in any kidnappings. He said security has been adequate and that Machar's family ramains untouched in Juba.

"The so-called experts have rushed with conclusions without investigations being done," James Morgan, Kiir's envoy to AU, said.

The UN the Panel says the NSS has hired at least 3,000 personell in Tonj and Gogrial, the respective homes of Director-General of the Internal Security Bureau Akol Koor Kuc and Kiir, "with ethnic affiliation becoming an increasingly greater focus of the most senior government officials".

South Sudan Agrees to Delay Forming a Transitional Govt
Tagged:
Copyright © 2019 The Nation. All rights reserved. Distributed by AllAfrica Global Media (allAfrica.com). To contact the copyright holder directly for corrections — or for permission to republish or make other authorized use of this material, click here.