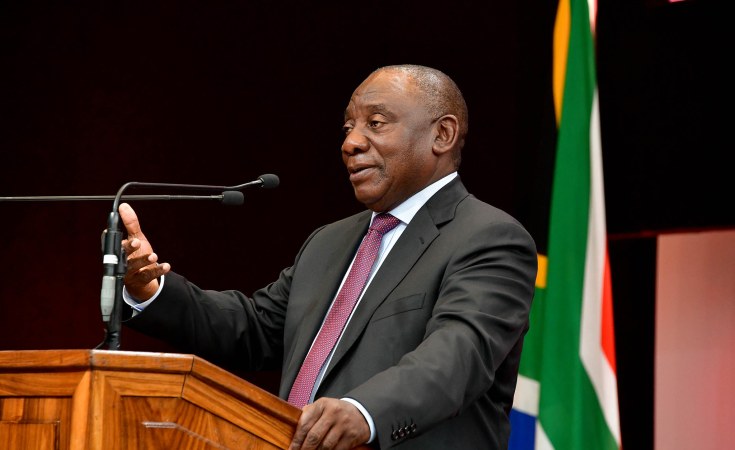 South Africa goes to the polls on May 8. The elections are gearing up to be a referendum on the ruling ANC party and whether it's done enough to rehabilitate its reputation for corruption and nepotism.

Twenty-five years after the end of apartheid, South Africa's political, social and economic situation is bleak.

"There have been a number of negative developments in the country, especially in regards to the economic situation," says Melanie Müller, a South Africa analyst at the Berlin-based German Institute for International and Security Affairs (SWP).

The economy is stagnating. The national debt is worrying. Unemployment is officially at 27 percent and more than one in two young people are without jobs - all this in Africa's most industrialized economy.

The African National Congress, which swept to power in South Africa's first post-apartheid elections in 1994, is seen as playing a decisive role in the county's misery.

A long list of ANC officials are accused of corruption and mismanagement that have added to the country's economic woes.

Former President Jacob Zuma, who was forced to step down in February 2018, has been dogged by corruption allegations. In particular, Zuma is being investigated for allowing the Indian-born Gupta family to plunder the South African state in what is known as the 'state capture inquiry.'

Zuma's successor Cyril Ramaphosa has promised a fresh start, presenting himself as a committed reformer, who will boost the economy and who is resolutely opposed to corruption.

"Ramaphosa has announced that he wants to fight corruption, he has also acted very quickly and replaced people in the government apparatus, who were accused of corruption," says Müller.

The question is whether that is enough to rebuild trust in the ANC.

"I have the impression that there are many in South Africa who would have preferred a stronger approach," says Müller.

Another of Ramaphosa's shortcomings is that he served as Deputy President during Zuma's last term from 2014 to 2018.

Anger at ongoing reports of corruption is denting faith in Ramaphosa and the ANC - something the opposition parties hope to cash in on.

"The South Africa I want to build will have no place for corruption and corrupt politicians," said Mmusi Maimane, the leader of the opposition Democratic Alliance (DA) at the launch of the party manifesto.

For a long time, the DA was seen as a party of the wealthy white minority. That has changed. In recent years, the DA has rejuvenated its leadership, with Maimane the party's first black chairman.

In the 2014 elections, the Democratic Alliance won a respectable 89 seats, making it the second largest faction in parliament behind the ANC, which holds 249 seats.

The other main opposition force is the Economic Freedom Fighters (EFF) - a far-left political party formed by the former ANC politician Julius Malema.

EFF's party's manifesto advocates for the nationalization of mining companies and the redistribution of land.

EFF politicians regularly attack the ruling ANC. "They say: 'You from the ANC have brought us political and democratic freedoms but haven't guaranteed economic liberties for for most black South Africans,' says SWP expert Mueller.

President Cyril Ramaphosa has already announced a constitutional amendment that would allow for the expropriation of land without compensation, if necessary, to distribute land more equitably.

Even decades after the end of apartheid, the majority of agricultural land is still largely in the hands of whites (even though exact calculations are hard to come by).

With the proposed constitutional amendment, the ANC is picking up a core EFF promise, even if President Ramaphosa promises cautious action.

Xenophobia on the rise

The issue of xenophobia is playing a major role in the current election campaign - in recent months, there have been flares of violence against migrant workers from other African countries such as Mozambique, Zimbabwe and Zambia.

"Here in South Africa, foreigners are often seen as scapegoats," says Angolan journalist António Capalandanda, who came to South Africa 10 years ago as a refugee. He says migrants in South Africa are scared and the fear has grown during the election campaign.

According to South Africa expert Müller: "The ANC government has criticized these attacks relatively clearly, but there are always actors who also ride a bit on this xenophobic wave is that is a similar populist campaign issue as unfortunately in Europe."

But Capalandanda believes the ANC was clearly responsible for the anti-migrant sentiment because the party hasn't been sufficiently opposed to xenophobia.

"President Ramaphosa's main concern is to distract from his own failures. He has spoken out against xenophobia much too late and far too little in this election campaign," says Capalandanda.

Despite the high unemployment, economic problems and corruption, the ANC is still expected to win Wednesday's election.

Politics of Nonchalance in the Mpumalanga Backyard of David Mabuza

South Africa Votes - 'We Should be Grateful for Boring Elections'
Tagged:
Copyright © 2019 Deutsche Welle. All rights reserved. Distributed by AllAfrica Global Media (allAfrica.com). To contact the copyright holder directly for corrections — or for permission to republish or make other authorized use of this material, click here.