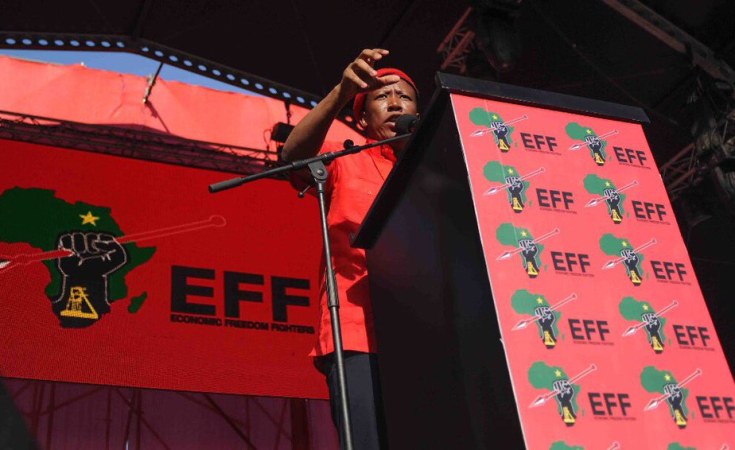 Many young South Africans won't bother casting a ballot in the May 8 general elections. This could limit the gains of the far-left party EFF, who is courting the youth vote.

The asphalt road leading to the township of Boipatong in Gauteng province is cratered with potholes, its edges fray into the sandy shoulder.

Rubbish has accumulated in dried-up puddles and sandy dells along the side of the tarmac, and goats graze among the mounds of plastic bottles, fast food containers and strips of paper fluttering in the wind.

The air is thick with yellow dust.

For Mpho Totsetsi, this is a healthy state of affairs.

The 25-year old student doesn't believe Wednesday's elections will result in a better road or improve the bleak situation in the township where she lives.

That's why she plans on simply ignoring Wednesday's general elections.

"I'm not voting. I didn't even register to vote. I feel like it wouldn't make a difference whether I vote or not," she told DW.

The young student sees elections as "events that pass" while her life in Boipatong remains the same.

"We still live as we did years ago. We often lack electricity and water, and the shacks made of corrugated iron are still here, and the potholes in our streets are still here, too," she says.

A friend of hers, Lucky Mofokeng, nods in agreement.

"In my life, I've only voted once, and I felt proud about it because I thought I was doing something for the country," he said.

"But yet again, the outcomes, they are still the same. Nothing changes," he says, which is why he won't bother turning up to the ballot box this year.

Unemployment in South Africa hovers at around 27 percent, according to official statistics, while more than half of the population lives below the poverty line.

The flagging economy and the ongoing inequality, coupled with political disillusionment, mean that many young people are turning their back on 2019 elections.

The number of South Africans under 20 who have registered for the May 8 vote has dropped to the lowest level since at least 1999, according to data from South Africa's electoral commission.

Youth disillusionment is a huge challenge in this election, says Verne Harris from the Nelson Mandela Foundation.

"Youth are alienated from the political process, they don't see voting offering them a way of changing things," Harris told DW.

They can see the extent to which politics and institutions have been corrupted. So it's no wonder that so many young people "have given up" on South Africa, he says.

Lucky Mofokeng says he won't even turn out to vote for the Economic Freedom Fighters (EFF), a far left-wing party that has focused its election campaign on courting the poor and the young.

The EFF is promising to provide housing and jobs, radical economic reforms such as mine nationalization, the expropriation of land from whites without compensation, better education, more efficient police - and greater dignity for black South Africans.

He was cheered by a sea of supporters wearing the party's red campaign color and red berets - the hallmark of the freedom fighters.

Malema also appealed to the youth to stay in school. "Your matric result is better than money - let it secure you a seat university. We want an educated nation," he said, rather than a nation with "millions on social grants."

Malema's message that is being received well by the jobless - 59 percent of all EFF voters are unemployed, studies say. But it's not necessarily convincing young people to turn out on Wednesday.

Back in Boipatong, Lucky Mofokeng shrugs off Malema's promises.

"They want to convince young people like us but take everything force," he says, referring to EFF's calls for land expropriation without compensation for white farmers. (Recently, though, the ANC also adopted the cause to score points with voters disappointed with the flagging economy and continuing inequality.)

Mpho Totsetsi sees the EFF as spending too much time criticizing the ANC rather than making its own policies.

"They are telling us the ANC can not give us jobs ... but they are not telling us what they can do for us. I don't know what the EFF stands for," Totsetsi says.

Pre-election polling indicates that the EFF will make significant gains on the 2014 elections, potentially reaching 14 percent of the vote.

"I think that the policies that the EFF are promising are very powerful. They speak to the needs of people," says Verne from the Nelson Mandela Foundation.

However, he points, the Democratic Alliance, the second largest opposition party, is also targeting these same voters.

And courting the youth vote is potentially a dicey policy.

"The youth does not really adhere to any party, they are interested in politics at the university and many choose only when they pay taxes," says Gareth van Onselen, the head of Politics and Governance at South Africa Institute for Race Relations.

Previous Story
Which Party Will Woo the 2.2 Million Undecided Voters? Here's What the Data Says
Next Story
'My Son Is in University Because of the ANC' - Supporters Back 'New Dawn' Ahead of May 8 Test

Which Party Will Woo the 2.2 Million Undecided Voters? Here's What the Data Says

South Africa Votes - 'We Should be Grateful for Boring Elections'
Tagged:
Copyright © 2019 Deutsche Welle. All rights reserved. Distributed by AllAfrica Global Media (allAfrica.com). To contact the copyright holder directly for corrections — or for permission to republish or make other authorized use of this material, click here.