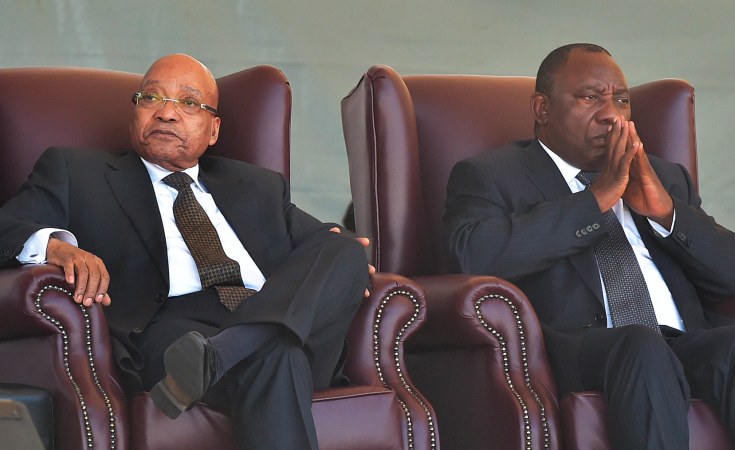 GCIS/Flickr
Then President Jacob Zuma, left, with then Deputy President Cyril Ramaphosa during a 2015 Women's Day celebration in Sasolburg in the Free State.
News24Wire (Cape Town)
By Kamva Somdyala

The National Education, Health and Allied Workers' Union (Nehawu) and the Electoral Commission of South Africa (IEC) have resolved their impasse, averting a potential strike by the commission's officials on election day, the union announced on Monday.

On Friday, the union issued a warning to the IEC saying members would down tools on May 8 if their demands, which included that salary bands and structure be changed for officials, were not met.

"Members are also expressing their discontent about the employer's refusal to assist with tools of trade such as transportation to move from one station to the other for purposes of delivering and fetching ballot boxes," the union said in a statement on Friday.

Now, the union says the dispute has been resolved.

"The national union has managed to push the employer to commit to the agreement that was reached at the Electoral Commission National Bargaining Forum (ECNBF)".

Nehawu also raised the issue of victimisation of workers at the IEC.

"The parties have agreed on a process to address cases of members who have been victimised by management," Nehawu's statement read.

The union further said: "In implementing the resolutions reached by parties a committee of three a side has been established to ensure that implementation takes place".

Over 22 000 voting stations will be operational on Wednesday when South Africans head to the polls for the sixth democratic elections. Special voting took place on Monday and is set to continue on Tuesday.

"The IEC plays a major role in upholding our democracy and in ensuring that they play that role with aplomb they must have a workforce that is motivated to go beyond the call of duty. Therefore, it is imperative that workers receive better salaries and they have all the tools of trade they need to perform their duties," the union said.

"Nehawu will closely monitor the implementation of the agreement and ensure that member's issues are addressed adequately and speedily."

Electoral Commission Satisfied With Day One of Special Voting