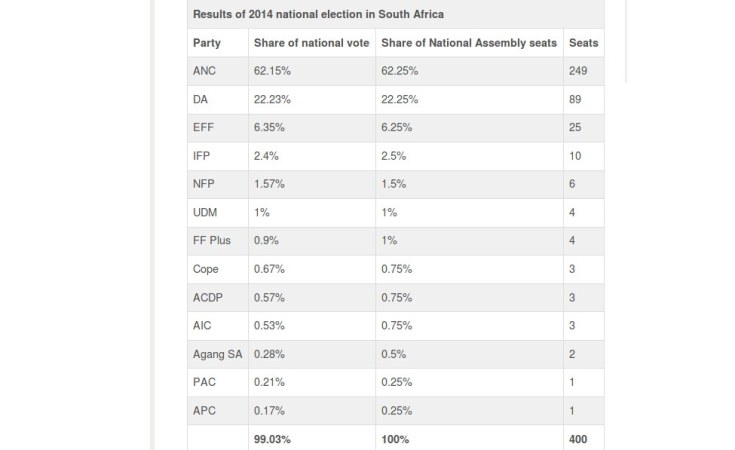 What is proportional representation? What are its weaknesses? And what other kinds of representation are there? We answer three frequently asked questions about South Africa's election system.

1. What is proportional representation?

When South Africans go to the polls on 8 May 2019, they will vote for political parties - not individuals.

"The political party gets a share of seats in parliament in direct proportion to the number of votes it got in the election," the Electoral Commission of South Africa (IEC) explains.

Parties fill these seats according to ranked candidate lists submitted to the IEC.

After the 2014 national election, 13 parties shared 400 seats in the National Assembly.

A formula is used to allocate votes that don't make up an entire seat. In this way, a party that doesn't get the minimum number of votes could still take a seat in parliament.

2. What are the strengths and weaknesses of the system?

An advantage of proportional representation is that "it makes sure that smaller political parties are included and represented. This means that the legislatures are made up of people with different interests," says the IEC.

But it doesn't make sure individual politicians are accountable to the electorate.

"Members of parliament [MPs] are appointed not directly by voters, but rather by their party," says a 2017 report by parliament's high-level panel on the assessment of key legislation and the acceleration of fundamental change.

"This makes them beholden to the party and its leadership rather than voters, and places party politics and loyalties ahead of effectiveness and delivery."

The panel, headed by former president Kgalema Motlanthe, examined how well the laws of post-1994 democratic governments have worked.

3. What are the alternatives to proportional representation?

In 2002, Cabinet appointed a team to investigate what would be the best election system for South Africa. It was headed by former opposition leader Frederik van Zyl Slabbert.

The team couldn't agree on a single system, so it recommended two options.

The recommendation made by the fewest members was that the existing system remain unchanged.

Most members recommended a mix of proportional representation and a constituency-based system.

This would involve dividing the country into 69 districts (or "multi-member constituencies"), each represented by three to seven MPs.

These constituencies would together elect 300 of the 400 members of the National Assembly. The remaining 100 seats would be filled according to proportional representation.

An independent panel appointed in 2006 to assess parliament, chaired by former MP Pregs Govender, found that the election system needed "urgent reform". It also recommended a mixed system, "which attempts to capture the benefits of both the constituency-based and proportional representation electoral systems".

In its 2017 report, the high-level panel recommended that the Electoral Act be amended "to provide for an electoral system that makes members of parliament accountable to defined constituencies on a proportional representation and constituency system for national elections".

This package is part of a journalism partnership with South African newspaper City Press. The project aims to ensure that claims made by those in charge of state resources and delivering essential services are factually correct. In the run-up to this year's national and provincial elections, it will be increasingly important for voters to be able to make informed decisions. This series aims to provide voters with the tools to do that.