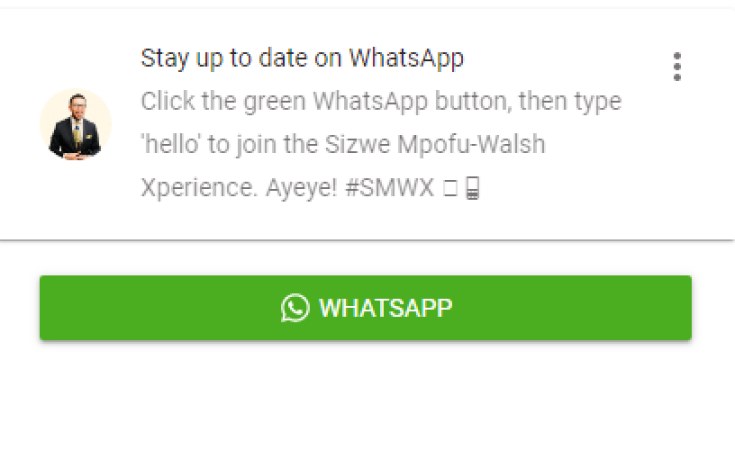 Rapper and scholar Sizwe Mpofu-Walsh is offering a journey into the 'heart of the 2019 South African election' on his innovative WhatsApp channel #SMWX.

Sizwe Mpofu-Walsh is a social commentator, a rapper, a political analyst, an Oxford University Ph.D scholar and a new media innovator.

He's also the founder of #SMWX - named after himself: Sizwe Mpofu-Walsh Xperience.

"And no, it's not another WhatsApp group," Sizwe says.

"We don't add everyone in a conversation at once because if anyone has ever been in a WhatsApp group chat they know how irritating that can become."

Sizwe seizes the opportunity in his intro video to play on the phrase: #OutWithTheOld and #InWithTheNew. The clever catch phrase doesn't only apply to the changes youth want to see in the government which is being elected on May 8.

It also refers to how leaders could choose to engage with the youth, using new media to address a young audience.

The youth vote, Sizwe believes, is the vote of power - although many politicians have overlooked this market, disregarding millennials as apathetic.

The response to his platform, he says, "has been overwhelming, proving that the millennials are anything but apathetic."

Reaching over 5,000 subscribers within the first two days of its launch on March 10, 2019, #SMWX now has over 11,000 followers. That's a third of what prime time paid TV viewership attracts in South Africa.

As well as news updates and behind the scene footage of political events, subscribers can give feedback and also request Sizwe's latest music video.

The rapper and scholar's ambitious pursuits to combine his love for hip hop music and the fruits of his academic scholarship add a special edge and grit to his WhatsApp channel. In addition, his content promises to deliver all the comedy, tragedy, intrigue and drama of South Africa's 2019 general elections.

On one episode of #SMWX, for example, Sizwe sits down with young political activist Naledi Chirwa in a colorful urban setting. She is a bold 25-year-old who speaks out against gender violence and how male dominance is causing black women to suffer unjustly. Her aim is to liberate the black woman from patriarchy.

In another, he talks to a local white actress who became controversial for attending an ANC rally and was afterwards called "the white cover girl for the ANC."

Sizwe also puts together news broadcasts - such as a recent one focusing on shabby infrastructure brought to light when recent flooding further damaged roads and shacks in KwaZulu-Natal province. This has led to ongoing protests, with poor communities taking to the streets in their more affluent surroundings to highlight the inequalities in South African society.

How does a 30-year-old graduate fund such a big project?

Just how the #SMWX concept is pulled together is a question that seems to intrigue many of Sizwe's Twitter followers - they bombard his feed with endless comments and questions like: 'Who's filming?' 'Is it just him?' 'But who's doing the digital strategy? 'This is exciting!'

Sizwe reveals that he does the channel in collaboration with a tech company called Thanga.

He was at school with Thanga's CEO Roy Barole and the two friends have been chatting for years about doing something groundbreaking.

The May 8 elections provided the perfect opportunity to do just that.

In addition, the two have sought grant funding from the South Africa Media Innovation Program (SAMIP) which accelerates digital media initiatives in SA, especially those run by independent broadcasters such as #SMWX.

How exactly does #SMWX work?

Thanga uses artificial intelligence, instant messaging and chatbots to run the channel - while still maintaining human interaction with subscribers. This kind of technology is, as one Twitter follower comments, "the next level," especially for a developing nation like South Africa.

With Thanga covering the technical aspects, Sizwe handles the editorial side of things, which gives him the freedom to focus on topics that affect and interest young people - topics such as racism, unemployment, land reform and access to education.

He's helped by a team of six creatives to do this.

What will happen to #SMWX after the election?

Sizwe says there are plans to continue after the election, to expand the channel "to different places on the continent and in different languages in South Africa."

One issue is how to make money from the platform and keep it going in the future without diluting the integrity and values of his brand, Sizwe says.

Do we smell a conflict of interest?

After the many years of ANC corruption and nepotism, South Africans are sensitive to any hint of favoritism or conflict of interest. And Sizwe's dad is Dali Mpofu, a lawyer who happens to be the chairman of the Economic Freedom Fighters - currently the third biggest party in South Africa.

Sizwe is keen to stress that he shares no political affiliation with his dad's party or any other party for that matter. He says his channel is neutral and he assures followers that he doesn't have any political agenda other than to be a voice to a younger generation.

But, he admits, his dad - and his mother for that matter - influenced him in that they made it clear politics was important.

"My parents were always political and I grew up in a political household and so politics has always been a part of my life," explained Siswe, who back in 2014 shot to fame as a rapper when he penned a political song addressed to then South African president, Jacob Zuma.

Growing up in a different generation, he says the situation is different now to when his dad entered politics during apartheid. The youth of today just want to see the government deliver on its promises.

"My hope is that this platform will act as a catalyst for other young people to build a network or discussion and debate using new technology to contest the mainstream media landscape in South Africa," he said.

You can take a look at the #SMWX WhatsApp channel by following the link on Siswe's Twitter account.

ANC Says No to South African Media Tycoon's U.S.$70,000 Donation
Tagged:
Copyright © 2019 Deutsche Welle. All rights reserved. Distributed by AllAfrica Global Media (allAfrica.com). To contact the copyright holder directly for corrections — or for permission to republish or make other authorized use of this material, click here.