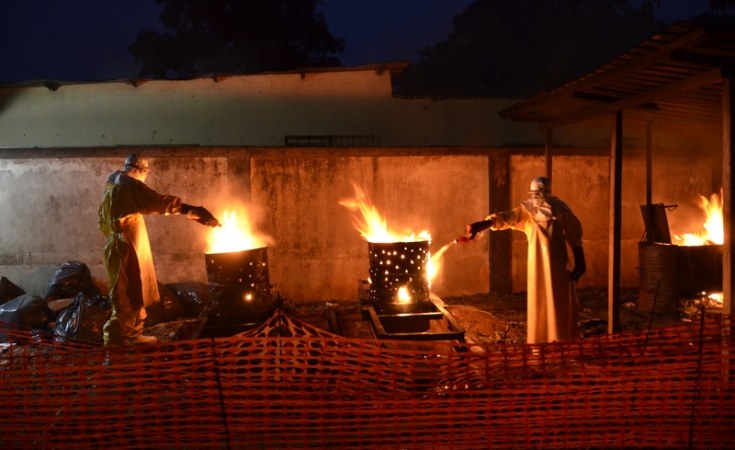 MSF
No object that can not be chlorinated can exit the high risk zone. Dona Ebola treatment center in Conakry.
CAJ News Agency (Johannesburg)
By Jean Kassongo

Kinshasa — THE United Nations (UN) has expressed concern at the death of more than 1 000 people from the the Ebola epidemic in the Democratic Republic of the Congo (DRC).

Secretary-General, António Guterres, sent his condolences to the victims' families and reiterated UN's commitment to end the outbreak.

He also urged all Congolese leaders to work together across parties and across communities to tackle the outbreak that is in its tenth month.

Guterres underscored the need for additional resources and called on UN member states and partner organizations to ensure the responding agencies have the resources needed to succeed in eradicating the outbreak.

The UN chief commended the government, institutions and Congolese people on the overall response so far, which has contained the outbreak to within parts of two provinces.

These are the eastern Ituri and North Kivu, which are home to multiple armed groups, which have been battling each other and government forces for years.

Armed groups are blamed for attacks on Ebola treatment centres and healthcare facilities.

The World Health Organisation (WHO) blamed such attacks and for the rise in Ebola cases.

Violence has prevented response teams from immediately identifying and creating vaccination rings around all people at risk of contracting the virus.

"We still face challenges in making sure the contacts of every case receive the vaccine as soon as possible, said WHO Director-General, Tedros Adhanom Ghebreyesus.

The outbreak is the second worst in history following the one that claimed 11 000 lives in West Africa between 2013 and 2016.

The U.S. Ambassador to Juba and Minister of Health Visit Ebola Vaccination Site

Aid Community Raises Highest Alert On DR Congo Ebola
Tagged:
Copyright © 2019 CAJ News Agency. All rights reserved. Distributed by AllAfrica Global Media (allAfrica.com). To contact the copyright holder directly for corrections — or for permission to republish or make other authorized use of this material, click here.