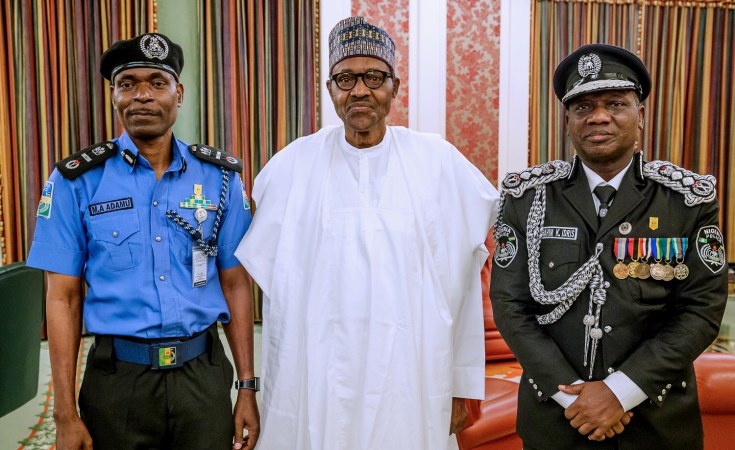 Abuja — President Muhammadu Buhari Thursday in Abuja instructed the security chiefs to be alive to their responsibilities and allow Nigerians sleep with their two eyes closed.

Buhari gave the directive during a meeting with service chiefs, including the Inspector-General of Police, Mohammed Adamu, the Minister of Defence, Mansur Dan-Ali and the National Security Adviser, Major-Gen. Babagana Monguno, in the State House.

The president's meeting with the service chiefs Thursday was the second in the last 48 hours.

Answering questions from State House correspondents at the end of the meeting, Chief of Naval Staff, Rear Admiral Ibok-Ete Ekwe Ibas, said Buhari directed them to ensure that Nigerians go to bed without any fear and wake up being confident that their security is guaranteed.

According to him, they met with the president to brief him on security situation at home while he was away on private vacation in London particularly on issues bordering on proliferation of arms.

He said: "It was just basically to apprise Mr. President of the security situation generally after his short vacation abroad.

"The security agencies briefed him on what has been happening with particular emphasis on the proliferation of small arms and what the various agencies are doing to curtail the consequences of this proliferation.

"He has also given directives that the agencies should do much more to ensure that Nigerians go to bed and wake up feeling healthy and confident that their security is guaranteed."

Ibas claimed that security situation in the country had improved especially on issues of kidnapping.

The naval boss also claimed that the reduction in the rate of kidnapping was the fallout of the directive earlier given by the president to the IGP, and the consequent launch of Operation Puff Adder.

"You will recall during the last meeting, the IG was directed to ensure action and consequently various operations were set up.

"Puff Adder was one of the strategies. With the set up of that operations, there have been a remarkable drop in the number of kidnappings.

"What normally would attract attention is when a key person in government perhaps is kidnapped. "On the whole, the number of kidnappings has dropped and generally, I think the security situation is improving," he stated.

On the kidnap of the District Head of Daura, Alhaji Musa Umar, the naval chief disclosed that key suspects in the kidnap had been arrested and would be charged to court soon.

"Serious efforts are being made, key suspects have been arrested and it is hoped that in a short while, those behind the heinous crime will be brought to book," he added.

The victim who was kidnapped in front of his house on May 1, is however yet to be freed.

Insecurity Across Nigeria - What We Told Buhari - Naval Chief

Let's Be Friends - Buhari Wants to Win Over the National Assembly
Tagged:
Copyright © 2019 This Day. All rights reserved. Distributed by AllAfrica Global Media (allAfrica.com). To contact the copyright holder directly for corrections — or for permission to republish or make other authorized use of this material, click here.