Nigeria: What Does Magu Want From Saraki? 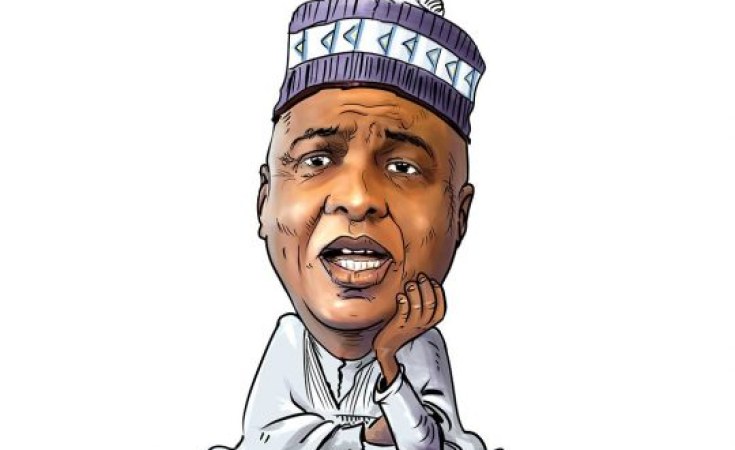 Judging from its latest investigation on the Senate President, Dr. Bukola Saraki, the Economic and Financial Crimes Commission (EFCC) is easily convincing more Nigerians that it is acting on the instruction of some persons in the corridor of power, not to bring down Saraki, but destroy himself and the EFCC and by implication, rubbish the anti-graft effort of President Muhammadu Buhari.

It is high time Nigerians began to differentiate between real security issues and politically motivated intimidation by security agencies either working on instructions or simply acting to please their employers.

While in the real sense of it, security agencies should work independently and apolitically, observers need no further clarifications to conclude that some agencies are openly selective in their dispensation of justice.

The EFCC must particularly save the country from the embarrassments arising from its seemingly calculated attacks on perceived political opponents of the incumbent administration.

The curious fixation on Saraki by some security outfits in Nigeria calls for caution in that if not addressed, these security agents only act more as attack dogs of the executive, particularly the presidency instead of operating professionally in the interest of Nigeria and Nigerians amid the burgeoning national security challenges.

Watchers of the Nigerian political landscape are not oblivious of the fact that Saraki has been through many orchestrated travails, which discerning minds are aware were targeted at silencing him as he was considered anti-Buhari's All Progressives Congress (APC) national leadership after he emerged Senate President without the ruling party's approval.

But it is worthy of note to recall that after the torturous 1018 days from September 22, 2015, when he started facing the media-trial at the Code of Conduct Tribunal (CCT) over trumped up charges of false assets' declaration, the Supreme Court, in a judgment on July 6, affirmed the June 2017 decision of the CCT, which ruled that the prosecution failed to prove the case against Saraki.

The Justice Tinuade Akomolafe-Wilson-led Court of Appeal sitting in Abuja had struck out 15 out of the 18-counts amended charges of false assets' declaration brought against Saraki by the federal government and ordered the CCB to conduct a fresh trial on three of the charges.

The three remaining charges were eventually struck out, exonerating and vindicating the former Kwara State governor, who sustained his argument that his trial was politically motivated. Indeed, it was.

Elated that the court observed too that certain agents took over the responsibility of the CCB in his trial, and that it could be inferred that the case was done towards a pre-determined end, Saraki said back then at the end of the trial that "God has vindicated me today before the judgment of man, and I am most thankful and humbled at His grace and infinite mercies."

Though Saraki escaped the snare of his enemies by stroke of luck and a virile court, the forces regrouped and came up with yet another strategy, which was to implicate Saraki as involved in the Offa bank robbery of April 5, 2018 during which no fewer than 32 persons were killed, including a pregnant woman and nine police officers.

Though still an ongoing investigation, Saraki has maintained innocence. Just as in the earlier case, he said the investigation was politically-motivated to implicate him.

Thus, when the news broke that the principal suspect in the armed robbery attack, Michael Adikwu, had died in custody under questionable circumstances, Saraki in a statement by his Media Adviser, Yusuph Olaniyonu, reiterated that he has been vindicated, because he knew long ahead that the chap had been killed to conceal facts and muddle up the case.

And following his earlier claims that the suspect had been murdered in police custody to distort the story, he insisted on an inquiry into the death to unravel how the investigation into the robbery incident was conducted by the police and whether the investigation followed the normal process and comply with global best practices.

Saraki is asking the police to state why it took them so long to make the disclosure about the death of the principal suspect after they categorically denied it at the time he (Saraki) disclosed the information and it was reported in the media.

That event of August 7, 2018 was due to the fact that Saraki had summoned an emergency meeting to discuss issues which included the massive defections that affected the ruling APC, majorly the rumour of plans to impeach the Senate President and the pending 2019 elections supplementary budget, among others.

It was an incident that prompted then Acting President Yemi Osinbajo (SAN) to direct the sack of the Director General of DSS, Lawal Musa Daura with immediate effect.

Fearing that Saraki had a strong hold on the Senate and not ready to experience his return to the National Assembly in the 9th assembly, forces in the presidency deplored every arsenal at their disposal to dislodge him from the political control in his home state of Kwara but now that his influence would be a major factor in the emergence of the leadership of 9thassembly, the EFCC has gone to work against him.

The ruling APC, especially its National Chairman, Comrade Adams Oshiomhole has been working round the clock to impose a set of leadership on the two chambers of the National Assembly and this could not be achieved without a fight from the opposition Peoples Democratic Party (PDP) and as such, Saraki becomes a target.

Reliable sources close to Saraki have said that the politically savvy outgoing Senate President has something up his sleeves in the build-up to the election of his successor while on the other hand the APC at every level is itching to take absolute control of the next assembly. It is the more reason Saraki must be silenced and that is exactly what is playing out and the lawmakers are aware of it.

The EFCC, in a letter signed by its Zonal Head, Isyaku Sharu, noted that it has commenced fresh investigation to probe all salaries, allowances, estacodes, and payments Saraki received as governor from 2003 to 20011.

The curious probe is coming a few days after the International Human Rights Commission (IHRC) named Saraki as its 'Ambassador-at-Large', and eight years after he left office as governor of Kwara State.

The notification contained in a letter to the state government, through the Permanent Secretary, Government House, dated April 26, was titled, "Investigation Activities: Dr. Bukola Saraki."

Isyaku wrote in the letter that: "In view of the above, you are kindly requested to furnish us with the full details of all his entitlements to include but not limited to emoluments, allowances, estacodes, other fringe benefits and severance package while he held sway as the Executive Governor of Kwara State between 2003 and 2011.

"This request is made pursuant to Section 38 (1) & (2) of the Economic and Financial Crimes Commission (Establishment) Act, 2004 and Section 21 of the Money Laundering (Prohibition) Act."

While not a few people in the Saraki camp consider the latest move by the government as another smear campaign intended to rubbish the Senate President before the international community, some lawmakers in the National Assembly consider the development as part of plans to destabilise the leadership of the 8thassembly at the tail end of their tenure and render Saraki irrelevant in determining who succeeds him.

Some insightful observers are already wondering why Saraki was singled out for such a probe among those that held office as governor in that period. There were several governors, who served the same time Saraki did on both party platforms but in its fixation to deal with him, the EFCC has obviously forgotten that it has not had time for any other former governor in his category.

It becomes more interesting when what the EFCC wants to look at are his legitimate earnings like salaries. Apparently lacking any other meaningful reason to hound him, the EFCC wants to probe Saraki's esacodes and other emoluments as governor? This is sheer insanity from an obviously inept commission.

While adage, 'who pays the piper dictates the tune' suffices even in the aspect of security in our clime, the acting Chairman of EFCC, Mr. Ibrahim Magu must not throw caution to the wind. He must have it at the back of his mind that people in other parts of the world are watching the activities of his commission. This is more so when after all said and done, nothing concrete comes out of the investigation. Besides, he won't be EFCC chairman forever.

The commission has simply convinced Nigerians that members of the ruling party are insulated from its probe otherwise how else would Magu explain EFCC's decision to look away from viral video of the Kano State Governor, Abdullahi Umar Ganduje receiving dollar bribes at different times?

If Saraki had been caught under similar circumstance, would the presidency and EFCC have put forward same excuse of doctored video for him? The answer is no! He would have been forced to resign, docked and jailed. The feeling making the rounds presently is that the government has concluded plans to bring Saraki in after the last indefinite adjournment of the Senate.

The plan is to ensure that he is unable to influence the choice of leadership in the 9th assembly. But someone very close to the Senate President said: "Even if they do that, they won't have their way." If truth must be told, leave aside his calm mien, despite all the claims by Oshiomhole that his party has absolute control in the incoming National Assembly and therefore must control all levers of leadership therein; Saraki's influence cannot be waived aside. Whoever does that did so at his or her peril.

The advice to Magu and the EFCC is that the body must work to persuade the minds of many Nigerians, who consider the outfit as presidency's attack dog against its perceived political opponents. If a Nigerian must be investigated, such investigation should not be seen as an attempt to silence the opposition.

Previous Story
Next Story
Why EFCC Is Investigating Me - Saraki

Why EFCC Is Investigating Me - Saraki

Bukola Saraki's Two Lagos Properties Seized
Tagged:
Copyright © 2019 The Guardian. All rights reserved. Distributed by AllAfrica Global Media (allAfrica.com). To contact the copyright holder directly for corrections — or for permission to republish or make other authorized use of this material, click here.