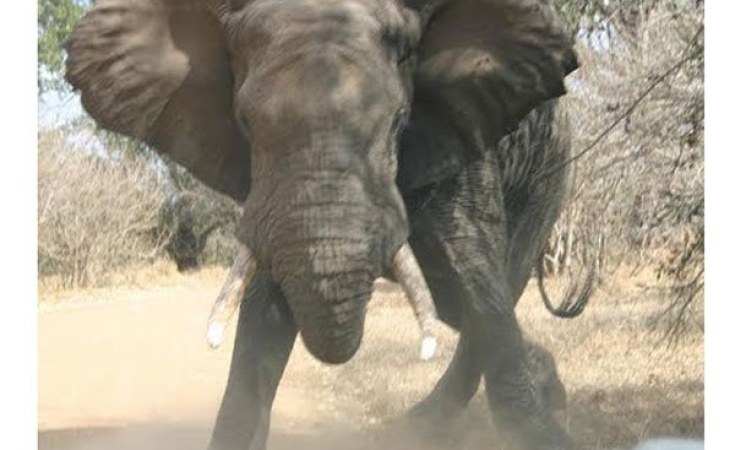 Kasane — Working early mornings and knocking off late in the evening is taken for granted by many people in Botswana. Not in the Chobe district.

Walking to and from work, even going to the shops and running other errands carries with it, risks that residents have to navigate on a daily basis.

Commuting by car is not a guaranteed safety option as motorists have to grapple with accidents involving members of the big five.

Although the country's constitution says that no one shall be deprived of his freedom of movement, including the right to move freely throughout the country, elephants in Chobe have from time to time denied residents such freedoms.

The uneasy co-existence of humans and wild animals in this tourism paradise from time immemorial, has now reached crisis proportions with elephant numbers spiraling out of control.

Attempts to promote and support co-existence for ecological, social and economic benefits have so far borne very little fruit, owing to the fact that the ecosystem's carrying capacity can no longer cope.

Fauna of various persuasions including, but not limited to lions, buffaloes and elephants rule the roost here.

While residents, who were born here, are now used to this state of affairs, no person should be made to believe that fatalities from elephants are normal.

People at the lower end of the economic and social spectrum are at an even more vulnerable position to elephant attacks, especially those who walk to work at dawn such as security guards and employees in the hospitality industry.

Included in this group are farmers, who are forced to look after their domestic animals in the bush, where elephants roam in large numbers.

While in most parts of rural Botswana farmers have it easy, in the Chobe villages of Pandamatenga, Kasane, Mabele, Kavimba, Kachikau, Satau and Parakarungu, the majority of them have become the face of the human-wildlife conflict and form part of the fatal statistics.

Low paid workers are amongst those who start work earlier than most people and are the last to arrive home in the evening.

Their socio-economic conditions and the pittance that they normally earn ensures that they cannot afford public transport fares on a daily basis.

By resorting to walking and traversing the animal corridors, they directly put their lives on the line.

School children are also on the receiving end of the scourge caused by wild animals, especially elephants.

The Chobe area is not under any internecine warfare, neither is it under a constitutional state of emergency.

However, come night time, conditions under which residents live are not far removed from those of conflict riddled areas.

While it is common cause in rural areas that people move freely at night and in the early hours of the morning to run errands, in Chobe this is a luxury that few people can afford.

Those who defy this involuntary curfew do so at the risk of losing their lives, courtesy of wild animals such as elephants which take charge of their surroundings after sunset.

A mere walk around the villages at night can be fatal, in fact many a resident has been befallen by this tragic occurrence.

A tale is told of a woman who was on her normal exercise routine on the staircases in Plateau who was trampled by a buffalo, only to be saved by a ditch which she fell into.

Thinking that she is dead the buffalo took turns to graze and check on her as if to confirm if she had indeed died.

She was lucky to survive the ordeal.

The Jumbos have declared a state of emergency and failure to adhere to their jungle law has seen many people paying with their lives.

In Kasane, a prime tourism destination and the epicenter of luxurious hotels, lodges and camping sites, the situation is not different.

In the Chobe Enclave villages of Mabele, Kavimba, Kachikau, Satau and Parakarungu, where conservation agriculture is practiced along the Chobe River, every year elephants destroy farmers' produce, in the process impoverishing them and threatening their food security.

While farmers bear the brunt of an elephant population explosion, global conservation NGOs are furious at government's consultations on the lifting of the hunting ban.

While acknowledging that human-wildlife conflict is real in Botswana, they argue that trophy hunting and elephant culling do not deter poaching and would not address the human-elephant conflict.

Their argument is that trophy hunting is detrimental to wildlife conservation. While they vouch for a science based and sustainable elephant management plan, farmers continue to suffer as their agricultural production continues to be undermined year in year out.

After the cabinet sub-committee submitted its report on consultations with communities, they was a huge global outcry by conservation groups.

However, government led by President Dr Mokgweetsi Masisi and other Kavango-Zambezi Transfrontier Conservation Area(KAZA TFCA) heads of states are determined to find a lasting solution to the elephant problem.

Kgosi Morgan Makhanga of Kazungula has lived long enough and knows fully well the destruction brought by elephants in his village.

The pain, he noted, is still fresh in his mind because one of them was killed within the village while herding cattle.

The traditional leader has seen his people give up on farming, which they relied on for many generations.

"If you go to the Chobe River bank where we practiced Molapo farming you will realise that people have surrendered their farms to business owners. When they could not stomach the destruction of their crops by elephants they sold their farms to other people who have now built lodges along the river. We are poor and my people have to rely on the Ipelegeng programme for sustenance," he begrudgingly said.

Kgosi Makhanga argues that the elephant menace was not always like this before the hunting ban and advocates for the return of conservation hunting in Chobe to reduce the ballooning numbers.

"Government should bring back hunting because when that happens elephants move away from human settlements and the conflict is minimised. We cannot be expected to co-exist with animals that bring death and sorrow to our lives," he said.

The elephants, he also mentioned, destroy fruit trees in homesteads and noted that their homes have been transformed into agricultural museums with ploughs that serve no purpose.

While acknowledging that they are used to living with animals, Kgosi Makhanga believes that it was time elephants benefitted communities.

Another option, he highlighted, is for government to erect an electric fence around residential areas and leave animal corridors to prevent elephants from roaming the village on their way to the river to drink water. The hunting ban, he bemoaned, has destroyed livelihoods in that the Kazungula, Lesoma, Pandamatenga (KALEPA) Trust has all but collapsed. Kgosi Makhanga said when the trust was functional, it used to raise money for developments in the village. When the trust collapsed, he added, it had just entered into an agreement to purchase a campsite in Lesoma. Consequently, he explained that due to lack of revenue, they failed to conclude the payment.

"As a Motswana if you don't farm in rural areas you end up as a pauper. The eviction of farmers from their fields is difficult to bear as most of them still harbour ambitions to grow their own food," he asserted.

The KAZA TFCA region accounts for about 50 per cent of the African elephants with the SADC region hosting 293 000.

Government, especially, believes that conservation hunting can go a long way in reducing human-elephant conflict as was the case before the hunting ban was introduced in 2014.

It is within this spirit that President Dr Masisi invited other heads of states from the KAZA conservation area to discuss a common approach towards the management of elephants.

The objective was to formulate an elephant management strategy that the KAZA TFCA region will present at the CITES CoP 18 meeting in Sri Lanka.

Owing to the uproar from Western countries, the 2019 elephant summit has reaffirmed its commitment to engage the global community which forms the backbone of the local tourism industry, to understand the challenge of an exploding elephant population and its impact on local communities.

The heads of states also committed to ensuring that communities that are at the receiving end of the human-wildlife conflict benefit from sustainable natural resources management.