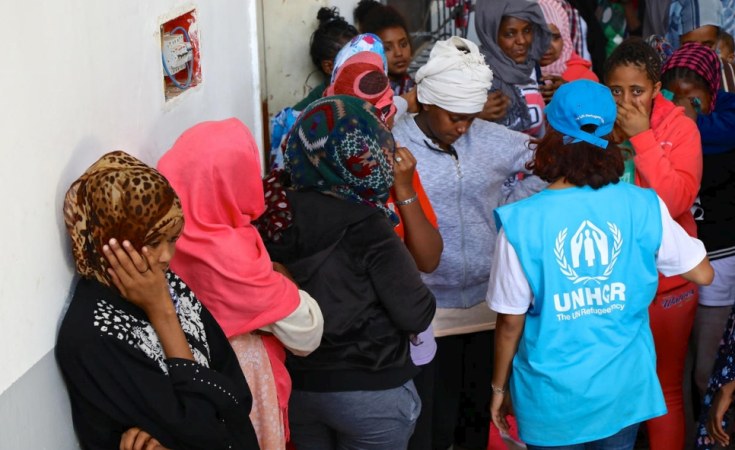 Dakar — Migrant women and children trapped in the battle for control of Libya's capital are being turned away from shelters, exposing them to airstrikes and sexual abuse, aid agencies said on Friday.

About 140,000 migrants and refugees were estimated to live in Tripoli before heavy fighting broke out last month between opposition troops and the United Nations-backed government's forces, said the International Rescue Committee (IRC).

There are not enough shelters for the thousands of people fleeing violence and migrants and refugees have been turned away from those that house Libyans, said the IRC.

Only one shelter in Tripoli is open to migrants and refugees specifically, and agencies have faced resistance to setting up more, said medical charity Medecins Sans Frontieres (MSF).

"Some of the Libyan population is able to rely on friends and shelters. We're very concerned about migrants and refugees because they don't have those kind of coping mechanisms," he told the Thomson Reuters Foundation.

The situation is worse for migrant women, who are doubly discriminated against by authorities, often lack the means to rent housing and face pervasive sexual abuse, said the IRC.

"These migrants were often already living in the shadows before the escalation," said Elinor Raikes, Europe and North Africa Director at IRC.

"Their vulnerabilities have been exacerbated."

More than 3,000 migrants and refugees are locked in detention centres inside Tripoli, where food and water supplies are dwindling and airstrikes are metres away, said MSF.

A piece of shrapnel blew a hole through one this week and nearly hit an infant, said MSF. The detainees are still inside.

The U.N. Refugee Agency in a statement this week urged countries to come forward with relocation offers so migrants and refugees can be evacuated to safety.

Libya hosts more than 700,000 people who have fled poverty or war, many from Syria and sub-Saharan Africa, as it is a main departure point for boats crossing the Mediterranean to Europe.

The internationally recognised Government of National Accord based in Tripoli is opposed by a rival administration in the east. Eastern commander Khalifa Haftar's Libyan National Army mounted an offensive on the city in early April.

Previous Story
Next Story
More Than Medicine: a Look At Mental Health Needs in Detention

More Than Medicine: a Look At Mental Health Needs in Detention