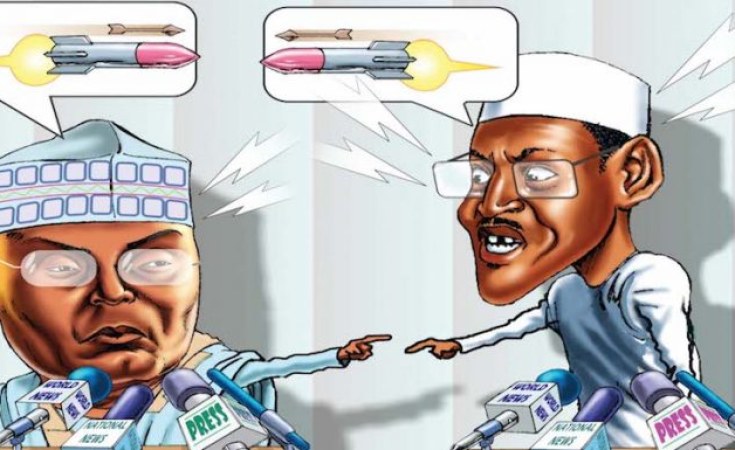 The Federal Government yesterday said the Peoples Democratic Party (PDP) and its presidential candidate Atiku Abubakar should stop beating the drums of war in the country.

"Never in the history of politics in Nigeria has an opposition party and its presidential candidate exhibited the kind of desperate tactics being deployed by the duo of the PDP and its flag-bearer, especially since President Muhammadu Buhari overwhelmingly defeated Atiku to win the 2019 presidential election," Mohammed said.

The minister alleged that either by themselves or via their proxies, the PDP and its presidential candidate are doing everything possible to sabotage the Buhari Administration, overheat the polity and "make Nigeria seemingly ungovernable, especially through their public utterances and their poorly-thought-out press releases before and after the 2019 general elections."

He said unless they quickly retrace their steps, they may, sooner than later, overreach themselves.

"For those who may be quick to accuse the government of crying wolf, the pre-election statement credited to the former Vice President, that unless Nigerians vote out the APC Administration, killings by herdsmen will continue and ultimately spark a series of ethno-religious crises that will be irreversible, is looking more like a Freudian slip than anything else.

"Also, in recent times, the PDP has taken its desperation to a new low by attacking the judiciary, an action many see as indicating a reversal of the party's hitherto self-assured stance that it has a solid case against the election of the President.

"And either by coincidence or orchestration, a faceless group emerges from nowhere calling for an overthrow of a democratically-elected government, a totally egregious act of treason.

"It beggars belief that a candidate who prides himself as a democrat can so allow desperation to becloud his sense of propriety to such an extent that he will be associating with anti-democratic forces or making inflammatory statements," he said.

Mohammed said for acclaimed democrats, there are acceptable channels of seeking redress after an election defeat. "Even President Buhari himself went to court three times to challenge election results.

"What is not acceptable is to either resort to self-help after an election defeat, or to embark on a journey of subterfuge and sabotage while also mounting a legal challenge or pretending to do so. Worst still, painting the judiciary bad for whatever reason is anti-democratic and unconscionable.

"We want to urge the main opposition party to stop beating the drums of war concentrate on the legal challenge by its candidate against the election of President Buhari if indeed they have any faith in the country's judiciary, and desist from unnecessarily overheating the polity," he said.

Only the guilty are afraid - Atiku

In his reaction through a statement by his media adviser, Mazi Paul Ibe, the former vice president described the accusations by the Buhari administration as "despicable."

"Atiku Abubakar is a man of peace and a thoroughbred democrat. It is preposterous that those who threatened to 'soak the dog and the baboon in blood' are now audacious enough to point the finger at lifelong democrats. Truly, if the farmer does not raise the alarm on time, the thief will accuse him of being a thief.

"How can a man who wined and dined with Nigeria's most brutal dictator, how can a man who overthrew a democratically elected President and held a grudge against him even in death (as evidenced by the empty condolence register he left in Sokoto, last year) accuse a man who has never been as much as associated with such tendencies, of being an anti-democrat?

"We want to know why the desperation on the part of the Muhammadu Buhari government to rope in the Peoples Democratic Party and its Presidential candidate in phantom plots? Obviously, President Buhari wants to replay the Phantom plot saga of his now deceased mentor, who threw former President Olusegun Obasanjo in jail after falsely accusing him of treason in order to perpetuate himself in power.

"If anybody is 'beating the drums of war', it is precisely those who have issued statements threatening Nigerians and foreigners alike with 'body bags'." The statement said Atiku was among those who worked to give rise to the democracy that the current government is now trampling on.

Meanwhile, the PDP, in a statement by its National Publicity Secretary, Kola Ologbondiyan, said Mohammed's accusation showed the frustration of a failed government seeking excuses and scapegoats, instead of accepting its failures and self-inflicted woes.

"It is incontrovertible that the PDP, as a highly responsible political party, committed to the unity and stability of our dear nation, nurtured our democracy for 16 years and has continued to express its full respect for every arm of government including the judiciary.

"It is equally undisputable that the All Progressives Congress (APC), within a period of four years, has wrecked our democratic structures, relegated and harassed judicial officers, disregarded our laws and judicial pronouncements, divided our people and practically brought our nation to its knees only for them to now turn to look for scapegoats where there are none.

"It is instructive to state that, in the course of serving our dear nation for sixteen years, the PDP was never known for intimidating and harassing judicial officers at any level.

"It is therefore unfortunate that the Minister of Information and Culture could suddenly recourse to making irresponsible allegations against the PDP and our presidential candidate instead of accepting their failures," the party said.

It described as awkward for the APC and its government to make frivolous allegations against our party and Presidential candidate.

"It is manifestly clear that the PDP and our presidential candidate are in court to seek justice and the issues of bias raised by our party are in public domain and in the general interest of majority of Nigerians who gave their Presidential mandate to Atiku Abubakar.

"The PDP therefore charges the Federal Government to stop inventing excuses and making frivolous allegations of treason for its mass failures," the PDP said.

Judge Withdraws From Atiku's Nigeria Poll Tribunal
Tagged:
Copyright © 2019 Daily Trust. All rights reserved. Distributed by AllAfrica Global Media (allAfrica.com). To contact the copyright holder directly for corrections — or for permission to republish or make other authorized use of this material, click here.