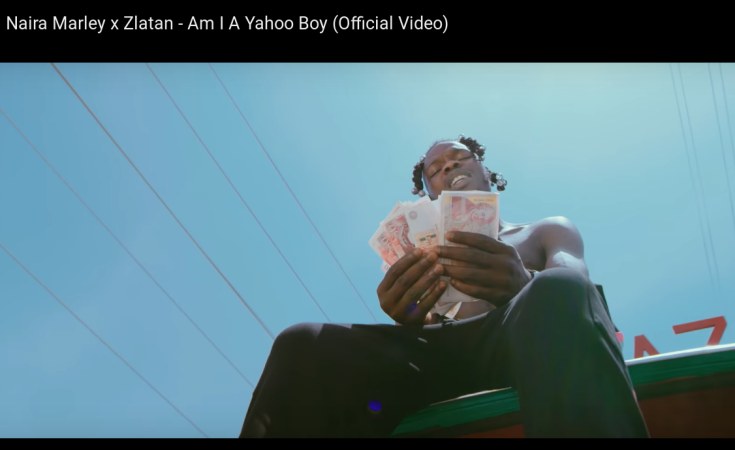 Screenshot/YouTube
Naira Marley in his video Am I A Yahoo Boy.
Vanguard (Lagos)
By Rotimi Agbana and Tolulope Abereoje

After five days of intense grilling in EFCC detention, rap music rave of the moment, Zlatan Ibile, Rahman Jago and two others have secured temporary release, while Naira Marley remains in detention as a result of "incriminating evidences" the anti-graft agency claim to have against him.

"Kudos to Olamide and Burna Boy! These people showed love when we needed people. Don't let anybody deceive you on Instagram that it was someone that got a lawyer," Aremo Gucci said.

However, explaining why Naira Marley wasn't released alongside Zlatan and the three other suspects, EFCC spokesman, Tony Orilade said the four suspects were only released on administrative bail.

"There is overwhelming evidence against Naira Marley; so we can't afford to release him on administrative bail like Zlatan and the three others. That Zlatan has been released does not mean they have been discharged and acquitted. Naira Marley is still in our custody and will be charged to court soon and we will make the charges known in an official statement soon", he said.

Meanwhile, Davido has refused to speak on the matter but simply celebrated the rapper's release by saying, "Zanku is free! People really love you. Now, it's time to go back to making history."

Naira Marley Shares Prison Experience, Vows to Help Inmates
Tagged:
Copyright © 2019 Vanguard. All rights reserved. Distributed by AllAfrica Global Media (allAfrica.com). To contact the copyright holder directly for corrections — or for permission to republish or make other authorized use of this material, click here.