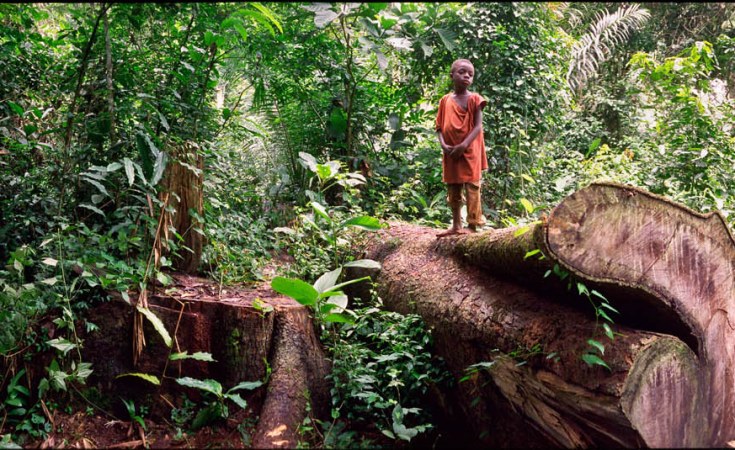 Arrests, torture, murder: Is there a link between environmental protection organization WWF and brutal action taken by park rangers in Africa against civilians? Payments by Germany and the EU are also being scrutinized.

"We are being persecuted and threatened," a woman of the Baka ethnic group in the Congo Basin region of central Africa told the human rights organization Survival International.

The organization has been collecting similar testimonies for years and compiles critical reports about human rights violations against indigenous peoples in nature reserves or national parks.

In recent years, the complaints of the Baka people have become louder and louder. The area where they live, the forests of Messok Dja in the Congo Basin, is being transformed into a national park under the direction of the WWF, the World Wide Fund for Nature. This part of the Congo has been declared a priority territory for the protection of great apes and is considered to be Africa's last elephant stronghold. The project is financed by European and German taxpayers.

The project is hated by the local population. The Baka feel harassed by the gamekeepers in the future national park. They have lived in the forests of Messok Dja for generations. "I am Baka, my father is Baka, my mother is Baka. Our ancestors entrusted this forest to us. Our food comes from the forest. When we are sick, we go there and collect our medicine," says a Baka woman. One day her children should also look for food in the forest. But now the forest is out of bounds, she says. The Baka people have been deprived of their habitat.

According to Survival International, more and more indigenous communities in Africa are becoming victims of an unscrupulous conservation industry. In recent years, the organization has repeatedly published photos, videos and testimonies of serious human rights violations by WWF-funded gamekeepers in the Democratic Republic of Congo, Cameroon and the Central African Republic. The accusations range from arbitrary arrests to torture and even targeted killings.

The planned nature reserve Messok Dja is only one of many examples. One of the main accusations: gamekeepers or rangers receive a bonus for every poacher they arrest. This motivates the rangers to arrest as many people as possible - whether they are guilty or not. "With this system of premiums, more and more incentives are being created to arbitrarily arrest people and for violence to escalate further," Linda Poppe from the Berlin office of Survival International said in an interview with DW.

In the case of the Messok Dja area, the money for the premiums comes from the European Union, while the German government also finances so-called "performance-related payments" for rangers, which includes bonus payments, in the Salonga National Park in the Congo Basin, Poppe said. The WWF also pays bonuses to rangers there.

That gamekeepers receive bonuses is a completely normal thing and occurs regularly in many African countries, WWF spokesman Immo Fischer told DW. Gamekeepers do an extremely dangerous and important job and should be rewarded when they are successful, he said. One reason is to prevent corruption. "You must think that if a gamekeeper catches a poacher in the act, and this poacher is on his way with two elephant tusks, then the value of these tusks quickly exceeds the annual salary of the ranger." The bonus payments for the rangers are intended to prevent poachers buying themselves free, Fischer said.

Linda Poppe does not accept that argument. Corrupt gamekeepers are the wrong partners, she says. "You should rely on the indigenous people who live in these areas and who are often driven out to make way for nature reserves but who are actually the best allies of conservationists," she said. They were the ones being punished. In her view, the system contains the wrong incentives.

Is the German government partly to blame?

Human rights problems in protected areas in Africa which are co-financed by Germany have been the subject of several parliamentary initiatives in the Bundestag.

Eva Schreiber of the Left party repeatedly emphasizes the joint responsibility of the German government and public institutions such as the Bank for Reconstruction (KfW) or the international cooperation organization Deutsche Gesellschaft für Internationale Zusammenarbeit (GIZ). "For us as members of parliament, the question "What does the federal government finance?" is of central importance," Schreiber told DW.

In her view, the government carries the main responsibility. She is particularly concerned by the fact that taxpayers' money, which is earmarked for development cooperation, is used to finance protected areas in which local development is not the focus. "In these nature parks, the interests of a very conservative nature conservation organisation are represented in a very one-sided way. The organization acts in a very authoritarian manner on the ground and is perceived as a threat by the local population," she said.

According to Schreiber, a colonial-era view of nature in Africa often accompanies conservation projects financed by Germany. The African continent is frequently seen as an empty space where jaguars, elephants and lions roam. In reality, however, nature conservation can only succeed when local people are involved, and the German government must not forget that, Schreiber said.

In the meantime, the German government has announced that the KfW bank and the GIZ will conduct a study "that will investigate how protection for human rights in nature conservation projects in the Congo Basin can be better taken into account."

CAR Continues Its Mission to Disarm Rebels
Tagged:
Copyright © 2019 Deutsche Welle. All rights reserved. Distributed by AllAfrica Global Media (allAfrica.com). To contact the copyright holder directly for corrections — or for permission to republish or make other authorized use of this material, click here.