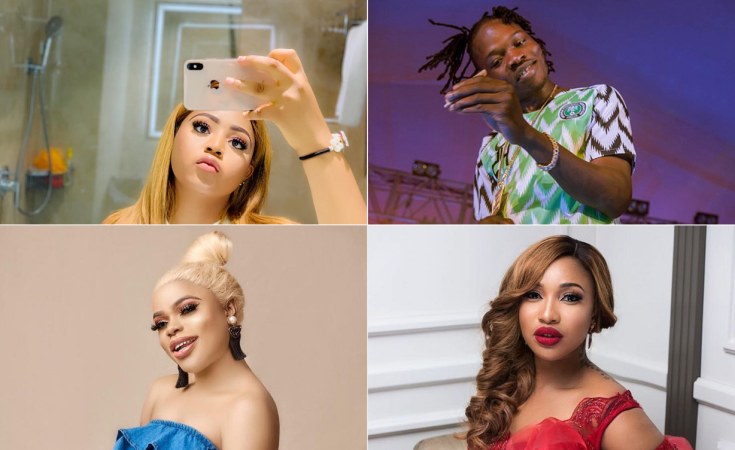 2019 has been a year of controversies, not just in the political realm, but also in the entertainment world. For the past months, Nigerians have been waking up daily to read about who would be the latest controversial personality on the internet. However, until date, none has beaten the five personalities Anthony Ada Abraham is writing about...

Nollywood actress, Tonto Dikeh, can easily be described as two women in one body. The one and only mother of King Andre! She has managed to stay famous with her very interesting lifestyle on social media. Proud to be a dedicated mother, she also went under the knife to enhance her behind. Her decision to go under the knife was heavily popularised and even landed her a reality TV show with Linda Ikeji. The show did not go as planned when her estranged husband, Churchill dragged her to court over featuring their son in the adult content filled show. Another controversy threw the internet into a state of chaos after spewing out unbelievable allegations about her ex-husband and father of her son, Olakunle Churchill. In an hour-long video which was split into three, the actress and mother of one recounted her married life with Churchill, how they allegedly lived a life of lies due to her ex-hubby's insincerity. She also went on to condemn Churchill's mum who was a party to the life of lies. According to the her, she sponsored their wedding, Churchill is fetish, uses jazz (charms), he is a 419, Yahoo boy, a fraudster and a 40-second-man.

'His sex life was horrible. He was dating a lot of ladies while married to me. There was a day after our wedding that I met him dry-humping some girl, she looked so dirty. When I saw him, he went on to say, 'oh no, she's my friend's sister'. He has a sexual problem. He can't stay inside a woman for more than 40 seconds. My son was the longest, one minute. I felt like he was going to be ashamed of that condition so he doesn't sleep around but I didn't see his womanising part, it was later I noticed," she explained.

This artiste woke a very controversial corpse of internet fraud. The musician known as Naira Marley who called on Nigerians to pray for Yahoo Boys rather than condemning them, stated in a viral video that Yahoo Boys were the reason money is circulating to the common man.

According to him, money will stop circulating to common man and remain controlled by likes of Olusegun Obasanjo, Asiwaju Tinubu if 'Yahoo' is stopped in Nigeria.

In the viral video, he said: "Pray for internet fraudsters instead of criticizing them, so there will be free circulation of money in Nigeria.

"Nigerian leaders are stealing all our money and keeping it to themselves. If Yahoo is stopped, everyone of you would stop seeing money," he said. But that didn't go down well the anti-graft agency as Zlatan Ibile, the originator of Zanku, Naira Marley and 2 others were picked and questioned by the EFCC. Though they have been released, Naira Marley still remains in the EFCC custody. It was gathered that Naira Marley was held down because of the incriminating documents found on his laptop. His controversy continues.

Nigerian internet personality, Idris Olarenwaju, known as Bobrisky is one of the most controversial personalities till date. He overtook Maheeda whose posts people no longer see on Instagram. The she-male who is now a bestie of Tonto Dikeh has claimed he's more woman than a man. He also delved into acting which received lots of lash backs. He didn't stop there as just recently, has revealed that he has cut off his manhood. The so-called celebrity transgender disclosed this in a post on his Instagram handle on Tuesday.

According to him, he cut off his sexual organ because he does not need it.

He wrote, "Okay, let me help you all, those of you asking where is my (manhood) I don cut am since. What would a fine girl like me be doing with a gbola. I hope I have answered all your questions." When asked if he felt pain during the process, he said, "small pain."

James Brown aka "They Didn't Caught Me"

James Brown aka 'they didn't caught me' is the youngest Bobrisky in town. The young man gained the internet attention when he got arrested by the Nigerian police for being apparently gay. Being one with a quick wit, he spoke to stating he was arrested wrongfully because he is not gay and was detained despite his health condition.

His video immediately went viral and his phrase "they didn't caught me" stuck on quick and people started referring to him as that. With the rather negative attention, James manage to turn it into good by showing the internet his loving personality. Overnight his followers on Instagram grew and he became yet another controversial celeb. He also lashed on Bobrisky who he said lied about his parents and personality. He recently released a video when he was dancing and looks like a lizard.

Teen actress, Regina Daniels, is known to be one of the most beautiful young actresses in the movie industry. Her beauty and sheer attractiveness have earned her the admiration of many Nigerians. After young actress shared some pictures on her Instagram page, clad in a swimsuit, the floral swimsuit showed off her curvy shape and figure. This was made more pronounced by the scarf she tied around her hip and her protruding oranges. Her followers said they were fallen and less attractive than they used to be. Maybe because she's now dating an older man who has been the apple of her small eyes. The actress who recently married billionaire Ned Nwoko has shown herself having fun on several occasion not minding what people think about her.

The young actress has been in a heat of controversy for the past few weeks over her marriage to the 59-year-old politician and businessman. Easing off the pressure, in a new post on Instagram, Daniels put on a show for her teeming fans as she twerks to make herself happy. In her post, the actress wrote "Can't dance to save my life." She has also be seen cruising the luxurious of cars money can buy.

Here are Nigeria's Top Google Q&As for 2019!
Tagged:
Copyright © 2019 Leadership. All rights reserved. Distributed by AllAfrica Global Media (allAfrica.com). To contact the copyright holder directly for corrections — or for permission to republish or make other authorized use of this material, click here.