Malawi: President Mutharika - 'It's Quite Obvious That We're Going to Win' 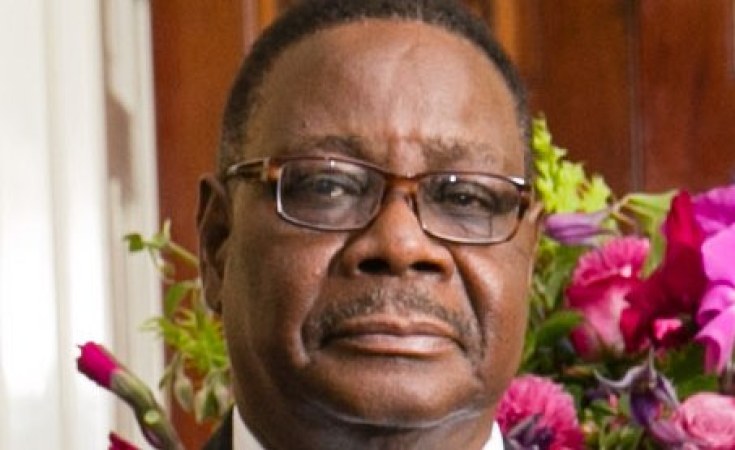 On the eve of elections in Malawi, President Peter Mutharika gave DW an exclusive interview. Talking to DW's correspondent Adrian Kriesch, Mutharika accused the opposition of paying foreigners to rig the elections.

Malawians go to the polls on Tuesday, May 21, to elect the president, parliament and local government councilors. Incumbent President Peter Mutharika of the Democratic Progressive Party (DPP) is running for a second term in office. In an exclusive interview with DW, he leaves no doubt that he expects to win and levels some serious accusations at his opponents.

DW: Some of the opposition candidates came up with innovative ways to attract the vote of youths. Some are doing push-ups on the stage. Others are performing rap songs. How are you trying to get the younger generation to vote for you since it makes up the majority of registered voters?

Peter Mutharika: Indeed, I think I've introduced various programs for the youths. For example, for the first time in the history of this country, we have community-technical colleges over the country. So far we have built eight, one in each district. And then beginning in July-August, we'll build another 193, in each of the 193 constituencies. And in those colleges, they use their learning skills, like carpentry, ICT, brick-laying, planning, welding, and so forth. And very successfully. So far we have graduated over 2000. And many have jobs. So I'm empowering the youths.

At the moment, only 37% of primary graduates go to secondary school -- only 37%. I want, in the next five year, 100% to go to secondary school. And then they can go to community colleges after that or university. So those are programs I've been doing for youths. Push-ups don't help the youths at all. That's just symbolic and silly, to be honest with you. I'm doing programs that empower the youths, they will have skills, they'll be self-employed, and they'll be contributing to the economy of this country.

But still, if you go out and talk to the young people on the streets, many are not happy. Many of those I've spoken to told me there are no job opportunities for them, and they don't see a future anymore.

Well, we can't help everybody. Over 50% of the county is youth, as you say. That's eight million youths. No country, not even Germany, or the United States, can employ all their youths. It's not possible to employ everybody. But we're doing our best. You see, the thing is, ok, they're telling on the streets that they are frustrated that they have no jobs. But what jobs, if you have no training? That's why I've started to get those community-technical colleges.

The majority of the country is younger than 30 years. What do you say to those who argue that the time has come for the younger generation to provide the leadership of this country?

The question of age doesn't really matter. Actually what matters is, whether you have innovative ideas you can contribute. I do have ideas. I know what a country needs to move from poverty to prosperity. And that is exactly what I'm doing and intend to in the next five years.

People still hotly debate the issue of corruption in this country. Your former vice-President and now an opposition candidate Saulos Chilima claims that you are not serious about stopping theft.

He's wrong because he's disgruntled. So he has to say that. The point is we are fighting corruption. Many, many people are being tried already. About 17 people have been convicted in "Cashgate" [Corruption scandal involving high-level government officials uncovered in 2013]. One was sentenced last week too, I think, 13 years, one of the major people. I'm also investigating many cases. That's still going on. The Anti-Corruption Bureau, the Directorate of Public Prosecutions, the fiscal intelligence agency, and the fiscal police, they are all working on the investigations. But you're right, it's a very difficult thing to do because these are very smart people. We are dealing with very sophisticated people now, with computers and what's happening now white-collar crime. It's not easy to detect. Sometimes we don't have enough resources. But the truth of the matter is there is no more corruption here than in other countries in the world. And we're doing our best to make sure that we fight this scourge.

Would you say that Malawi has a corruption problem, or not really?

During one of your campaign rallies, you actually that some of the opposition parties hire foreign professionals from Russia, Nigeria, and India to rig the elections. Do you have any evidence for that claim?

So why haven't you put it on the table?

We'll take action at the necessary time. We're working on it. But we do have evidence. But the point is: there are all those things, allegations that are always made about rigging. In every election since democracy in 1993, in every election, those who have lost have claimed that the election was rigged. That's the story of Africa. If you won an election, then it was fair and transparent. If you have lost it was corrupt, it was rigged. All over the continent. So it's nothing new.

But you are the president of the country. You make a very strong claim against the other nations. Don't you think you should back it with evidence when you say things like this?

To whom should I give the evidence?

I think if you give a statement like this and you're blaming citizens of another country for it, of course, they would be concerned.

I only say that there are people we know, they are Nigerians and Russians and Greeks, and we know they are here. We know they are here, we know who they are. That's a fact. Immigration knows that. And our intelligence services know that. I mentioned that merely to discourage them, that they should stop that foolishness? But you know these things happen. You heard about the American elections, the whole thing with the Russians. Whether it was true or not, I don't know. But these things do happen.

That's precisely why I'm asking. Because people are of course concerned it they hear this kind of news. So to clarify: nobody has been arrested in relation to ...

So far nobody has been arrested.

But the investigations are still going on.

You said earlier that there is a problem on the continent, where very often those who lose elections do not accept the results, and then allegations of rigging will come up.

In case you should lose this election and the electoral commission declares somebody else the winner, would you accept the result?

Peter Mutharika was elected president of Malawi in 2014.

Joyce Banda Encourages Malawians to Step Out and Vote

Mutharika Takes Lead As 80% of Malawi Poll Results Emerge
Tagged:
Copyright © 2019 Deutsche Welle. All rights reserved. Distributed by AllAfrica Global Media (allAfrica.com). To contact the copyright holder directly for corrections — or for permission to republish or make other authorized use of this material, click here.