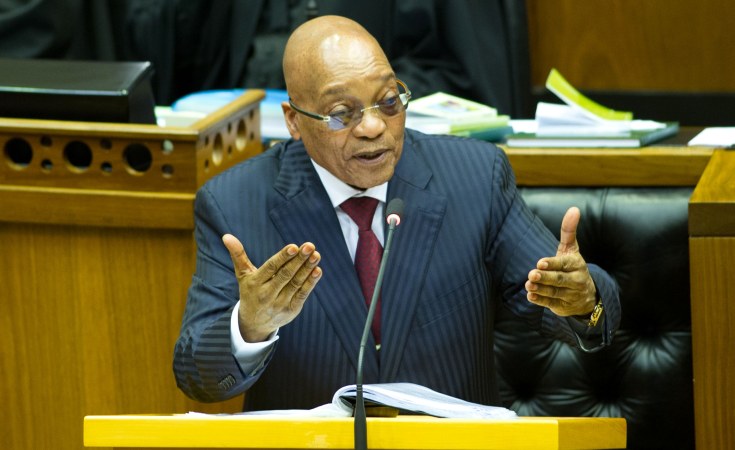 During then-president Jacob Zuma and French arms dealer Thale's application for a permanent stay of prosecution on Monday, advocate Muzi Sikhakhane SC turned to transcripts of the Spy Tapes to illustrate that Zuma was victimised.

Sikhakhane's aim in reading sections of the Spy Tapes into the record was two-fold: "I want to show the disdain with which they discuss Mr Zuma," he told the Kwazulu-Natal High Court in Pietermaritzburg.

He also used this as his hammer to drive home the sharp wedge of his argument - that the National Prosecuting Authority acted "unconstitutionally" in the way it handled Zuma and the corruption charges against him.

Advocate Thabani Masuku was up next and he drove the point home.

The NPA had acted unconstitutionally, he declared.

Sikhakhane urged the court to look at the full Spy Tapes transcripts. Here are the sections he read out to the court:

BN: Howsit bru? Do you remember a CV I gave you for the guy from the presidential protection unit? [Sikhakhane skips quickly through] I would recommend this guy for you especially.

BN: No seriously, I seriously recommend him.

"I am introducing it because it's the casual nature of the discussion about very serious things," Sikhakhane said.

On Supreme Court of Appeal Judges

LM: I just wanted to say, between you and me, that was the last time that I, Leonard McCarthy, try to predict the outcome of a judgment.

"I am raising this because these people are a law unto themselves," Sikhakhane said.

LM: You know that c**t, Ian Farlam [retired judge] and Tom Cloete, they were fighting with Kemp and Zuma so much so that we all thought they were on our side. They were actually ridiculing them.

LM: At some point Farlam apparently said to this guy, stop, or is it Tom Cloete who said to Kemp, stop, stop, tell me what is wrong?

BN: Yes, what is it that they have taken that does not fall within the confines of the warrant?

LM: So you read the judge's body language?

LM: And then they come and f***ing spin around just like that to drop you.

BN: No, they dropped us.

LM: No, I am saying we won in the end but it was damn close thing. It was three-two.

BN: Are you serious? Three judges for us, who are regarded as batting for us? That's Farlam and Cloete who turned at the last minute and gave us a dissenting judgment.

LM: Both of them? Jesus!

BN: And the one you said you thought he was not with you, who was it?

LM: No they say, uhm, there was this one guy, this one judge, Ponan, the Indian guy. He asked nothing.

LM: Dunstan Mlambo asked one or two questions. Both Farlam and Cloete went for the other side. Robert Nugent in the beginning asked some very tough questions. In the end Ponan and Mlambo came through for us.

On Mbeki's loss in Polokwane

BN: It's Mpumalanga, Free State and Natal man that is giving us a real problem.

BN: We knew that we were going to lose, but we did not think that and its obviously... it's not natural Leonard, when you have your president being rejected by such a huge majority in a province like that, you would find, I mean, you find for example that if you look at all the provinces you can look and see that people have a difference of opinion, different views.

The real picture will emerge at the conference, and these guys cooked the books, and I agree with you absolutely, something very very ugly...

Save us from the madness

LM: I thought they were, they were pro-president? That's what it read. They were last week, last week they were. (Laughs) Today they've changed.

BN: Because they have seen the winds.

BN: So you are the only one who can just save this country from the madness.

BN: You know, I just can't believe this thing. I can't believe it, man. I don't know. So we are all busy now doing some soul searching.

BN: And what does the big man say? Is he all right?

I did what you said

LM: But I will call you when I am up there again. At this stage my flight is on Thursday. I did what you said I should, I must say.

LN: Up until Friday then I received a strong memorandum to say charge, and charge now!

LM: Ja no, this Friday. The team says we have been f***ing around with this thing. And we are allowing ulterior considerations to play in and it will become an impossibility later. We must take action with it, and finish and klaar as Jacki Selebi said. But that's another story.

This last section Sikhakhane said, was "one of the key things that demonstrated that Leonard McCarthy was unlawfully discussing charging with somebody who was not in the NPA".

Ngcuka had left the NPA at that stage.

The matter continues, with Masuku addressing the court.

Zuma is expected to address a sizeable crowd gathered outside the court later this afternoon.

Previous Story
Next Story
There Is a Witch Hunt Against Me, Zuma Tells Supporters Outside Court

There Is a Witch Hunt Against Me, Zuma Tells Supporters Outside Court

Museveni Sworn In, Vows to Ensure Welfare of Ugandans
Trade