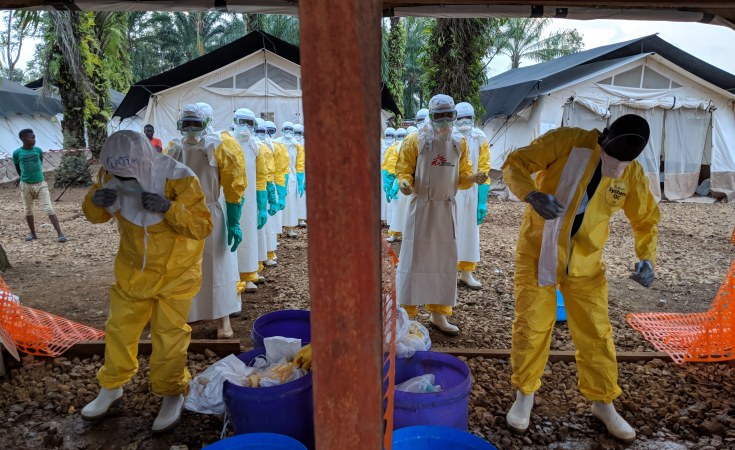 Huster/MSF
A team that has just finished setting up a tent in the high-risk zone in the Ebola treatment centre, getting out of their personal protective equipment (PPE). It’s hard work, and harder still in such attire. Photographer: Karin
World Health Organization (Geneva)

Kinshasa/Butembo (23 May 2019) --With the Ebola epidemic in the Democratic Republic of the Congo now in its tenth month and the number of new cases increasing in recent weeks, the United Nations announced today measures to strengthen its response and end the outbreak.

The Ebola epidemic has claimed more than 1,200 lives and the risk of spread to other provinces in the eastern Congo as well as neighbouring countries remains very high. A third of those who have fallen ill are children, which is a higher proportion than in previous outbreaks.

Under the leadership of the Government and Congolese communities, with support from the UN and non-governmental organizations (NGOs), the response has contained Ebola in parts of Ituri and North Kivu provinces. But ongoing insecurity and community mistrust in the response continue to hamper access to communities. This is hindering efforts by WHO and the Ministry of Health to detect sick people and ensure access to treatment and vaccination, ultimately leading to more intense Ebola transmission.

In view of the increasingly complex environment, the UN in partnership with the Government and all partners is now strengthening its political engagement and operational support to negotiate access to communities; increasing support for humanitarian coordination; and bolstering preparedness and readiness planning for Goma and surrounding countries. WHO is adapting public health strategies to identify and treat people as quickly as possible; expanding vaccination to reach and protect more people; and redoubling work to end transmission in health facilities.

The UN Secretary-General has established a strengthened coordination and support mechanism in the epicenter of the outbreak, Butembo.

MONUSCO Deputy UN Special Representative of the Secretary-General (DSRSG) David Gressly has been appointed UN Emergency Ebola Response Coordinator (EERC) in the Ebola affected areas of the DRC. Mr. Gressly, who brings a wealth of humanitarian leadership and political and security experience to the role, will report to the SRSG, Leila Zerrougui. He will oversee the coordination of international support for the Ebola response and work to ensure that an enabling environment--particularly security and political--is in place to allow the Ebola response to be even more effective.

Mr. Gressly will work closely with WHO, which will continue to lead all health operations and technical support activities to the Government response to the epidemic. Dr. Ibrahima Socé Fall, Assistant Director-General, Emergency Response, who has been in Butembo since end-March, is leading the WHO response in DRC. WHO will also continue to coordinate public health interventions that are being implemented by other UN partners.

"The Ebola response is working in an operating environment of unprecedented complexity for a public health emergency--insecurity and political protests have led to periodic disruptions in our efforts to fight the disease. Therefore, an enhanced UN-wide response is required to overcome these operating constraints and this includes moving senior leadership and operational decision making to the epicenter of the epidemic in Butembo. We have no time to lose," said DSRSG Gressly.

WHO's Dr. Fall said: "This system-wide and international support is exactly what WHO has been calling for. We know that the outbreak response must be owned by the local population, and this new approach reflects what they have asked for: better security for patients and health workers, wider access to vaccination, and a more humane face to the response." Dr. Fall has been working alongside Dr. Michel Yao, the WHO Ebola Incident Manager who has been in place since August 2018. In Kinshasa, WHO has also appointed a special representative to the Ebola Response, Dr. Peter Graaff, to coordinate with partners there.

Financial planning and reporting will also be strengthened and efforts will be accelerated to ensure sustainable and predictable funding required for the Ebola strategic response plan considering the ongoing needs.

Previous Story
Next Story
As Ebola Cases Rise, So Do Worries of a Cross-Border Epidemic

As Ebola Cases Rise, So Do Worries of a Cross-Border Epidemic

Aid Community Raises Highest Alert On DR Congo Ebola
Tagged:
Copyright © 2019 World Health Organization. All rights reserved. Distributed by AllAfrica Global Media (allAfrica.com). To contact the copyright holder directly for corrections — or for permission to republish or make other authorized use of this material, click here.