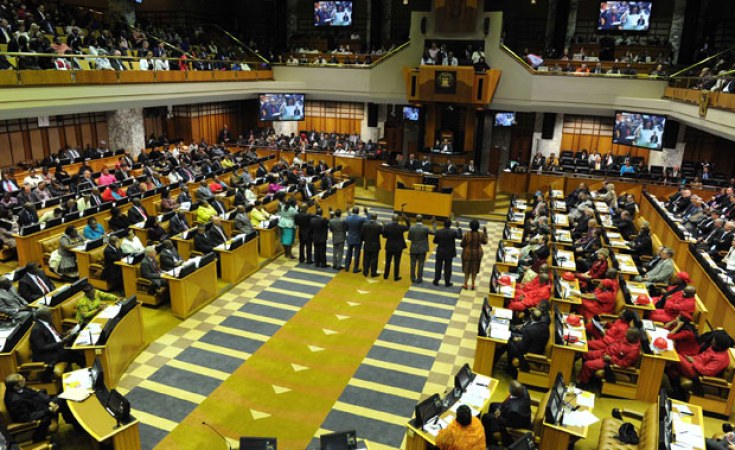 Photo: GCIS
Swearing-in ceremony of Members of Parliament in the National Assembly (file photo).
This is Africa (Hilversum)
By Kylie Kiunguyu

South Africa's youngest legislator ever, 21-year-old Itumeleng Ntsube of the African National Congress, was sworn into office on 23 May as a member of the National Council of Provinces, the country's upper House of Parliament.

Itumeleng Ntsube is now South Africa's youngest ever member of parliament (MP). A member of the ruling party, the African National Congress (ANC), he hails from Botshabelo in the Free State, the province where South Africa's judicial capital is situated.

According to the media service Africa News, Ntsube was accredited by parliamentary office bearers at an orientation session in Cape Town earlier this month. The EWN news site also reports that he had enrolled at the University of the Free State in Bloemfontein last year to pursue a degree in education. He will now move to a university in Cape Town to continue with his studies while he undertakes his new role.

"I'm 21 years old. I serve as the provincial chairperson of the Congress of South African Students in the Free State. On 21 May, we came to Parliament to be acclimatised with all the processes and what's expected of us," Ntsube is quoted saying.

South Africa has a bicameral parliament (two Houses), supported by a joint administration. The NCOP comprises 90 provincial delegates - 10 delegates for each of the nine provinces, regardless of the population of the province. This means that each province is equally represented in the NCOP. The council is elected by the provinces and represents them to ensure that provincial interests are taken into account in the national sphere of government.

The other House of parliament is the 400-member National Assembly. Members of this lower House are elected every five years on the basis of a party list and proportional representation.

Political analyst Ralph Mathekga is quoted in Press Reader as saying that the inclusion of young people showed that some parties are conscious of the need that young people have to make their voices heard.

Other young MPs include 23-year-old Sibongiseni Ngcobo of the Democratic Alliance, 25-year-old Naledi Chirwa of the Economic Freedom Fighters and 25-year-old Nompendulo Mkhatshwa of the ANC.

Is David Mabuza In With a Chance as South Africa's Number 2?
Tagged:
Copyright © 2019 This is Africa. All rights reserved. Distributed by AllAfrica Global Media (allAfrica.com). To contact the copyright holder directly for corrections — or for permission to republish or make other authorized use of this material, click here.