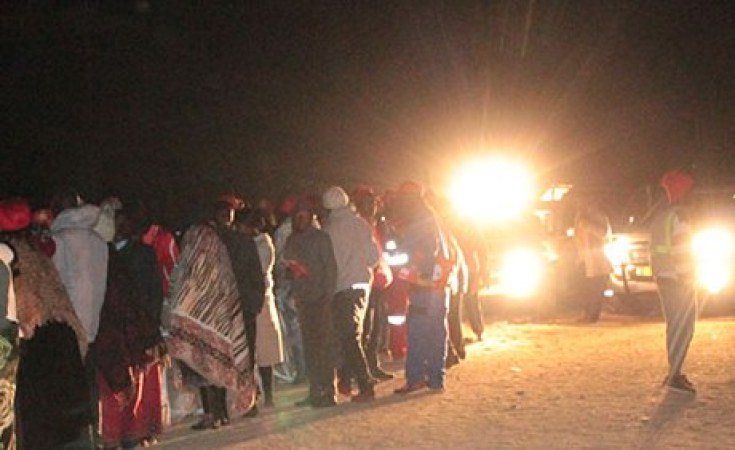 Idah Mhetu/New Zimbabwe
The MDC resorted to car headlights when an unexpected power cut threatened to throw the party’s election process into disarray at Ascot Stadium in Gweru, late on Sunday evening.
The Herald (Harare)
By Munyaradzi Musiiwa in Gweru

Chaos has marred the MDC-Alliance congress amid allegations of massive vote buying by candidates and delays in the voting process while party members endured extremely cold temperatures after being made to sleep in the open at Ascot Stadium.

Two aspirants for the post of vice president, Professor Welshman Ncube and Mr Tendai Biti, are alleged to have donated food to supporters, a move seen as vote buying.

By the time of going to print last night, only two out of 13 provinces had voted, and indications were that the voting process would continue today. The congress was initially scheduled to run from May 24 to yesterday. On Saturday, MDC-Alliance leader Mr Nelson Chamisa told party supporters his outfit had developed a culture of vote buying and imposition of candidates.

He also bemoaned his party's rowdy youths who have been ensnared by some party candidates using beer.

"Yes, it is true that Prof Ncube bought meat while Mr Biti bought maize for the people attending the congress," he said.

This move has been criticised by some party members as vote buying.

Mr Biti, Prof Ncube and Mr Morgen Komichi are battling it out for the post of vice president.

Mr Chamisa is uncontested for the position of party president after his sympathisers unleashed violence on Mr Douglas Mwonzora's supporters in the build up to the congress in a move designed to intimidate them from advancing his cause.

Mr Mwonzora was battling it out with Mr Charlton Hwende for the position of secretary-general, which he holds going into the congress.

Meanwhile, in a comical twist to events in the beleaguered MDC-ALLIANCE, an executive meeting held last Friday exposed Mr Chamisa's hypocrisy after it invited members based on the structures of MDC-T's 2014 congress.

Paradoxically, Mr Chamisa, who usurped power from Ms Thokozani Khupe and declared himself leader of the opposition party a few hours after the death of the party's founding president Morgan Tsvangirai, was a mere member of the executive.

The High Court recently ruled that the decision by the late MDC-T president Mr Tsvangirai to hand-pick two additional vice presidents was illegal, and directed the party to hold an extraordinary congress within a month using the 2014 structures.

We Will Give Mnangagwa Sleepless Nights, Chamisa Tells Party
Tagged:
Copyright © 2019 The Herald. All rights reserved. Distributed by AllAfrica Global Media (allAfrica.com). To contact the copyright holder directly for corrections — or for permission to republish or make other authorized use of this material, click here.