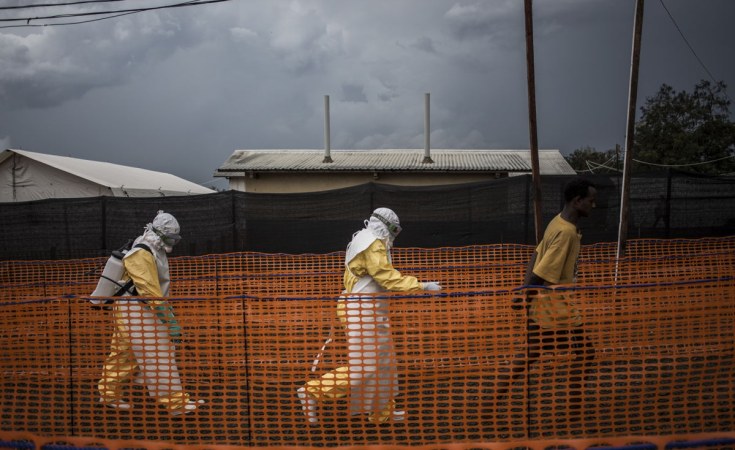 London — After more than 1,240 deaths since the Ebola outbreak was declared in the Democratic Republic of Congo last August, international agencies and partners are calling for a reset in the Ebola response - requiring the adoption of a strengthened strategy centred on community ownership.

This is an important move, drawing on lessons from the 2013-2016 West African Ebola outbreak in which local community initiatives, learning, and action - supported by more respectful engagement from outside agencies - proved key to controlling it.

Yet how, in practice, to bring about this shift to community ownership is a pressing but unanswered challenge.

The affected provinces of North Kivu and Ituri have been subjected to years of conflict and escalating violence (including against response workers) - ongoing distrust and the circulation of mis- and dis-information are hindering efforts to bring the outbreak under control and avoid its spread to neighbouring countries.

Although some people in the affected areas still suggest that Ebola is not 'real', most do not question its existence but ask why it continues to spread. People see themselves as 'doing their part' to contain Ebola - washing their hands, agreeing to culturally sensitive but medically safe burials - and now question the motives of response teams. They view the significant financial and technical resources mobilised around Ebola as being at odds with the progress of the response. Some question whether financial interests and political agendas dampen the response's commitment to ending the outbreak, and frustrations are expressed when response teams attribute the spread of the outbreak to a lack of community buy-in.

In the context of North Kivu, ownership must go beyond conventional understandings of 'community': the population is highly fragmented, with shifting allegiances to a range of state and local authorities and non-state actors. People in the affected areas repeatedly emphasise the need to avoid empowering certain individuals or population groups at the expense of others, and to build trust across the numerous different population factions, particularly by adjusting response activities in light of local feedback.

The Social Science in Humanitarian Action Platform, a partnership between the Institute of Development Studies and Anthrologica with support from UNICEF, the Wellcome Trust, DFID and others, is mobilising networks of anthropologists, social scientists, and DRC experts to provide sociocultural and local context analysis that can be used in the design of effective and appropriate strategies to tackle the outbreak.

By understanding the origins of violent attacks against health workers and distrust in state authorities and international agencies, responders are better placed to develop strategies to mitigate these risks. By understanding where, how, and from whom different social groups seek healthcare, the everyday social, economic, political, and livelihood interactions that are significant to different people, and who they turn to for advice and reassurance, the on-the-ground realities of 'communities' come into view, informing a more inclusive response.

Across the response, an enhanced strategy of community engagement must deliver on repeated local requests for more in-depth knowledge about Ebola, the response, and treatment procedures. Local actors continue to affirm that improved information flows can de-escalate more politicised views of Ebola. Communities suggest more (facilitated discussion) forums in which they can ask questions and receive further detailed information about the virus, its treatment, vaccination, and response activities. Actors both opposing the response as well as those supporting it call for greater civilian access to laboratories and treatment centres in order to build familiarity with procedures used. Given the environment of distrust, granting more direct access will help to overcome 'fear of the unknown' and can constructively dispel misinformation.

Although the recent attacks are highly visible, communities continue to make repeated attempts to communicate peacefully with the government and national and international responders. Community members circulate announcements and situation reports from the WHO and other agencies via WhatsApp, demonstrating a determination to keep apprised of response activities. This level of engagement is positive and should be maximised. It should be the basis for the reset.

As suspected Ebola cases continue to go under-reported, people continue to present late at health facilities and treatment units, and those who are untreated continue to die at home, it is only through strengthening community-based surveillance and locally led response actions that the outbreak will be controlled.

In emphasising local ownership, stakeholders have suggested that positive incentives for community members to support the response would be welcome. These should not be in the form of individual financial remuneration, but suggestions include promoting a "best prevention prize" to award community groups, neighbourhoods, or villages who effectively support (and contribute to) the Ebola response. While such initiatives might appear marginal, their localised impact can be significant. During the earlier Ebola outbreak in Liberia, a similar initiative to provide communities with resources to implement their own projects for prevention and response was successful. In North Kivu, changing the approach to instigate broader community-level incentives may also help reduce suspicions regarding the perceived flow of Ebola money and power to the benefit of some individuals but at the expense of others.

Building capacities at the local level is, however, only part of the solution. 'Trust' works both ways. It is impressed on communities that they must trust the response, but it is vital that the response trusts communities. In North Kivu this is made more challenging due to the ongoing insecurity and attacks against response workers. But creating more space to enable meaningful community participation in this context is urgently needed.

This will not be an easy reset, but it is essential if the current outbreak is to come to an end.

With grateful acknowledgement of the contributions to SSHAP from the teams at IDS (Annie Wilkinson, Santiago Ripoll, and Hayley MacGregor), Anthrologica (Ingrid Gercama, Theresa Jones) and from the expert advisory networks, particularly Rachel Sweet (Harvard and University of Notre Dame).

Strengthened Effort Against Ebola Is Paying Off, but Insecurity Still Major Constraint - UN

Number of Ebola Cases in DR Congo Tops 2,000
Tagged:
Copyright © 2019 The New Humanitarian. All rights reserved. Distributed by AllAfrica Global Media (allAfrica.com). To contact the copyright holder directly for corrections — or for permission to republish or make other authorized use of this material, click here.