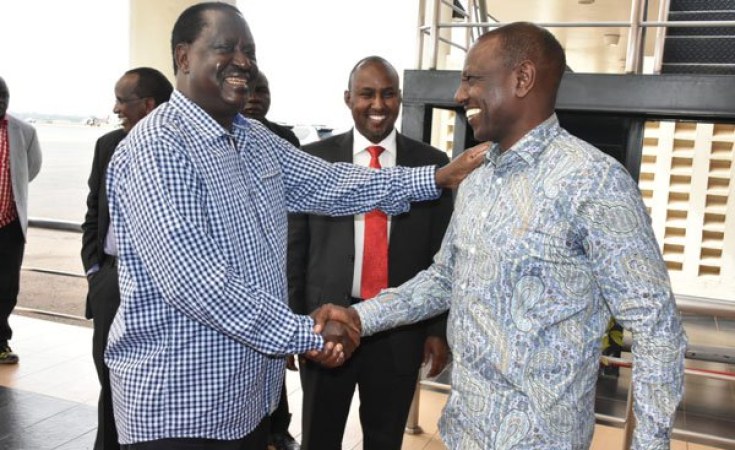 Opposition leader Raila Odinga has denied claims made by Deputy President William Ruto that he helped the former prime minister secure a job at the African Union.

Mr Odinga reacted on Monday after Dr Ruto asked him to focus on his infrastructure development mandate and leave the crime docket to the government.

Speaking at a Sunday Service in Naivasha, Dr Ruto claimed that Mr Odinga's job description had nothing to do with whistleblowing or dealing in minerals.

He was referring to Mr Odinga's allegation that he blew the whistle on fake gold scam that has seen foreign investors lose billions of shillings to local and foreign cartels running riot in Nairobi.

"Negotiations of the AU position did not include prospecting for minerals or merchandise of any nature. All his job description involves is Africa's basic structure," he said.

But it is Dr Ruto's claim that he and President Uhuru Kenyatta negotiated the job on his behalf that angered Mr Odinga.

"We don't know what Ruto is party to and what he is not. If he had his way, he would be party to everything and anything," Mr Odinga's spokesman Denis Onyango told the Nation.

"What we know and I believe all Kenyans know is that Ruto can never be party to anything that uplifts Raila Odinga. If he was party to those talks, he must have joined to stop it but failed."

The MPs who also accompanied the DP in Naivasha asked Mr Odinga to record a statement with the Directorate of Criminal Investigations over the fake gold scam.

Before his appointment, the ODM party leader had over the years been at the forefront in the development of modern infrastructure as an economic enabler and as an instrument for regional and international integration.

He works from an office setup in Nairobi to coordinate his activities, and works hand-in-hand with the New Partnership for Africa's Development, Nepad, offices in various regions.

He embarked on his role by first visiting Namibia where he met officials of the National Port Authority to inspect expansion works at Walvis Bay Container Terminal.

Most recently, Mr Odinga visited the Democratic Republic of Congo and South Sudan and held talks with presidents Félix Tshisekedi and Salva Kiir.

Fallout After Ruto Claims He Hustled AU Job for Odinga