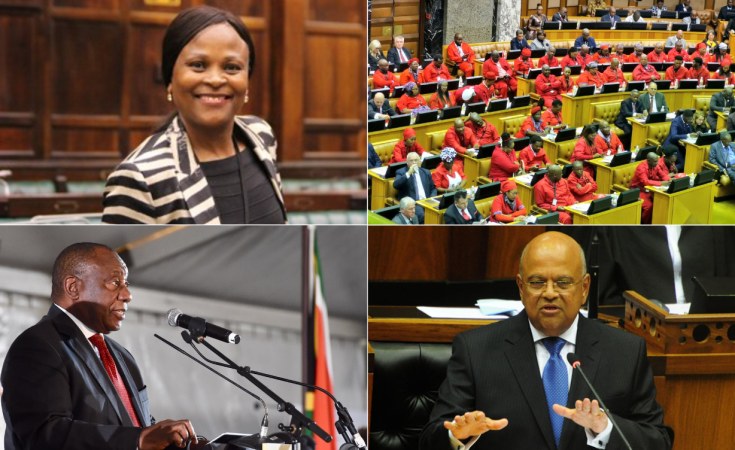 Public Protector Busisiwe Mkhwebane did not engage meaningfully with submissions made to her office while investigating a complaint involving Pravin Gordhan, Gordhan's lawyer Tebogo Malatji maintains.

He was speaking on eNCA's The Fix, which is hosted by Karima Brown, following a report released by Mkhwebane in which she found that Gordhan wrongly approved an early retirement package with benefits for former SARS deputy commissioner Ivan Pillay. He returned on a contract to SARS after retiring.

Mkhwebane recommended that the president take disciplinary action against Gordhan and recover the money.

Gordhan, Pillay and former SARS commissioner Oupa Magashula have all said they intend to challenge the ruling.

"A minister exercised what is a legislative discretion granted to him in terms of the Public Service Act. It is done not just by him but by many other ministers. [T]here are thousands of these applications that come through", said Malatji.

"The fact of the matter is that Mr Pillay was 56 years old and was entitled to retire and matter of fact is the debate became: Does he retire with a penalty or not?"

Malatji said that Gordhan consulted no less than six people over three months to come to a decision.

He said Mkhwebane had "got it wrong as a matter of fact and law" and despite having made their submissions to her, he said he didn't think she had given due regard to it.

'Dismayed but not surprised'

Freedom Under Law (FUL) said it is "dismayed but not surprised" by Mkhwebane findings against Gordhan.

"The matters canvassed in the Public Protector's report are the exact same matters as those which frame one of the most notorious episodes in the National Prosecuting Authority's history - the decision to charge and then ultimately ignominiously withdraw charges against Gordhan, Pillay and former SARS Commissioner, Oupa Magashula," FUL's CEO Nicole Fritz said in a statement on Saturday.

"This attempt to reheat a long cold dish and serve it up to the public as evidence of wrongdoing is on its own alarming." READ MORE: Freedom Under Law says Public Protector's probe of Gordhan reheating 'long cold dish'

"SARS is studying the report," it said.

Calls have intensified for Mkhwebane to be fired with the DA seeking to revive a parliamentary process to remove her from office. The Congress of the People called for Mkhwebane's head, describing her as "incompetent".

Trade union federation Cosatu said the president should set aside all Mkwebane's reports until her competency and trustworthiness has been ascertained.

The Organisation Undoing Tax Abuse also called for the Public Protector's reports to be set aside until her fitness for office has been reviewed.

#OUTA calls for @PublicProtector's reports to be set aside until her fitness for office has been reviewed. Report against #PravinGordhan requires scrutiny. Suspicious timing + why rehash charges he has already been cleared on? Also, why ignore answers he supplied on 22 May? https://t.co/VAjL8Q86ZW-- OUTA (@OUTASA) May 25, 2019

Meanwhile, the EFF urged Ramaphosa not to reappoint Gordhan to his Cabinet in light of the findings.

On Monday, the Gauteng High Court in Pretoria found Mkwebane's report on the Estina Dairy Farm Project to be unconstitutional and set it aside on the grounds that she failed in her duties to investigate and report on the controversial project.

"The failure of the public protector to execute her constitutional duties... points either to a blatant disregard to comply with her constitutional duties and obligations or a concerning lack of understanding of those duties and obligations," said Judge Ronel Tolmay in the North Gauteng High Court, setting aside the Public Protector's report into the Estina dairy matter.