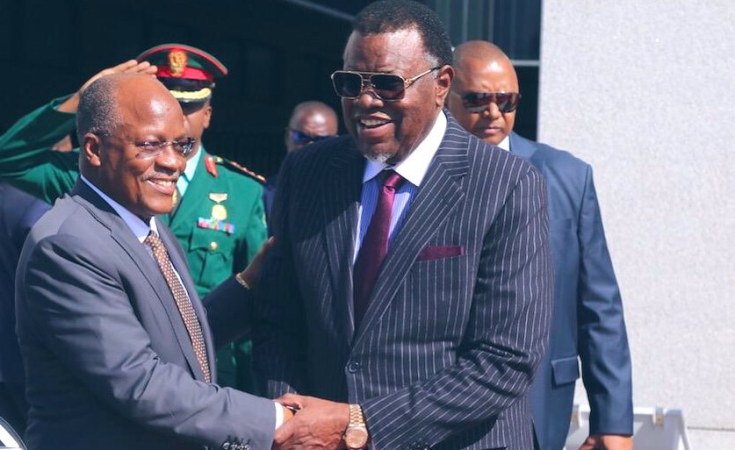 TANZANIAN president John Pombe Magufuli has demanded action from the joint permanent commission between Namibia and Tanzania to review and operationalise the cooperation agreements signed by the two countries in 1991.

Magufuli told a meeting in Windhoek yesterday that he was disappointed by the level of trade between Namibia and Tanzania, given the cooperation and history between the two countries.

The Tanzanian president is in Namibia for a two-day state visit that kicked off yesterday. The two countries have a cooperation agreement in the education sector which dates back to 1991.

The two countries have not reviewed or enhanced their bilateral relations since establishing a joint permanent commission in 1991.

The meeting would review and discuss, "in detail", the areas of cooperation, and explore new ones.

That meeting would also finalise several draft agreements between the two countries, including proposals to introduce an agreement on culture, youth and sports, and an agreement on agriculture, livestock and fisheries, amongst others.

Although the meeting was supposed to be held later this year, Magufuli ordered that it should be held earlier to finalise the proposed agreement, and start with the implementation thereof.

"They are supposed to meet in Dar es Salaam soon so that we finalise these things, otherwise we will go on talking, but nothing happens. We need to move forward, and we need to move fast. We are delayed, the progress is not good. We must change that situation. We cannot continue waiting," he stressed.

Magufuli stressed that he wants to see improved trade between Namibia and Tanzania.

The current trade levels between the two countries, he said, were very disappointing, given the level of cooperation between them.

According to the visiting president, trade between the two countries was estimated at about US$25 million last year.

"This is the area where we need to concentrate because it is very, very low, compared to the level of our bilateral relations and the immense opportunities. We, therefore, need to double our efforts to increase the level of trade between our countries, including removing all the barriers to trade and investment," he said.

He said once Swahili is introduced as an official language for the Southern African Development Community (SADC) region, it will play an important role not only in connecting the SADC region, but also other parts of the continent.

According to him, Swahili is the 10th most widely spoken language in the world. In Africa, it is spoken in 14 countries, of which six are SADC member states.

"We hope that Namibia will follow in the steps of other SADC countries which have introduced Swahili into their education systems, such as South Africa and Rwanda. Tanzania will provide Swahili teachers and other learning materials as a way to train Namibians to become Swahili teachers. I am very keen on seeing things happen," he stated.

President Hage Geingob, at the same event, emphasised the need for the governments of the two countries to increase efforts to review "all aspects which were agreed upon, and to come up with a concrete and practical plan of action to revitalise our cooperation".

He said Magufuli's visit was a good opportunity for the two countries to expand their partnership.

"Let us join our efforts and resources to improve the livelihoods of our people. We should build a partnership for growth and development, focusing on key issues such as agro-processing, the value-addition of minerals, manufacturing, and logistics," he said. 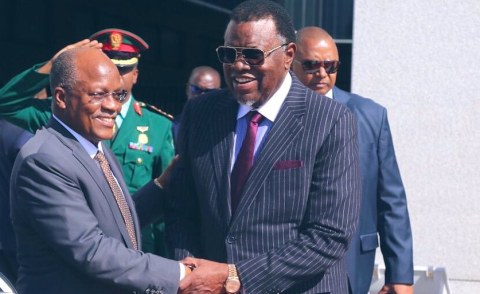 Magufuli Demands Action on Tanzania, Namibia Agreements
Tagged:
Copyright © 2019 The Namibian. All rights reserved. Distributed by AllAfrica Global Media (allAfrica.com). To contact the copyright holder directly for corrections — or for permission to republish or make other authorized use of this material, click here.