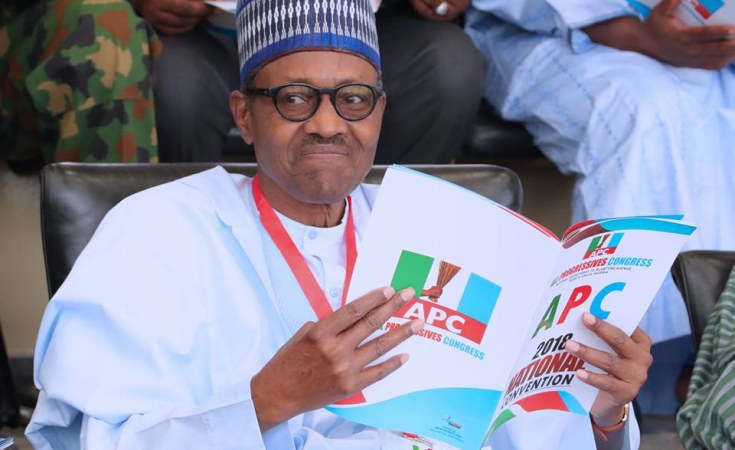 However, Daily Trust reports that some of the outgoing governors have already handed over the baton of leadership to their successors ahead of time.

President Buhari and his running mate Osinbajo of the All Progressives Congress (APC) would be sworn-in today at the Eagle Square in Abuja for a second term.

President Buhari had defeated candidates of 73 other political parties, including former Vice President Atiku Abubakar of the Peoples Democratic Party (PDP) in the February 23 election.

Twelve new governors will take the oath of office for the first time, while 17 others who won a second term in the March 9 elections would also be sworn in.

The results of the election showed that only APC and PDP produced governors out of the over 90 political parties that fielded candidates.

With last Friday's Supreme Court decision, the PDP has 15 states, while the ruling APC has 14 out of the 29 where governorship election held.

Governorship elections would be held in Kogi and Bayelsa states in November this year, Ondo and Edo in 2020; Anambra in 2021 and Osun and Ekiti in 2022.

Outgoings govs hand over ahead of time

In Lagos, the handover of power between the outgoing governor, Mr Akinwunmi Ambode and the incoming governor Babajide Sanwo-Olu would be low-keyed.

The event scheduled to hold at the Tafawa Balewa Square, Lagos may witness only the swearing-in of the new governor and his deputy, Dr Babafemi Hamzat by the State Chief Judge, Opeyemi Oke.

Ambode transmitted his handover notes and other necessary documents to Sanwo-Olu at a private meeting held at the Lagos House, Alausa, in Ikeja.

"We are excited with the conversation and thoughts we had with him. We are looking forward to the inauguration ceremony tomorrow (today)," he said.

Ambode's Chief Press Secretary, Habibu Aruna could not be reached on the plans for the handing over ceremony, as there were speculations that Ambode may not show up at the ceremony having delivered state-wide farewell broadcast.

In Imo, outgoing Governor Rochas Okorocha had vacated the Government House in Owerri in a long motorcade amidst pomp and pageantry. It was not clear if he would personally handover to incoming Governor Emeka Ihedioha.

In Bauchi State, outgoing Governor Mohammed Abdullah Abubakar was absent at the handover ceremony which took place at the Government House in Bauchi last night.

He was represented by his deputy, Architect Audu Sule Katagum, who handed over to the incoming governor, Senator Bala Abdulkadir Mohammed.

In his speech, the governor congratulated the new governor on his victory and reminded him of the challenges ahead. The incoming governor build on some of the good legacies of the outgoing administration which will help develop the state and its people.

In Ogun, the outgoing Secretary to the State Government (SSG), Taiwo Adeoluwa, handed over vital documents to the Deputy Governor-elect, Mrs. Noimot Salako-Oyedele, who represented incoming Governor Dapo Abiodun at a brief ceremony at the Governor's Office, Oke - Mosan, Abeokuta.

Daily Trust reports that the outgoing Governor, Senator Ibikunle Amosun, who was absent at the ceremony, left the Governor's Office in a motorcade before the handing over ceremony began.

Sources said Amosun would be leaving the state for lesser Hajj last night and might not be part of the ceremony scheduled to hold at MKO Abiola International Stadium, Kuto, Abeokuta.

The deputy governor-elect in her remarks vowed to review contracts and ongoing projects of the state government.

The handing over ceremony will also be low-key in Zamfara state as PDP's Matawalle takes over from Abdulaziz Yari.

The governor-elect had already approved a 79 -man transition committee headed by the outgoing Deputy Governor, Alhaji Ibrahim Wakkala Muhammad, who had parted ways with Yari long ago.

Sources within the committee told Daily Trust that the ceremony would not be an elaborate one. Yari and Matawalle however had a brief exchange yesterday as part of the handing over formalities.

The Special adviser to Yari on Social Media, Alhaji Dahiru Samaila Mafara, said he was not sure whether Governor Yari would personally attend the swearing in ceremony.

In Yobe, the chairman of the sub-committee for the inauguration of Mala Buni, Alhaji Mala Musti, said the handing over, which would take place at the government house in Damaturu, would be low-keyed.

However, the celebration in Oyo State would likely witness carnival-like events as the two prominent parties, the PDP and APC were reportedly set for a grand outing.

Special Adviser to Ajimobi on Media, Bolaji Tunji, told our correspondent that the governor was supposed to attend the inauguration of President Buhari in Abuja, and from there would proceed for lesser hajj to pray for Oyo state and the nation at large.

The inauguration of Inuwa Yahaya in Gombe would also be low-keyed, Daily Trust learnt.

Yahaya, who would take over from Ibrahim Dankwambo, would be sworn-in at the Pantami Township Stadium.

The Vice Chairman of the Inauguration Committee, Alhaji Abubakar Mu'azu Hassan, said the elaborate celebration will hold on June 12, the new democracy day.

"However, there will be dinner at the Banquet Hall of Government House in the evening," he said.

A media aide to Dankwambo said the outgoing governor would hand over the reins of leadership to incoming governor at the council chamber of the state Government House after the swearing-in ceremony.

In Rivers, Wike has planned an elaborate ceremony for his second term inauguration.

The state government on Monday held a book launch which delves into the activities of the State Government in last four years.

The book launch chaired by the former President Goodluck Jonathan was a beehive of activities as hundreds of people across the 23 Local Government Area of the state attended the event.

The Director of Publicity of Wike inauguration, Barrister Emma Okah called on the people of the State to come out en mass to attend the inauguration.

The handing over ceremony in Nasarawa State would be elaborate.

Daily Trust saw technicians, event decorators and others putting finishing touches to the Lafia City Square were the event would hold.

An aide to Tanko Al-Makura said the outgoing governor would personally attend the ceremony.

Buhari's Assets Have 'Changed After Four Years, but Not Significantly'

Nigerians Became Poorer in Buhari's First Term - the Economist
Tagged:
Copyright © 2019 Daily Trust. All rights reserved. Distributed by AllAfrica Global Media (allAfrica.com). To contact the copyright holder directly for corrections — or for permission to republish or make other authorized use of this material, click here.