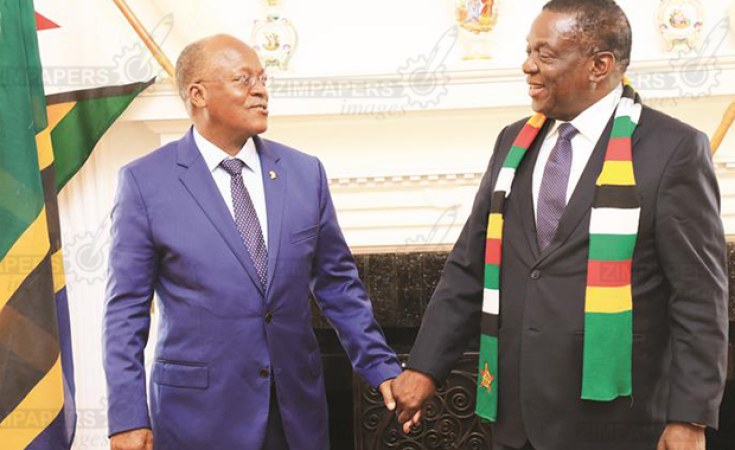 Tanzanian President John Magufuli yesterday extended his working visit in Zimbabwe as he held bilateral talks to deepen, promote and consolidate cooperation with his opposite number, President Mnangagwa. The extension, fairly a rarity in statecraft, came as the two leaders pledged to transfigure existing historical and political relations towards a stronger bilateral focus.

The bilateral discussions that were attended by Cabinet ministers from both countries and senior Government officials were aimed at exploring ways to enhance cooperation in various sectors to increase trade, which is at US$10 million.

Briefing journalists after a two-hour long meeting at State House, Dr Magufuli said it was high time Zimbabwe and Tanzania transformed their relations from political to economic cooperation.

"I really enjoyed staying here in Zimbabwe and I think that the cooperation and bilateral relations will continue. I just came here to cement it. So I can say that I am acting like a catalyst and you know the work of a catalyst, it is to speed up the reaction even if it does not take part in the chemical change," said President Magufuli who had earlier on given his brief in Swahili.

"So I can assure you this good relationship and bilateral relations between the two countries will continue to exist and we have agreed on several issues on trade, tourism, infrastructure, Swahili language, just to mention a few.

"I have seen some progress as far as development is concerned. Yesterday I was saying that the developments in Zimbabwe have improved. It is now almost 3,2 percent to 3,5 percent growth rate and it is my hope that by next year it will go up to around 5 percent. So I am wishing you well my brother. It is up to the people of Zimbabwe to give him support so that he reaches the best direction. The beginning is always a problem but I can assure you that with Emmerson you are heading in the best direction."

He said Tanzania's economy was equally doing well in terms of the inflation and growth rates.

"We are trading well and we think that due to the fact that the cooperation and relationship between Tanzania and Zimbabwe it is my hope that even trade is going to increase. Before that the trade between Tanzania and Zimbabwe was around US$10 million per year and employment opportunities were less than 2 000 people, so we think that this is supposed to be changed," he said.

Asked if he felt that his call for the removal of illegal sanctions by Western countries would be heard, Dr Magufuli said there was need for a different approach such as engagement.

"To be heard or not to be heard but I have said it. So it is up to them but I have tried my level best because Zimbabwe needs to move as far as economic development is concerned, so it cannot move with those sanctions. The time has come to decide on a different way so that instead of punishing poor people of Zimbabwe we could just use another method, maybe engagement and solving the problems together. I am sure they have heard because you are there, you will make them hear," he said.

President Mnangagwa said the economy had registered some positive growth on the back of mining, agriculture and tourism but illegal sanctions continued to weigh down industrial growth.

"Our economy has greatly been affected by sanctions, it is now 18 years. However under the current dispensation we have said sanctions or no sanctions, we must focus on developing our economy. We must use our own domestic resources to develop, modernise and industrialise our economy. The other sector like manufacturing are constrained by the fact that we have to retool.

"After 18 years of sanctions most of our factories now have obsolete equipment it is necessary that we catch up with modern practices in that sector in order for us to be competitive in the global market," said President Mnangagwa.

There were lighter moments when President Mnangagwa translated what President Magufuli had said in Swahili.

"The President is saying Tanzania during the last season had up to 16 million tonnes of grain but the consumption is about 13 million tonnes, so there is a surplus. He understood that Zimbabwe has a deficit of around 700 000 tonnes so they have a feeling that they should assist Zimbabwe since they have that surplus," said President Mnangagwa.

Previous Story
Next Story
Magufuli Okays Sale of 700,000 Tonnes of Maize to Harare

Magufuli Okays Sale of 700,000 Tonnes of Maize to Harare 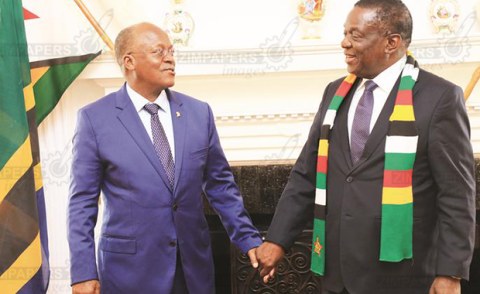 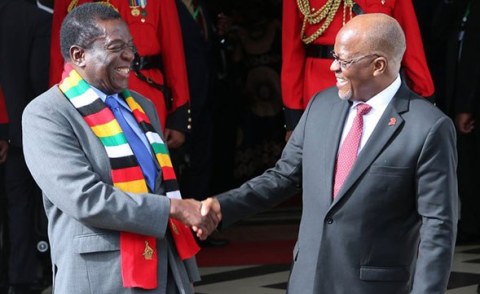 Why Zimbabwe's Mnangagwa Is In Tanzania
Tagged:
Copyright © 2019 The Herald. All rights reserved. Distributed by AllAfrica Global Media (allAfrica.com). To contact the copyright holder directly for corrections — or for permission to republish or make other authorized use of this material, click here.