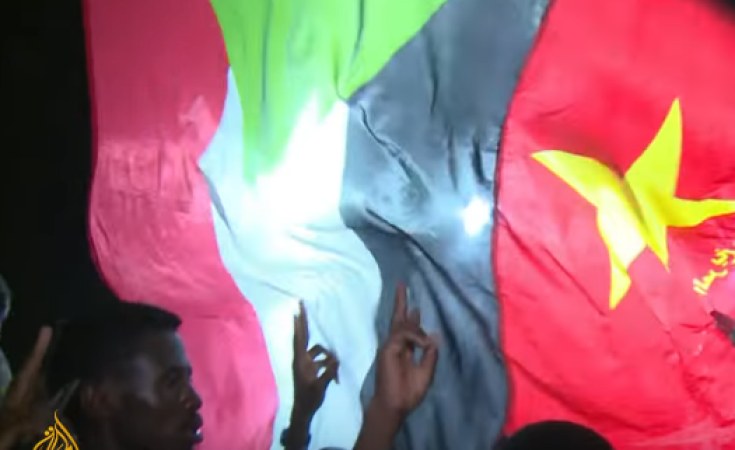 Al Jazeera English/YouTube
Protesters in Khartoum on May 30, 2019.
allAfrica.com

Sudan's military rulers say that a protest camp in the capital has become a threat to the country's national security, Al Jazeera reports.

The council has also ordered the closure of the office of the Al Jazeera Media Network in Khartoum.

Al Jazeera reports that a spokesman of the transitional military council said in a televised statement on Thursday that legal action would be taken against what it called "unruly elements" at the encampment outside the defence ministry, where protesters have been staging a sit-in for weeks.

"The protest site has become unsafe and represents a danger to the revolution and the revolutionaries and threatens the coherence of the state and its national security," said General Bahar Ahmed Bahar, head of the central region in Khartoum.

In a press release, Al Jazeera denounced the "abrupt" closure of Khartoum bureau and the banning of its reporters from reporting in the country, calling it "a complete violation of the freedom of the press".

The protest follows a two-day strike organised by demonstrators and opposition groups frustrated by a deadlock in talks on a transition to democracy.

Reuters quotes General Bhar as accusing "unruly elements" of attacking a vehicle used by the paramilitary Rapid Support Forces (RSF) and seizing it near the protest site.