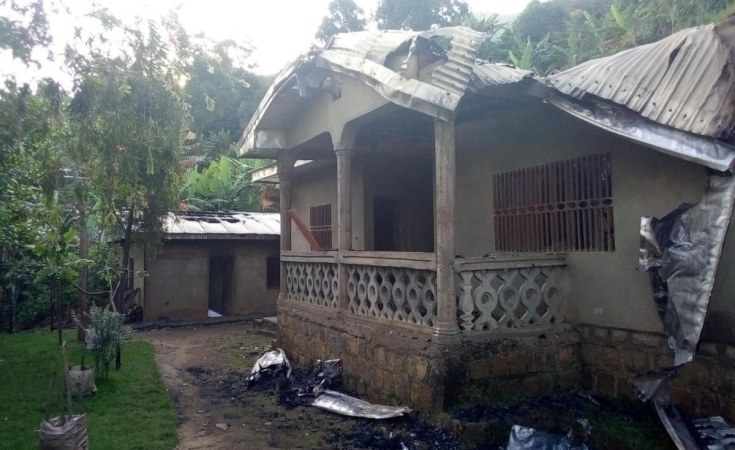 Human Rights Watch
A house burnt down by the military in Abuh village North West on the 19th of November 2018.
Voice of America (Washington, DC)
By Moki Edwin Kindzeka

Cameroon is accusing the international NGOs of exaggerating the crisis in the country's two English-speaking regions. Separatists there have been fighting the government troops since 2017, alleging years of marginalization by authorities of the mostly French-speaking country.

External relations minister Lejeune Mbella Mbella said Thursday his country has been the object of ceaseless attacks from international NGOs, rights groups and aid agencies over its handling of the separatist movement.

This week, French Foreign Minister Jean-Yves Le Drian told lawmakers in Paris that he is disturbed by the growing loss of human life in the regions.

On Wednesday, Refugees International said the Cameroonian government has refused to recognize the severity of the crisis and that international donors have not engaged with the situation in any meaningful way.

The United Nations estimates at least 1,800 people have been killed and more than 530,000 displaced since fighting broke out in the English-speaking Northwest and Southwest regions in 2017. It says about 1.3 million people are in need.

Mbella Mbella said the figures are exaggerated to give the impression Cameroon is not able to handle the situation.

He said the government, with the assistance of its international partners, has distributed humanitarian assistance including goods of basic necessity, school books, planting seeds and building material to 75,000 of the 150,000 internally displaced persons.

Mbella Mbella did not give a number for those who have died but said it was Cameroon's duty to lead peace efforts to ensure that stability and peace return to the regions.

He said the government is capable of doing that as a sovereign state without the intervention of other nations.

He said although it has been accused of committing atrocities, the Cameroon military has only been protecting its citizens from separatist fighters and defending the territorial integrity of the country. He said the military has been very professional in executing its task against what he termed barbaric fighters.

Mbella Mbella accused some rights groups of wanting to destabilize Cameroon by giving an impression the crisis is escalating and the government is not doing enough to resolve it.

One of the groups accused was Human Rights Watch.

Ilaria Allegrozzi, a central Africa researcher for HRW, was refused access to Cameroon last May, on the grounds she did not give proper information about the crisis.

She says the group should be allowed to do its work, which is essentially to promote human rights.

"We have tried to establish and open frank dialogue with the government and we will continue to do so. By enabling human rights organizations to operate without obstacles and without difficulties, Cameroon would demonstrate its willingness to allow rigorous and independent scrutiny of its efforts to adhere to international human rights law," Allegrozzi said.

Alice Nkom, a local human rights lawyer, says humanitarian needs are rising by the day because the crisis is worsening and the military option taken by President Paul Biya is not a good one.

"He is still deaf and dumb when it is about peace or dialogue. He wants to use soldiers and give them the mandate to do what they can do with guns," Nkom said.

German Govt Urged to Step Up Action on Cameroon
Tagged:
Copyright © 2019 Voice of America. All rights reserved. Distributed by AllAfrica Global Media (allAfrica.com). To contact the copyright holder directly for corrections — or for permission to republish or make other authorized use of this material, click here.