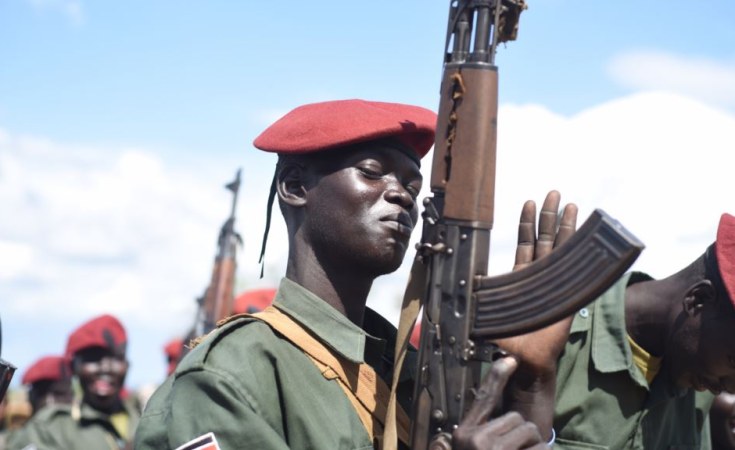 As a coalition of 15 international and regional civil society organizations, we are writing to seek your urgent support in addressing the precarious situation in South Sudan. Delays in implementation of the Revitalized Agreement on the Resolution of the Conflict in the Republic of South Sudan (R-ARCSS) and the recent six-month extension of the pre-transitional period demonstrate that sustained international political pressure from the region and the UN Security Council (UNSC) is essential to protect the lives of civilians, ensure continued momentum towards peace for the people of South Sudan, and end and remedy serious violations of human rights and international humanitarian law (IHL). To that end, we urge you to support measures in the Security Council to:

Renew the conditions laid out in Resolution 2428 (2018) to amplify the arms embargo on South Sudan and sanctions on designated South Sudanese individuals in the UNSC sanctions regime. Such a renewal of the sanctions regime would clearly demonstrate to South Sudan's leaders that there are real consequences and accountability for continuing a war characterized by gross violations of IHL and human rights. The South Sudan government's recent contract to the lobby group Gainful Solutions to reverse and block sanctions and delay and block the Hybrid Court for South Sudan, among others, demonstrates a clear lack of political will for ensuring accountability for war crimes, and underlines the need for continued pressure with sanctions.

Reiterate the need for swift and coordinated implementation and effective monitoring of the targeted sanctions regime and arms embargo, with full participation and adherence from all stakeholders in the region and international community. Sanctions are a useful tool of accountability for and deterrence against unlawful attacks on civilians, but only if they are well-targeted, robustly implemented, monitored, and supported by regional actors. The UN Panel of Experts has reported likely violations of the arms embargo, including the presence of foreign troops and possible international support to the maintenance of attack helicopters. It is imperative that more time is given to monitor the embargo and more pressure is put on neighboring countries to adhere to the reporting obligations as required by UNSC Resolution 2428 (2018).

Maintain the sexual violence listing criteria in the sanctions regime and request the Sanctions Committee to enhance implementation of accountability measures in line with evidence presented by the UN Panel of Experts in their final report, and the renewed mandate of the UN Mission in South Sudan (UNMISS).

International pressure - including, crucially, from the Security Council - has helped to lead to a reduction in violence in recent months and some momentum in the peace process. Deciding not to renew the above measures carries the real risk of jettisoning even these small positive developments and signaling to South Sudan's warring parties that they can continue to act with impunity.

The final report of the UN Panel of Experts published in April 2019 demonstrates that the peace, security, and stability of South Sudan will continue to be threatened so long as top officials on both sides commit gross violations with impunity. Both government and opposition forces have been implicated in serious violations of IHL, crimes against humanity, and war crimes, including the targeted killing of civilians, rape and other forms of sexual violence, as well as conscription of children. Such gross violations, documented by the UNMISS Human Rights Division, the UN Commission on Human Rights in South Sudan, and human rights organizations, are directly linked to the government and the opposition's ability to access arms, military training, and technical assistance. The apparent fates of Aggrey Idri and Dong Samuel at the orders of Lieutenant General Akol Koor Kuc are just two examples of blatant disregard for the right to life and the cyclical culture of impunity.

The parties to the conflict have had ample time to demonstrate a commitment to honor agreements, put a stop to atrocity crimes, and cooperate with investigations and accountability mechanisms. Instead, they have continued to commit abuses and have blocked attempts to end such violations. There must be consistent, sustained pressure from the international community to demonstrate that this will not be allowed to continue, and that the government of South Sudan bears the primary responsibility to protect its populations. Maintaining and effectively enforcing an arms embargo on the supply, sale or transfer of arms and related material, and ending the provision of military training, technical and financial assistance, is vital to stem ongoing abuses.

Your Excellencies, the Security Council's mandate is purpose-built to address the situation currently facing South Sudan. In renewing and strengthening the arms embargo and targeted sanctions in South Sudan, the Council will show it is protecting the South Sudanese people in the face of continued threats to their lives. The violence and abuses in South Sudan -- and the flow of weapons that continues to feed them -- must come to an end.

2. American Friends of the Episcopal Church of the Sudans

7. Center for Civilians in Conflict

8. Global Centre for the Responsibility to Protect

9. Global Partnership for the Prevention of Armed Conflict

12. Regional Network on Peace and Security

15. Women for Peace and Democracy Nepal

South Sudan Coffers Growing Healthily After Peace Deal
Tagged:
Copyright © 2019 Human Rights Watch. All rights reserved. Distributed by AllAfrica Global Media (allAfrica.com). To contact the copyright holder directly for corrections — or for permission to republish or make other authorized use of this material, click here.