Nigeria: How Village Imam, Abubakar, Put His Life on The Line to Save Others In Barkin Ladi Attacks 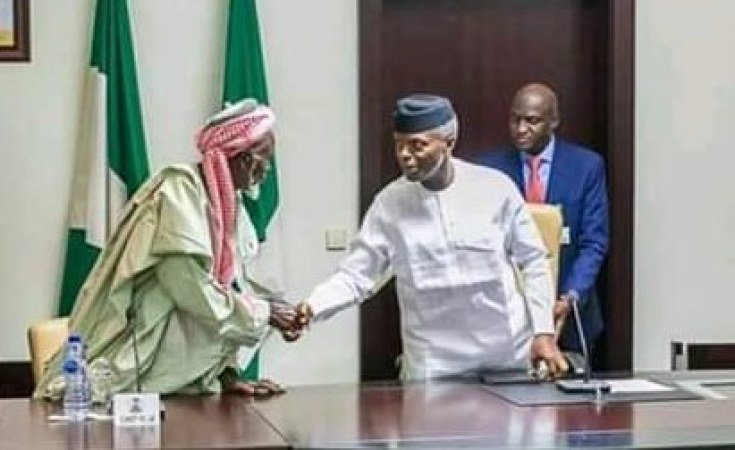 The 83-year-old Muslim Cleric, Imam Abdullahi Abubakar, who saved the lives of hundreds of persons fleeing from attacks by suspected bandits in Yelwan Gindi Akwati, Swei and Nghar villages in Barkin Ladi Local Government Area of Plateau State, has been described as a hero by Vice President Yemi Osinbajo, SAN.

Prof. Osinbajo stated this on Thursday at the Presidential Villa, Abuja, when he received Abubakar; the Village Head, Damafulul Mangai; other community leaders and a delegation which included diplomats from the US, UK and the European Union.

Abubakar, who is Hausa and the Chief Imam of a mosque in Yelwan Gindi Akwati village, in the Barkin Ladi Local Government Area of Plateau State, alongside his assistant Umar Abdullahi, who is Fulani, saved the lives of over 200 persons when suspected bandits attacked communities in the LGA.

The reported attack took place on Saturday June 23, 2018, on Yelwan Gindi Akwati, Swei and Nghar villages in Barkin Ladi Local Government Area, where scores of persons were killed by suspected bandits. Abubakar reportedly hid over 200 persons, who had fled from nearby communities, inside the mosque and in his personal house, until the attackers left. Many of those the Muslim Cleric provided shelter for were from the Berom ethnic group which are predominantly Christians.

Reports indicated that Abubakar, in defending “my guests”, insisted that the attackers would have to kill him if they refused his pleas not to attack those he was hiding. At a point, the Imam was said to be on his knees and then rolling on the floor to appease the attackers.

Describing Abubakar’s act as heroic, the Vice President noted that the Imam had done so much more to promote peace by his singular acts than most politicians could do and so deserves all the commendation and high honour.

Prof. Osinbajo urged politicians to avoid using religion and tribal sentiment to create division among people, noting that Abubakar has demonstrated to leaders that the way to resolve whatever conflict is not by violence, but a demonstration of love.

Turning to the Imam, the VP said, “I commend you for your wonderful act, Imam Abubakar. Yours is one of the most courageous acts any man can possibly do, by offering your own life, for others especially those who are not of your tribe or faith.

"This is one of the most compelling stories I have heard. The love an individual can show for others not from their own tribe or religion.”

The Vice President urged all Nigerians despite tribe and religion to eschew bitterness and embrace peace and harmonious living.

He said, “It is far easier for people to create religious tensions between Christians or Muslims through their acts or words. And in a community where people have lived together in harmony and peace for so long, it shows how much a little of such tension created, in a matter of hours, can destroy harmony and peace built over the years.”
Before the attacks, the community had reportedly lived in peace.

Continuing, Prof. Osinbajo noted that, “Most people in this country do not see the differences in tribe or religion, but it is easy to stoke religious tensions and divisions. So, one must be careful of those who want to play politics and create differences using religion and tribe. This is not just in Nigeria alone, but all over the world. No tribe or religion is superior to another.

“When people have been wronged, it is always easier for people to accept that revenge or vengeance is the right approach. But as you know, vengeance breeds bitterness and hatred, and doesn’t solve the problems created, but causes more deaths and harm."

According to the Vice President, it was wrong for anyone to kill in the name of religion, noting that Abubakar’s incredible act of courage in saving others passed messages to both Christians and Muslims, and people of different tribes and religion.

Firstly, Imam Abubakar sent a message to Christians and the Berom community “that their own lives are as valuable as his own life. This is a very powerful message.
Secondly, according to the VP, he sent a message to Muslims by keeping people of other faith safe in a mosque, which is a sacred place; “that is a strong message to Muslims on the sanctity of live, regardless of faith or tribe, and that other religions and lives are equally as important to God. The Imam did not preach this by word but by deeds of love, by putting his life on the line to make a point.

“Like President Muhammadu Buhari said, anyone who says “Allah Akbar”, and then goes to kill someone either does not know his faith or is insane. It is the same in the Christian faith. The gospel of Jesus Christ says we must first love, even our enemies and those that despitefully use us. And anyone who preaches something different is certainly not speaking from the Bible or the Gospel of Jesus Christ."

The Vice President recalled that President Buhari had said during a meeting with the Catholic Bishops that, all through his life as a public servant, he believed that people should be judged by their performance and character, and not by tribe or faith only, and also that everyone must have a right to worship God the way they chose.

The Vice President further said the Federal Government would look at further ways to improve the communities in Barkin Ladi, and others affected by ethnic/religious crisis.

“We will look at how the Plateau State government and Federal Government can help in the rehabilitation process. Government has been doing this in phases, to restore areas devastated by crisis. But we would look at ways to help further,” he said.

Abubakar, as well as his deputy, Alhaji Umar Abdullahi, were recently honoured by the US Embassy in Nigeria for the heroic deeds.

“Imam Abubakar should be celebrated everywhere in this world, and I am happy that the US Ambassador has honoured him with an award. It is well deserved.  We are very proud of what they have done. For putting their lives at risk to ensure the safety of other tribes and people of different faith," Osinbajo said.

The VP also commended the Village Head, Mangai, for being supportive of a peaceful community “where everyone of different tribes can live together in peace”, while also thanking the US Embassy for its role in promoting peace by honoring Abubakar.

In his remarks, Abubakar, who spoke through an interpreter, thanked the Vice President, noting that he didn’t want this to be publicized, but he felt that God chose him to do what he did to be used as an example. The Imam said he told the attackers at some point that they had to kill him first before harming his ‘guests’. That statement dissuaded them, he added.

“I pleaded with the attackers in the mud and rain not to harm my guests. By God’s grace, no one was hurt. God created mankind differently, but he wants us to live together in peace and harmony, and not harm each other. Such incident (the attack) is rare in my community, but I hope such does not happen in my village again,” he said.

Previous Story
Next Story
You Are a Hero, VP Hails 83-Year-Old Muslim Cleric Who Saved Christians

You Are a Hero, VP Hails 83-Year-Old Muslim Cleric Who Saved Christians 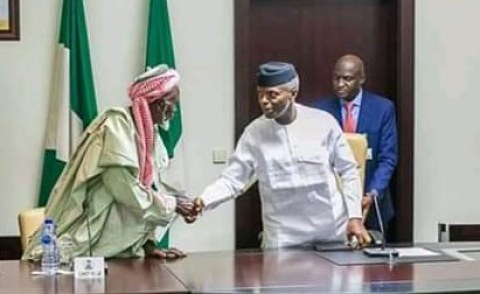 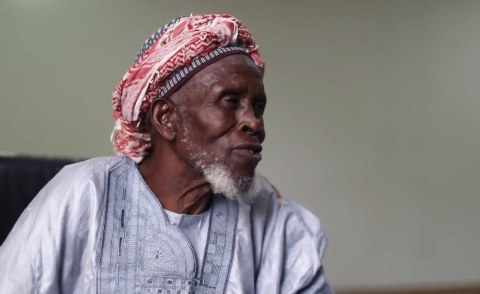 Nigerian Imam, Sudan Activist Honored With U.S. Govt Award
Tagged:
Copyright © 2019 Government of Nigeria. All rights reserved. Distributed by AllAfrica Global Media (allAfrica.com). To contact the copyright holder directly for corrections — or for permission to republish or make other authorized use of this material, click here.