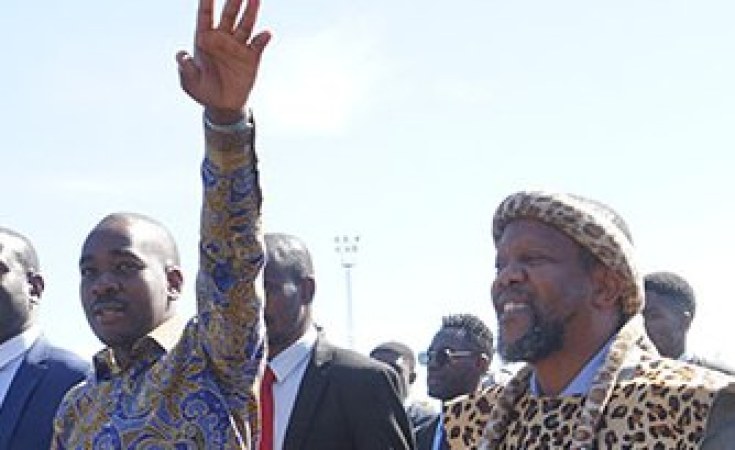 Senior Zanu PF and government officials as well as ruling party supporters, left national hero Dumiso Dabengwa's burial site in a huff after it was announced MDC leader Nelson Chamisa would be one of the speakers.

President Emmerson Mnangagwa and his two deputies Vice President Kembo Mohadi and Constantino Chiwenga were also conspicuous by their absence. However, Chiwenga is reportedly out of the country receiving medical aid.

Among those who immediately left the village was Information and Publicity Minister, Monica Mutsvangwa, Deputy Minister of Defence and War Veterans, Victor Matemadanda , Small and Medium Enterprises' Stembeniso Nyoni and Speaker of the National Assembly, Jacob Mudenda.

Principal director in Mohadi's office, Reverend Paul Damasane was the master of ceremony for the government programme, while one Gibson Sibanda handled the family side from which Chamisa and Chief Ndiweni emerged.

There were wild celebrations when Sibanda asked Chamisa to approach the podium and address the mourners who thronged Ntabazinduna village to pay their last respect to the late national hero.

Chamisa described the late Dabengwa as a humble representation of what is Zimbabwean.

Dabengwa threw his weight behind Chamisa in the run-up to the election. However, despite the MDC leader's post poll-protests the Zapu leader endorsed President Emmerson Mnangagwa's victory.

"I'm a realist and being realist, I believe that we have a Government with us today whether you like it or not. The current Zanu-PF Government is unlikely to change until 2023," Dabengwa said then. "In 2023 that is when the country will go for another harmonised election as per the country's electoral cycle."

Echoing demands made by Zapu acting president Isaac Mabuka, who called on Mnangagwa to establish an independent commission to deal with the contentious issue of conferring heroes status on deserving Zimbabweans, Chamisa suggested only those that went to war should be accorded the honour.

"Heroism is about the honour of those who liberated our country," said Chamisa adding the status should not be proscribed by one political party.

Chief Ndiweni in his speech bemoaned the deteriorating economic and political situation in the country.

"There are serious issues that we need to restore .If you ask all the war veterans here did you complete your job? Is it what you fought for? Is this is what you were trained for?

"Do you want to leave this heritage to your children? It is no to all these questions," Chief Ndiweni said.

"We do not have time. We need straight talk .All the urban areas in our countries have become car parks. Ladies and gentlemen our democracy is not right," Chief Ndiweni said.

"All of us need to speak up .We need to have a voice .We need a conversation which can put our country straight."

Chief Ndiweni had no kind words for State media which he said had little understanding of the roles of a traditional leader.