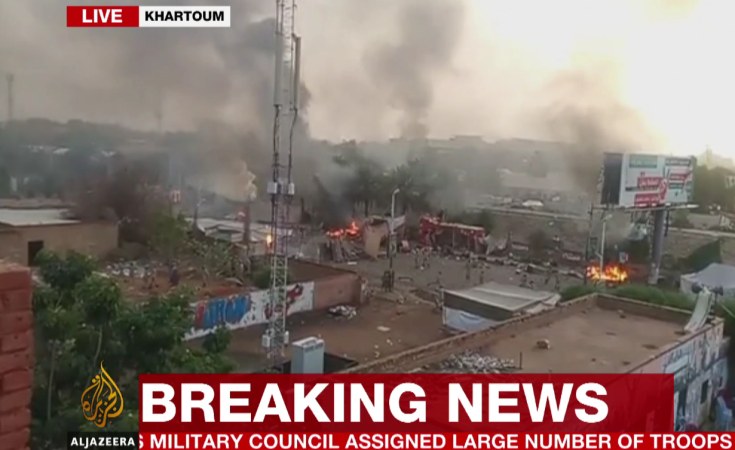 Khartoum — Members of the Sudanese Journalists Network (SJN) were prevented from carrying out a vigil in front of the Al Jazeera office in Khartoum on Sunday. The Qatar-based TV channel was banned by the Transitional Military Council (TMC) last week.

A joint security force raided the office of Al Jazeera satellite TV channel on Thursday evening. The TMC have ordered the channel closed it for an indefinite period and withdrawn its license.

Journalist Mohamed Himmad told Radio Dabanga from the sit-in in front of the general command of the Sudanese army in Khartoum that the protesters at the vigil were attacked by a group of paramilitaries of the Rapid Support Forces (RSF), led by a colonel. "They demanded that the protesters leave the military area, but the office of Al Jazeera is near the Constitutional Court, which is not a military area."

Himmad pointed out that the protesters had verbal arguments with the RSF. The vigil was held later at the tent of the SJN at the sit-in.

Al Jazeera tweeted on Thursday that the media credentials of its journalists were revoked and their tools confiscated.

Sudanese journalists strongly condemned the closure of Al Jazeera channel, on orders of the TMC.

In a statement on Friday, the Sudanese Journalists Network called the shut-down carried out by a mixed team of Military Intelligence, the Intelligence and Security Service, and External Information Secretariat agents on Thursday evening as "a new setback to public liberties and the gains of the revolution".

The Committee for the Restoration of the Sudanese Journalists Union described the closure of Al Jazeera channel as "illegal and a violation of international conventions on freedom of information and expression".

Sudan Military Council Calls for Elections Within Nine Months
Tagged:
Copyright © 2019 Radio Dabanga. All rights reserved. Distributed by AllAfrica Global Media (allAfrica.com). To contact the copyright holder directly for corrections — or for permission to republish or make other authorized use of this material, click here.