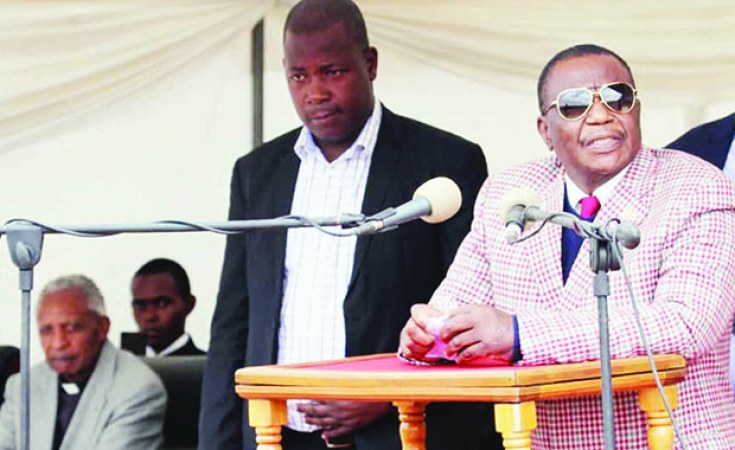 VICE President Constantino Chiwenga will only return to work once his health has improved, presidential spokesperson George Charamba said Monday.

Chiwenga has not been seen in public for over a month with an undisclosed ailment. The former Commander Zimbabwe Defence Forces has been unwell since he masterminded the coup that toppled former President Robert Mugabe in November 2017 and elevated Emmerson Mnangagwa to President.

Charamba said it is not a secret that Chiwenga is unwell.

"We have never made a secret of it. The Vice President has not been feeling well and must be allowed to recover. We want his health to rally back before he can report for work. We really have been upfront about this," said Charamba.

The presidential spokesperson would not say whether Chiwenga was in the country or not but recent media reports suggested the Vice President had been airlifted to India for specialist treatment.

"As you may recall, the last time the VP was in India for medical attention, so this time, he was due for review," Charamba was quoted as having said.

"As far as we know, he went for a routine check-up which was scheduled. I don't know what you mean when you say he was unwell when he left. All I know is that it was time for a medical check-up."

Insiders however claimed Chiwenga late last week had checked into a local private hospital "for a few hours" suggesting he might have slipped back into the country.

The Vice President's wife, Mary whose health seemed to have taken a hit after she was injured by shrapnel during the White City bombing incident a year ago, is also believed to be in India for treatment.

Chiwenga has already been to the Asian country twice this year, after he made a similar trip in February for what is believed to have been a check-up related to "oesophageal surgical procedure". He had reportedly complained of a "dry throat."

Reports claim the Vice President has in recent months had difficulties eating and this was blamed for his weight loss.

Early February this year, Chiwenga was airlifted to South Africa for emergency care, after his health deteriorated.

On his return, he tried to play down rumours of his ailment despite reports he had collapsed during a Zanu PF politburo meeting.

His apparently rushed appearance at a Cabinet meeting and a stage managed interview with State television triggered public debate and within hours the Vice President was on his way to India.

In October last year, the VP again sought emergency treatment in South Africa and at the time, Charamba said he was suffering from exhaustion and injuries from the war of liberation.

NewZimbabwe.com also heard, Chiwenga among other official engagements in the past week had been billed to represent Mnangagwa at the inauguration of Malawi's President Peter Mutharika but he cancelled. The Vice President also stood down from a planned trip to China.

Mugabe-Era Minister Jonathan Moyo Denies Hand in Atrocities
Tagged:
Copyright © 2019 New Zimbabwe. All rights reserved. Distributed by AllAfrica Global Media (allAfrica.com). To contact the copyright holder directly for corrections — or for permission to republish or make other authorized use of this material, click here.