Cameroon: Sonara Fire Incident - Investigation On Course to Uncover Cause 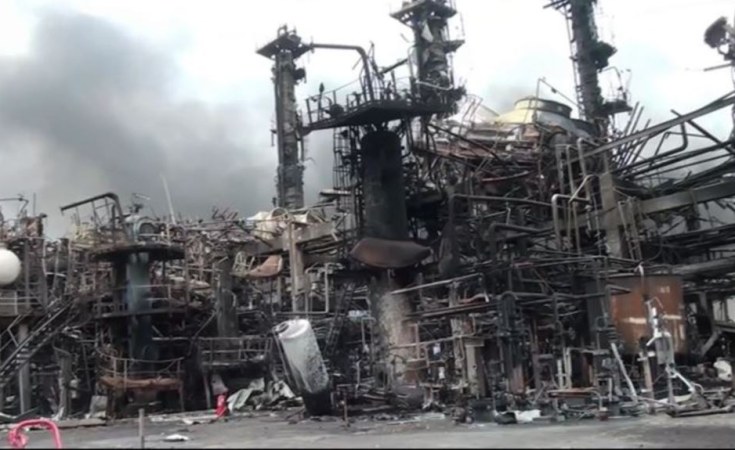 VOA/M. Kindzeka
The remains of a Cameroon refinery in Limbe are seen after an explosion shook the facility over the weekend, June 2, 2019.
Cameroon Tribune (Yaoundé)

The incident of 31 May breaking 1 June generated trembling effects in neighbourhoods and government is protecting fuel supply in the country.

Afire incident has occurred in part of Cameroon's lone oil National Refining Company (SONARA), which is based in the coastal area of Limbe, headquarters of Fako Division in the South West Region. No human life was reportedly lost. The incident triggered the movement of the Government Minister of Water Resources and Energy, Gaston Eloundou Essomba, to head for SONARA-base in Limbe in the morning of 1 June, 2019. Minister Eloundou Essomba, accompanied by the Secretary General at the South West Governor's office, Dr. Mohamadou, was informed that an explosion incident happened at about 9.55pm in the night of 31 May breaking 1st June, 2019, at the production unit of SONARA.

Heavy material damages were still fresh and visible to visiting authorities in the morning of 1 June, 2019. The affected zone was still emitting smoke into the sky. On-the-spot sources suggested that the damages observed were apparently caused by fire, which originated from a deafening explosion. The trembling effects reached the offices especially in the administrative block including cracks on the walls, broken windowpanes with debris littered on the floors of many rooms. Patches of the ceiling also came down, all of these suggesting major repair-works in the days ahead to enable a renewed conducive working environment.

Expert sources hinted that the incident began with an explosion generating fire around the production unit particularly in the zone of distillation (fractionnement). Although Minister Eloundou Essomba did not speak to the press in Limbe, expert sources suggested an accidental cause of the explosion leading to the fire. Sources say investigation was on course to determine the exact and detailed causes of the incident. Authorities explained that the fire had been brought under control with a Douala-based fire fighting brigade having lent a masterly hand to quench the inferno.

The local authorities were working to ensure that the incident did not extend any negative impact to the neighbouring population and especially that fuel supply was not affected by the incident. SONARA saw the day of light in 1973 by a presidential decree, incorporated in 1976 and inaugurated on 16 May, 1981. Its chief objective is to treat crude oil and supply refined petroleum products like butane, kerosene, gasoline, jet fuel, gas oil, and fuel oil to the national market. Its staff averages 700. Its present capital rose to CFA 32.540.227.500 billion. Of recent, SONARA has embarked on a laudable extension and renovation which was still expected to yield fruits when the fire incident happened

Fire Has Been Reported At the Cameroon Oil Refinery-Sonara (Limbe-South West Region) After an Explosion.

Crisis in Anglophone Cameroon Worsening - UN
Tagged:
Copyright © 2019 Cameroon Tribune. All rights reserved. Distributed by AllAfrica Global Media (allAfrica.com). To contact the copyright holder directly for corrections — or for permission to republish or make other authorized use of this material, click here.