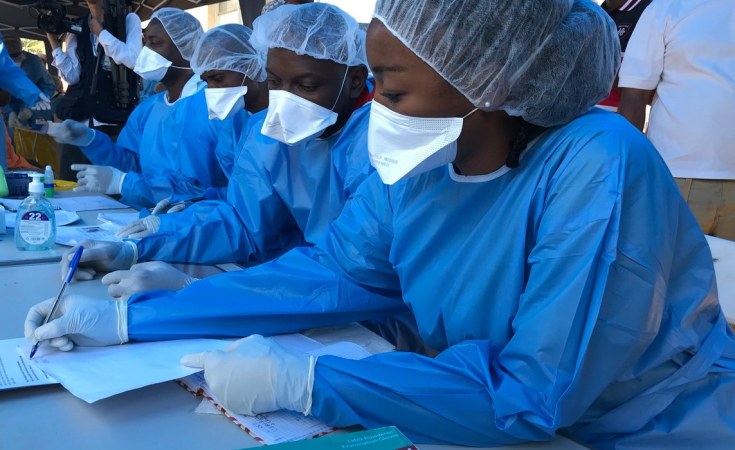 World Health Organization
Health workers in DRC are working round the clock to contain the Ebola outbreak.
Deutsche Welle (Bonn)

The daily number of new Ebola cases has tripled in recent months, according to aid organizations. Local distrust and armed groups have hampered a response to the world's second-largest Ebola epidemic.

An escalating Ebola epidemic in conflict-wracked eastern DR Congo has surpassed the 2,000 cases mark, two-thirds of which have been fatal, according to government figures.

Since August last year, there have been 2,008 confirmed and probable cases with a death toll of 1,346, the Democratic Republic of Congo health ministry said late Monday.

The world's second-largest Ebola outbreak began in North Kivu province and then spread into Ituri province, although it has not yet spread to neighboring Rwanda and Uganda.

Response efforts have been hampered by distrustful communities and a plethora of armed groups regularly threatening and attacking health workers and treatment centers.

Without access to communities, health workers struggle to vaccinate those at risk and treat those infected or trace contacts to halt the spread of the highly contagious hemorrhagic fever.

Decades of conflict in the eastern Congo has made local communities fearful of the army and even UN peacekeepers accompanying health workers.

Some locals don't believe Ebola is a disease and have hidden cases from health workers, meaning that the true number of infections and deaths may be higher than reported, the International Rescue Committee said.

"As violence and insecurity continue to hamper daily operations and mistrust prevents people from seeking care, these numbers are likely an underestimate and not a realistic picture of the number of cases out there," the aid organization said in a statement.

The International Federation of Red Cross and Red Crescent Societies (IFRC) said that in recent weeks there has a significant increase of between 15-20 new cases per day.

"This escalation is at least in part due to the precarious security situation in the affected area," it said in a statement. "IFRC is concerned that partners limit their use of security or military support as much as possible. Increasing armed protection for Ebola responders may aggravate the tensions that already exist between communities and responders."

On a positive note, more than 129,000 people, mostly health workers, have received an experimental but effective Ebola vaccine.

An Ebola outbreak that started in December 2013 in West Africa killed more than 11,300 people by 2016 before being eliminated.

Boy, Grandmother Die As Ebola Reaches Uganda - Local Source
Tagged:
Copyright © 2019 Deutsche Welle. All rights reserved. Distributed by AllAfrica Global Media (allAfrica.com). To contact the copyright holder directly for corrections — or for permission to republish or make other authorized use of this material, click here.

Here are The Ideal African Countries to Give Birth In
Mining