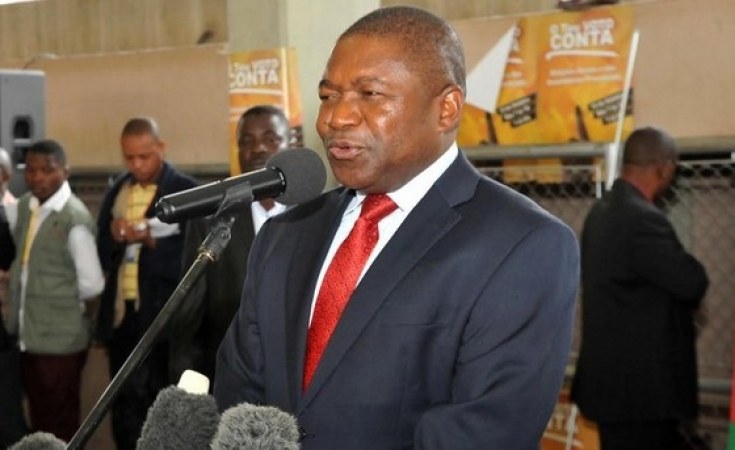 Maputo — Mozambique's ruling Frelimo Party on Thursday submitted the nomination papers for its candidate in the 15 October presidential election, Filipe Nyusi, who is running for a second term of office.

The party's election agent, Veronica Macamo, deposited all the necessary documentation with the Constitutional Council, the country's highest body in matters of constitutional and electoral law. Among the Council's tasks is checking the validity of the nomination papers of all presidential candidates.

Nyusi, who witnessed the brief ceremony, said Mozambicans should regard the elections as a festive occasion "because Frelimo thinks of the future. At our 11th Congress (in 2017) we knew what we will have to do in the next five years, and on whom we should rely. It was then that I accepted this mission from my Party. We have been preparing for this occasion".

Nyusi promised that, in the event of winning the election, he would remain committed to building the welfare of Mozambique and its people. "We have an undertaking, a responsibility to make this country grow", he said. "We want to prioritise the development of human capital, in an integrated manner, so that through our people we can advance Mozambique".

He also stressed that his priorities will include job creation, productivity and making Mozambican products competitive. Nyusi also pledged to continue the fight against corruption, and all other evils that hinder good governance.

All candidates for the presidency must submit evidence that they are Mozambican citizens over the age of 35, are registered voters, and have a clean criminal record. They must provide a coloured photograph, a copy of their election symbol, and a declaration that they accept nomination and are eligible.

But the most difficult requirement is that any presidential candidate must present a list of at least 10,000 (but no more then 20,000) supporters, all of whom must sign a form with the portrait of the candidate. Each signature must be recognised by a public notary.

Only well organised political parties can collect this number of signatures. In the last two presidential elections (2009 and 2014), only the candidates of Frelimo, the former rebel movement Renamo, and the Mozambique Democratic Movement (MDM) could provide 10,000 valid signatures.

Several minor parties attempted to forge signatures, or simply copied the names of voters off the electoral registers, and these clumsy frauds were rejected by the Constitutional Council.

Frelimo was the first party to submit its candidate's nomination papers. The Constitutional Council will accept nominations up until 15.30 on 16 June.

Meanwhile, the National Elections Commission (CNE) is continuing to accept declarations of intent from political parties who wish to stand candidates in the general elections. So far 10 parties have registered with the CNE, including Frelimo and the MDM.

Of the others, four ran in the 2014 parliamentary election and received a derisory number of votes. The Party of Union for Reconciliation (PUR) received 0.2 per cent of the vote and the Party for Freedom and Democracy (PLD) and the Patriotic Movement for Democracy (MPD) each received 0.1 per cent. The People's Party for the Progress of Mozambique (PPPM) received so few votes that its percentage rounded down to 0.0 per cent.

The other four parties are all new. Perhaps the most interesting is PODEMOS (Party of Optimists for the Development of Mozambique), since it was founded by people close to Samora Machel Junior, son of the country's first president, Samora Machel, and to his failed attempt to run for Mayor of Maputo last year.

Mozambique's Opposition Accused of Ordering Summary Executions
Tagged:
Copyright © 2019 Agencia de Informacao de Mocambique. All rights reserved. Distributed by AllAfrica Global Media (allAfrica.com). To contact the copyright holder directly for corrections — or for permission to republish or make other authorized use of this material, click here.