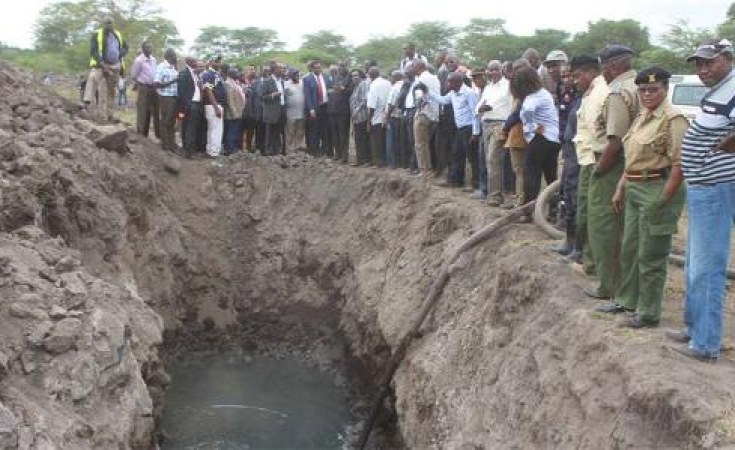 Daily Nation
A team led by Petroleum and Mining CS John Munyes during a visit to the Kiboko oil spill site in Makueni County on June 3.
The Nation (Nairobi)
By Pius Maundu

A tender row on a system to detect leakages on the new oil pipeline has occasioned heavy losses to oil marketing firms amid uncertainty over the exact quantity of fuel lost.

Kenya Pipeline Company managing director Hudson Andambi says cancellation of an original tender did them in.

"The contract for the supply and installation of Supervisory Control and Data Acquisition (SCADA) and Leak Detection System (LDS) systems was awarded on June 28, 2016 but was cancelled on August 28 the same year to allow for a change of the scope of works for the system to function as intended," he said.

"This cancellation was challenged in court by the winning bidder Siemens Ltd, although the contract had not been signed. As a result, the SCADA and LDS systems were never installed," Mr Andambi added.

This means KPC cannot tell for sure when the Kiboko leakage in Makueni started, raising fears that millions of litres of fuel could have been lost in the spillage.

The fuel was spilled into a wetland following a puncture on a section of the new Nairobi-Mombasa oil pipeline. KPC discovered the leak on March 30 and sealed it.

It is not clear for how long the new pipeline, which was installed by Lebanese contractor Zakhem International Construction Ltd, had been leaking before it was detected barely a year after it was commissioned.

"We suspect that the punctured spot had been weakened by a rock dropped by an excavator during the laying of the pipeline," said Mr Andambi, citing preliminary results of a study by the state corporation.

The pipeline, which cost taxpayers Sh51 billion to install, transports a million litres per hour, according to the chairman of the KPC board, Mr John Ngumi.

"We are yet to conduct a reconciliation between the products recovered at the site and the balance of the actual products volume after separation from water at PS10 terminal at KPC's headquarters. The result will further be reconciled against the original batch of products that was dispatched from Mombasa. We shall share the final report on the loss as the oil marketing companies who own the products are also interested parties," said Mr Andambi in a letter seen by the Sunday Nation.

He was responding to Makueni Senator Mutula Kilonzo Junior who had asked for a statement on the spillage that KPC has said was an accident.

The pipeline was touted as the panacea to leakages that dogged the old line.

The leaders implored KPC to move with speed and provide the affected community with clean water since the Water Resources Authority has already declared water from the river unsafe for drinking.

Kenyan Police, Cartels Blamed For Fuel Theft
Tagged:
Copyright © 2019 The Nation. All rights reserved. Distributed by AllAfrica Global Media (allAfrica.com). To contact the copyright holder directly for corrections — or for permission to republish or make other authorized use of this material, click here.