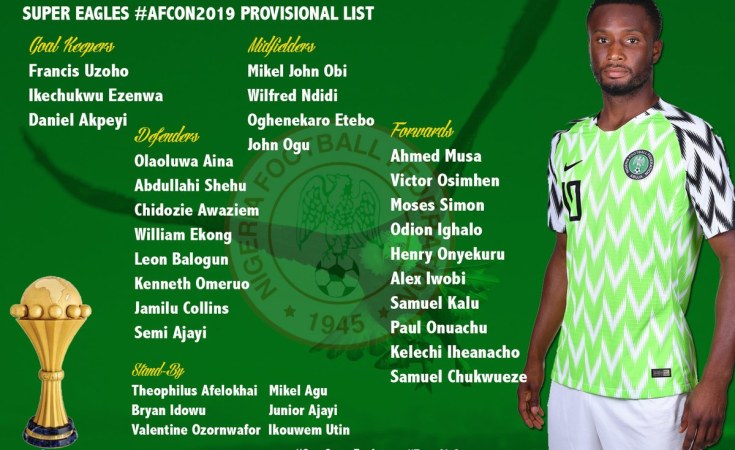 Three time African champions, the Super Eagles of Nigeria yesterday landed in Ismailia, 12 days ahead of the kick-off of the 2019 Africa Cup of Nations to be staged in Egypt.

The Super Eagles left the shores of Nigeria few hours after the Technical Adviser of the team, Gernot Rohr released names of the 23 players who will prosecute the championship for Nigeria.

The list didn't spring any surprises as suspects, Leicester City's Kelechi Iheanacho and Rotherham United midfielder Oluwasemilogo Ajayi were the players dropped from the 25 Eagles in Asaba camp.

Apart from Mikel Obi, Ahmed Musa and Kenneth Omeruo, the rest of the players will be making their AFCON debut in Egypt.

It will be recalled that after winning their third AFCON title in South Africa in 2013, the Super Eagles missed the 2015 and 2017 editions in Equatorial Guinea and Gabon.

Super Eagles and their full complement of technical and administrative officials, alongside their Zimbabwean counterparts with whom they played a 0-0 draw in a friendly on Saturday, flew together to Ismailia aboard a chartered MAX Air flight from Asaba.

On Sunday, 16th June, the Eagles will file out against Senegal's Lions of Teranga (Africa's number one -ranked team) in their final pre-AFCON friendly, in Ismailia.

Who's Hitting the Pitch for AFCON 2019
Tagged:
Copyright © 2019 Daily Trust. All rights reserved. Distributed by AllAfrica Global Media (allAfrica.com). To contact the copyright holder directly for corrections — or for permission to republish or make other authorized use of this material, click here.