Uganda: What You Need to Know About Ebola Virus 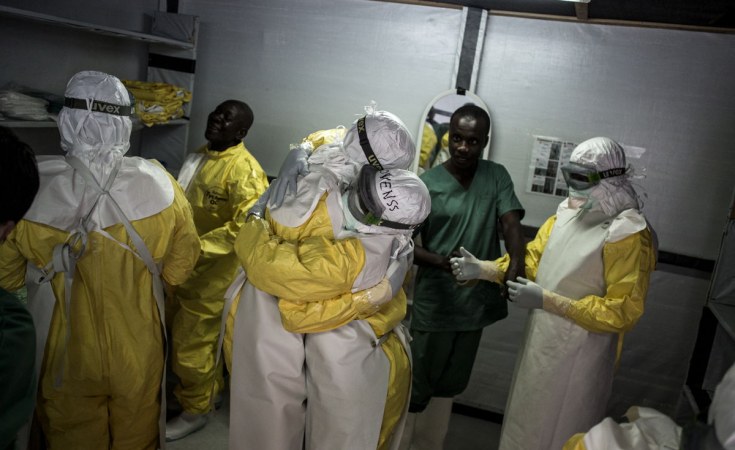 John Wessels
Health workers embrace whilst putting on their personal protective equipment(PPE) before heading into the red zone at a newly build MSF supported ebola treatment centre(ETC) in Bunia.
The Monitor (Kampala)

Uganda has once again found herself having to deal with Ebola after the ministry of health confirmed that three people who crossed from DR Congo into the country had been tested and found to have the virus. Of the three, two have passed on.

Although the country has in the past been hit by the deadly disease and lost many lives, lessons have been learnt and the country is in a much better position to deal with Ebola.

Here are some of the stories we have done over the last few years, that show how the government and ministry of health in particular have worked to ensure that the disease does not become a crisis, including vaccinating health workers, creating faster testing methods and creating efficient alert systems.

Key things that you need to know about Ebola virus

What is Ebola virus disease?

Ebola virus disease is a severe, often fatal illness, with a death rate of up to 90% caused by Ebola virus.

How do people become infected with the Ebola virus?

People become infected with Ebola virus mainly through contact with the body fluids of infected humans. Most cases are caused by human to human transmission which occurs when blood or other bodily fluids or secretions (stool, urine, saliva, vomit, semen) of infected people enters a healthy person's body through broken skin or mucous membranes.

Infection can also occur if the broken skin or the mucous membranes of a healthy person comes into contact with items or environments contaminated with bodily fluids from an infected person. These may include soiled clothing, bed linen, gloves, protective equipment and medical waste such as used hypodermic syringes.

Who is most at risk?

During an outbreak, those at higher risk of infection are:

- Family members or others in close contact with infected people;

- Mourners who have direct contact with bodies during burial rituals.

Can Ebola be transmitted sexually?

Sexual transmission of the Ebola virus, from males to females, is a strong possibility, therefore, safe sexual practices should be ensured or abstain all together until the semen has twice tested negative. Survivors should be provided with condoms. Good hand and personal hygiene should also be observed.

What are the typical signs and symptoms of Ebola virus infection?

experienced at the beginning of the disease ('the dry phase'). As the disease progresses, people commonly develop vomiting and diarrhoea ('the wet phase'), rash, impaired kidney and liver function, and in some cases, both internal and external bleeding.

How long does it take for people to develop symptoms after being infected?

The incubation period, or the time interval from infection to onset of symptoms, is from 2 to 21 days. People are not contagious until they develop symptoms. Ebola virus disease infections can only be confirmed through laboratory testing.

When should someone seek medical care?

A person with Ebola-like symptoms (fever, headache, muscle aches, headache, vomiting, diarrhea) who has been in contact with living or dead people suspected to have had Ebola or has travelled to an area known to have cases of Ebola virus disease should seek medical care immediately.

Is there any treatment for Ebola?

Can people with Ebola be cared for at home?

If a person dies at home and is suspected of having died from Ebola virus disease, family and community members should refrain from handling or preparing the body for burial. The local health authorities should be contacted immediately and asked to send a dead body management team.

Can Ebola be prevented?

Is there an Ebola vaccine?

The investigational vaccine being used in DRC and by health and frontline workers in Uganda has so far been effective in protecting people from developing the disease, and has helped those who do develop the disease to have a better chance of survival.

People who have been in contact with someone with the disease are offered vaccine and asked to monitor their health for 21 days to ensure they do not become ill as well.

Second Ebola Death in Uganda, As Virus Spreads From DRC

Govt Denies Reports of Ebola Case in Nigeria
Tagged:
Copyright © 2019 The Monitor. All rights reserved. Distributed by AllAfrica Global Media (allAfrica.com). To contact the copyright holder directly for corrections — or for permission to republish or make other authorized use of this material, click here.