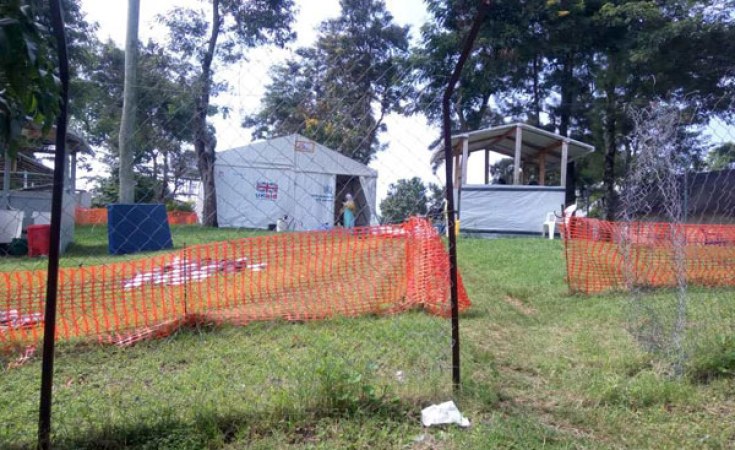 Joel Kaguta/NTV Uganda
The isolation centre set up in Bwera, Kasese District where the five-year-old boy who tested positive for Ebola died from.
Vanguard (Lagos)
By Emmanuel Okogba

A grandmother in Uganda has died from Ebola, health officials said Thursday, the second fatality in the country since a major outbreak in Democratic Republic of Congo crossed the border.

The patients were from a family of six, including four children, that travelled to Congo to care for a relative and later attended his burial after he died of Ebola.

Upon returning to Uganda two brothers -- aged five and three -- and the 50-year-old grandmother tested positive for the virus, and the family was quarantined in Bwera, a border town in the country's west.

The older boy died Tuesday -- the first Ebola fatality in Uganda since the start of the Congo outbreak that has seen more than 2,000 cases recorded, around two-thirds of which have been fatal.

"The deceased has been confirmed as the grandmother of the five-year-old boy who died. Both victims had attended the burial of an Ebola patient in Congo, but returned to Uganda," the official told AFP on condition of anonymity.

The official said arrangements were being made to bury the woman in Kasese, the western district bordering Congo where her grandson was laid to rest Wednesday.

About 25,000 people cross the district's main border crossing of Mpwonde at a daily basis, according to the DRC health ministry.

The World Health Organization also confirmed the woman had succumbed to the haemorrhagic virus.

WHO said 27 others in contact with the family had been placed under close monitoring.

Uganda's health ministry said frontline health workers were due to be vaccinated Friday with a new drug designed to protect them against the virus.

East Africa has been on high alert since the outbreak was declared in the eastern DRC provinces of North Kivu and Ituri.

WHO said 12 members of the family that attended the burial in Congo were placed in isolation in the DRC, but six "escaped and crossed over to Uganda" on June 9.

But the next day, the five-year-old was checked into hospital in Bwera vomiting blood. Tests confirmed he had Ebola and the family placed in an isolation ward.

According to the WHO, Uganda has vaccinated nearly 4,700 health workers in 165 facilities, as it seeks to contain the virus in the country's west.

Uganda has experienced several outbreaks in the past, most recently in 2012, while in 2000 more than 200 people died in an outbreak in the north of the country.

South Sudan has also declared a state of alert and vaccinated health workers.

WHO will hold an emergency meeting Friday to determine whether to declare the outbreak "a public health emergency of international concern," a major shift in mobilisation against the disease.

The emergency committee had in October and again in April held off doing this, partly because the virus remained contained in one part of DRC.

The DRC has struggled to contain the outbreak, the tenth in the country since the disease was identified in 1976.

Efforts have been hampered both by militia attacks on treatment centres and by the hostility of some local people to the medical teams. Five workers have been killed, according to an AFP tally.

Uganda to Repatriate Ebola Patients Back to DRC

WHO Clears Uganda to Import Trial Ebola Drugs
Tagged:
Copyright © 2019 Vanguard. All rights reserved. Distributed by AllAfrica Global Media (allAfrica.com). To contact the copyright holder directly for corrections — or for permission to republish or make other authorized use of this material, click here.