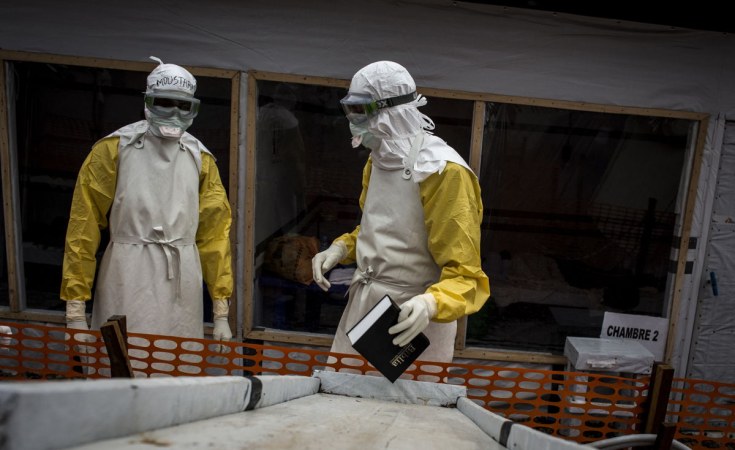 The WHO has not declared the current outbreak an international emergency. But neighboring countries considered at risk have upped their preventative measures after the virus spread to Uganda earlier this week.

The World Health Organization (WHO) stopped short of declaring the current Ebola outbreak in the Democratic Republic of Congo an international emergency following a meeting on Friday night. The decision came after the confirmation of the spread of the virus to Uganda, where three new cases were discovered earlier this week.

However, the panel of 13 independent medical experts on the WHO's Emergency Committee stressed that the outbreak remains an "extraordinary event" in the region and advised neighboring "at risk" countries to improve their preventative measures.

"This is not a global emergency, it is a severe emergency and it may affect neighboring countries," the panel's acting chair, Dr. Preban Aavitsland, told reporters at the agency's Geneva headquarters.

The current Ebola epidemic is the second-worst in history after the 2014-16 West African outbreak. The first cases of the current outbreak were reported in eastern DR Congo in August 2018, with the number of confirmed cases currently at 2,108, including 1,411 deaths.

The virus's spread to Uganda sparked fears that controlling the spread had become increasingly difficult despite the presence of health workers and a ring vaccination strategy. All three cases in Uganda were recorded in the same family who had crossed the border from DR Congo.

Concerns over economic and political impact

A number of medical observers had earlier predicted that the WHO would declare an official emergency, as it typically leads to an increase in funding, resources and political attention. WHO says at least $54 million (€48 million) is needed to stop the outbreak. Prominent public health law professor Lawrence Gostin took to Twitter to express his concern over the WHO's decision.

However, Aavitsland said declaring a global health emergency could potentially lead to severe restrictions on travel and trade in the region, significantly harming the DR Congo's already-struggling economy in the process.

"It is the view of the Committee that there is really nothing to gain by declaring a PHEIC (Public Health Emergency of International Concern), but there is potentially a lot to lose," he said.

Mathias Kamp, the Uganda representative of the Konrad-Adenauer-Stiftung (KAS), believes the decision was also made following consideration of Uganda's overall preparedness to deal with the virus.

"From a medical perspective I think it reflects the trust of the WHO in the authorities in Uganda," he said. "I think there is a strong conviction that Uganda can handle it."

Uganda has experienced five outbreaks of Ebola since 2000 and is widely regarded today as a leader in prevention and treatment measures due to its past successes in stopping the spread of the virus. Uganda's Minister of Health, Dr. Ruth Jane Aceng has asked the population to remain on alert and to observe a no-handshaking policy until the current outbreak is under control.

While conspiracy theories about Ebola remain rife in DR Congo, fueled by rebel attacks on health workers, Uganda's previous experience with the virus combined with a mass education campaign is likely to deter the spread of misinformation.

"The Ugandan authorities and their international partners have gone out of their way to really make sure that people are informed," Kamp told DW. "There have been massive campaigns, health workers have been going from door-to-door in neighboring areas including where they [discovered the most recent cases]."

But despite optimism from authorities, some Ugandans feel uneasy following the news of the most recent cases and believe authorities need to do more to educate citizens about the virus.

"The government has not done enough to sensitize people about Ebola," Kampala resident Sharif Lubogo told DW. "I think the acknowledgement [of the virus] should have started in rural areas."

Another Kampala resident, Isaish Mbuga, is worried that people will panic if they suspect they may be infected.

"You know when people have the symptoms they want to hide and then they mix with the greater population which spreads the disease to wider areas," he told DW.

Ugandan authorities have identified 98 individuals who may have been exposed to the virus, 10 of whom are considered "high risk." The group will be given an experimental vaccine over the weekend.

Medical workers at the frontline of Uganda's efforts to contain Ebola have complained of inadequate support, claiming that millions of dollars spent on preparation to tackle the virus have not been properly spent.

"People know that the Ugandan authorities aren't the most efficient and have issues of corruption and so on," says Kamp. "So people are now waiting to see if Uganda's preparedness is as good as most observers have been saying... If the response mechanisms appear not to be as effective as anticipated the mood could change dramatically."

The spread of the Ebola virus into Uganda has also prompted authorities in South Sudan to tighten their surveillance along its border with DR Congo.

Dr Richard Lako, South Sudan's Incident Manager at the Ministry for Health, said a new $12 million plan would be put in place to ensure the country could respond swiftly in case Ebola crosses the border.

"The confirmed cases in Uganda are a sobering reminder that the Ebola virus has no respect for borders," he told reporters during a press conference in Juba on Friday. "We have to take urgent steps to further protect the people and residents in South Sudan and make sure we respond quickly."

Rwanda and Burundi have also increased their preparedness measures in recent days, with both countries intensifying their border surveillance and encouraging the public to remain vigilant towards possible symptoms.

James Shimanyula contributed to this article.

WHO Emergency Panel Meets On Ebola After Uganda Deaths

Govt Denies Reports of Ebola Case in Nigeria
Tagged:
Copyright © 2019 Deutsche Welle. All rights reserved. Distributed by AllAfrica Global Media (allAfrica.com). To contact the copyright holder directly for corrections — or for permission to republish or make other authorized use of this material, click here.