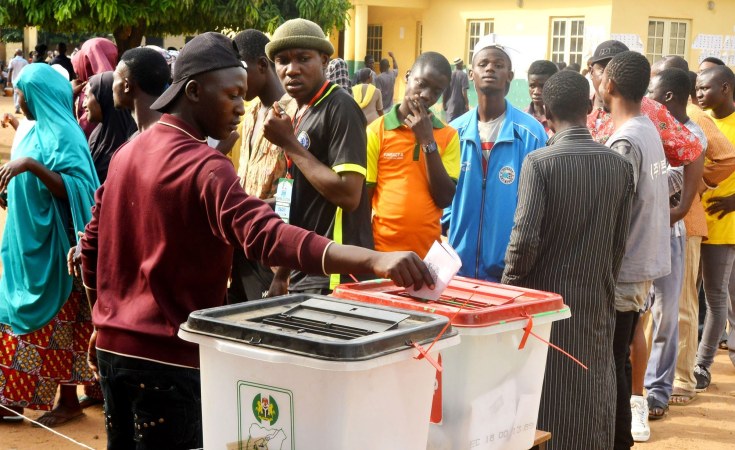 "The leading parties were at fault in not reining in acts of violence and intimidation by supporters, and in abusing incumbency at federal and state levels," the observers said in the report released on Saturday.

The "leading parties" in the elections were the ruling All Progressives Congress (APC) and the opposition Peoples Democratic Party (PDP).

The APC presidential candidate, Muhammadu Buhari, won the election with the PDP's Atiku Abubakar coming second. Mr Abubakar and the PDP are challenging the results of the presidential election.

Some 150 people were killed in election-related violence in different parts of the country, the EU report stated.

"The elections became increasingly marred by violence and intimidation. This harmed the integrity of the electoral process and may deter future participation.

"Around 150 people died in election-related violence during the campaign period and over the election days. INEC reported attacks on its offices, and also fatalities, abductions and sexual assault against its officials."

Only a few of the perpetrators of the violence were arrested by security agencies who seemed overwhelmed.

In Rivers State, the casualty included soldiers who engaged in shootouts with armed political thugs.

Journalists were also victims of the violence, the EU report stated.

"Journalists were subject to harassment, and scrutiny of the electoral process was at times compromised with some independent observers obstructed in their work, including by security agencies," the report stated.

Three PREMIUM TIMES journalists, Hassan Adebayo, Ebuka Onyeji, and Kunle Sani were among those who suffered some form of harassment and intimidation in the course of monitoring the elections.

Kunle Sanni was abducted by political thugs for taking pictures during the governorship election in Plateau State. He was later released after he was forced to delete the pictures.

Hassan Adebayo, during the governorship supplementary election, was harassed by police officers in Magajin Garri Ward, Sokoto North Local Government Area when he was trying to access one of the polling units.

Ebuka Onyeji was harassed and his gadgets temporarily seized by thugs in Imo State while covering the elections there.