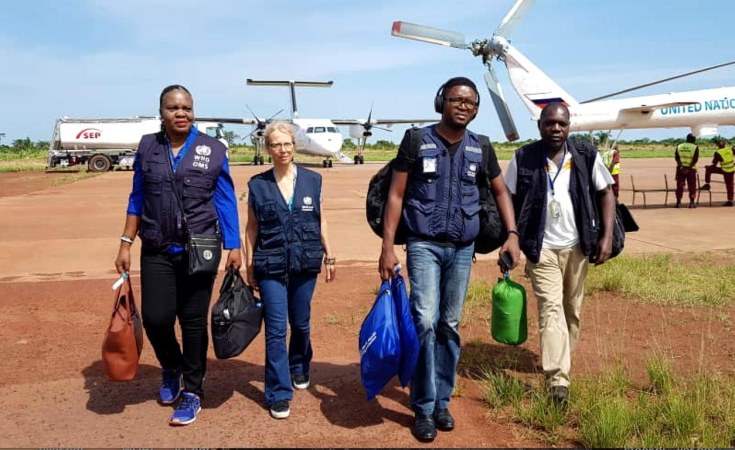 Kinshasa — AS there appears to be no end in sight to Ebola, whose death toll has surpassed 1 400 from over 2 000 cases and has spread beyond the Democratic Republic of Congo (DRC) into Uganda, the international community has been urged to step up its fight against the killer virus.

Experts nonetheless doubt the solution to the scourge is the international community. The solution lies within the DRC itself.

"The international community on its own is not going to be able to solve this," said Interchurch Medical Assistance (IMA) World Health's Dr William Clemmer.

"The most effective way to correct misinformation, engender trust and effectively contain this outbreak is to involve and engage the community (locals)," he added.

Clemmer has worked in the DRC for more than two decades. IMA World Health, a global faith-based nonprofit that helps developing communities overcome their public health challenges, has been in the country since 1995.

That year, 254 people died in the then-Zaire from an outbreak of Ebola in the southwestern city of Kikwit.

The current outbreak in the provinces of Ituri North and Kivu has claimed way more than that toll and is the second worst in history, yet with a death rate higher than the worst eruption that killed over 11 000 people in West Africa between 2013 and 2016.

The spread of the current outbreak in DRC, to Uganda in the east, has prompted calls for the international community to assist.

"Such interventions have been effective strategies in addressing past outbreaks," Bear said.

Bear believes even the support of the international community may not be enough, unless it is accompanied by intensive efforts to engage local communities and train local health workers.

Clemmer concurred, saying the mistrust and fear gripping communities after years of civil war and the prevalence of misinformation were undermining the fight against Ebola.

There have been attacks on health centres and personnel during the current outbreak from August last year. Armed groups have been the culprits but some civilians have been involved in the violence.

"This is the third Ebola outbreak that I've been involved in while serving in the (DR) Congo. But this one has been the most challenging by far," Clemmer lamented.

Save the Children urged the international community to act after a five-year-old boy and his grandmother (50) died in Uganda since the declaration of the first case on Tuesday.

Over 350 children have been killed in DRC.

"The international community must step up support and do all it can to stop the disease in its tracks in the DRC, and to prevent it from spreading any further in Uganda," said Ian Vale, regional director for

Save the Children in East and Southern Africa.

The World Health Organization (WHO) this week decided not to declare the outbreak in DRC and Uganda a public health emergency of international concern.

Previous Story
WHO Under Pressure Over Ebola Response
Next Story
Why It's Hard to Stop Ebola Spreading - Between People, Across Borders

WHO Under Pressure Over Ebola Response

Why It's Hard to Stop Ebola Spreading - Between People, Across Borders

Ebola Now Under Control - Uganda Health Ministry
Tagged:
Copyright © 2019 CAJ News Agency. All rights reserved. Distributed by AllAfrica Global Media (allAfrica.com). To contact the copyright holder directly for corrections — or for permission to republish or make other authorized use of this material, click here.