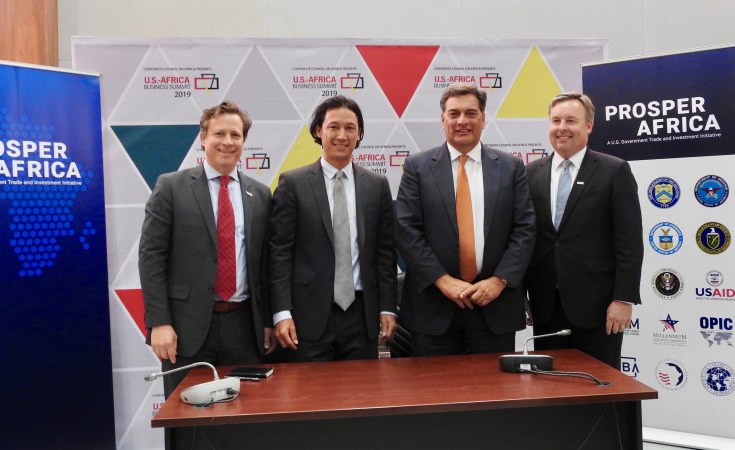 Maputo — This week, at the biennial U.S.-Africa Business Summit organized by the Corporate Council on Africa in Maputo, a number of African Heads of State as well as other senior government leaders rubbed shoulders with an impressive line-up of Trump administration officials.

They came to Mozambique to talk about a new way of doing business, using a 'whole-of-government approach'. The aim is to facilitate entry of many more American investors to Africa and provide the support (financial and otherwise) that the private sector needs to launch new business ventures and engage in new projects.

This stimulus for American engagement and American investment will create new jobs in the United States and in Africa, the officials say.

The fact that all people deserve access to low cost, sustainable, reliable electricity is the inspiration for two U.S. companies joining forces to deliver affordable electricity directly to consumers in Africa in areas where there is no electricity grid.

Our company, Symbion Power - based in New York - along with Natel Energy of San Francisco, have created a new energy utility platform called MyHydro. This mini-hydro system will deliver affordable power to villages and towns on a round-the-clock basis by converting water-flow into electrical energy.

MyHydro will be implemented on a large scale all over Sub-Saharan Africa. Innovative, new fish-friendly turbines will deliver American technology and American quality to rural areas where people have only ever dreamed of having an electrical connection.  Many new jobs will be created in San Francisco and New York, and economic growth will be unlocked in hundreds of small African communities as MyHydro units are installed.

When affordable electricity arrives in an African village the impact is immediate. Not only can children abandon kerosene lamps and use electric light to do their homework by, but commerce opportunities multiply.

Over the past four decades of electrifying villages in Africa, I have witnessed people racing to acquire machines for maize milling, engineering workshops being established, small refrigerated storage firms and processing plants opened for a variety of agricultural products.

The advent of power is truly transformational, and the demand grows exponentially.

We selected hydropower technology because the 'fuel' is free. It can be utilized all year in African rivers that have a perennial water flow. The new turbines are modular and require only minor civil and building works, therefore keeping costs to an absolute minimum.

Implementation will incorporate payment using mobile money where it's available, as well as micro-financing to help customers buy modern-day appliances and, in certain cases, the addition of water supply from the turbine location to the village.

MyHydro aims to install 150 Natel mini-hydro power plants and mini-grid systems in Africa before 2025. This will provide electricity to at least 1.5 million people. The first installation will be undertaken in Rwanda in late 2019 and early2020.

Prosper Africa has the potential to be good for America and good for Africa. Many more investments will likely follow as investors learn about the products and services that the U.S. government will bring to bear.  It is often said that President Trump has very little interest in Africa, but in Maputo this week it looked like massive engagement by his administration and a demonstrable show of support to Africa.

In the past year, both the First Lady Melania Trump, and the first daughter, Ivanka Trump, visits to Africa were widely seen as big successes. Their presence created enormous excitement. Other cabinet members have traveled to Africa, and the President surely will be welcomed on the continent once Prosper Africa has started to make its mark.

Paul Hinks,chief executive officer of Symbion Power, is a former chairman of the Corporate Council on Africa and current chairman of Invest Africa US