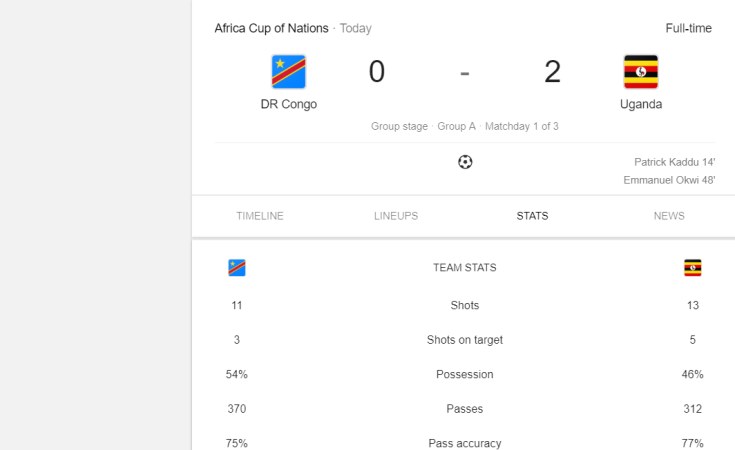 Supplied
Statistics for the Afcon 2019 match between Uganda and DR Congo.
The Nation (Nairobi)
By Andrew Mwanguhya

Uganda Cranes kick-started their 2019 Africa Cup of Nations campaign with a stunning 2-0 win over Democratic Republic of Congo is a thrilling Group A match at the Cairo International Stadium on Saturday.

The victory, courtesy of Patrick Kaddu and Emmanuel Okwi's headed efforts, took Uganda top of Group A with three points, with hosts Egypt, who edged Zimbabwe 1-0 a day earlier, second on goal difference.

Kaddu's glancing header off a Faruku Miya corner on 15 minutes was the first scored by Uganda in their opening match in 41 years.

Only that then, the goal came late as Uganda lost 3-1 to Congo Brazzaville.

This is also Uganda's first three points at the finals since a 2-1 semi-final win over Nigeria en route to the 1978 Afcon final.

Making his competitive debut for the Cranes, winger Abdu Lumala beat his man on the right with the Sweden-based player's cross headed out for a corner.

Miya delivered the resultant dead-ball and like he did against Cape Verde to confirm Uganda's qualification to these finals with a game to spare, Kaddu stayed up longest to head in past goalkeeper Ley Matampi.

Kaddu raced to Miya and they did their little dance as coach Sebastien Desabre punched away at and in the air. The goal generated enough noise it didn't matter it was nearly an empty stadium.

The Cranes could have gone two and three nil up but Kaddu thereafter failed to connect home two successive headers.

Congo's best chance yet came on the stroke of half time when Cedric Bakambu controlled in the area before turning and curling but skipper Denis Onyango tipped it away.

DRC were supposed to respond after half time.

Instead it's the Cranes who extended their lead, Okwi was fouled and Miya's yet another dead-ball was brushed in by the Simba striker for 2-0 moments into the second period.

Croatia-based forward, Miya - who top scored for Uganda in the qualifiers with three goals - could have added his name on the scoresheet but his free-kick was tipped over by Matampi.

In the middle, Mike Azira provided the calm, coordinating well with a relaxed Khalid Aucho and releasing forwards.

Bevis Mugabi and Godfrey Walusimbi were hardly hurried at full back, while Hassan Wasswa did the basics right, with Murushid Juuko recovering well from an earlier booking.

Okwi was as dangerous, his turns and twists troubling the Congolese, while Miya's man-of-the-match performance cannot be over-emphasised.

Egypt and Zimbabwe will have been watching and retaking notes, because from this Cranes display, you had to pay attention.

Uganda are next in action on Wednesday against Zimbabwe, with a draw all but confirming Cranes progression to the last 16.

Bafana Bafana Go Down to Elephants at Afcon 2019
Tagged:
Copyright © 2019 The Nation. All rights reserved. Distributed by AllAfrica Global Media (allAfrica.com). To contact the copyright holder directly for corrections — or for permission to republish or make other authorized use of this material, click here.