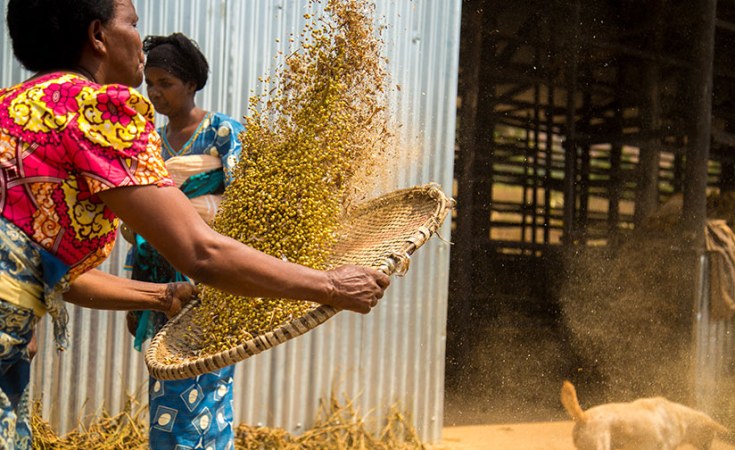 She couldn't easily figure out the reason why drones had been deployed in their farmland.

"Honestly, I lost sleep after watching a drone flying over our fields, it was really worrying given that we had never heard nor seen any drone in this area," she recalled.

This was towards the end of last year, when Charis Unmanned Aerial Solutions, a company that was started by young Rwandan nationals, was demonstrating the potential of drones in driving agriculture output.

The exercise took place in Gataraga Sector in Musanze District, Northern Province in the presence of central government officials and local leaders.

Mukayuhi--a smallholder farmer who hails from Gataraga--would later learn, through the drone findings, that he had been using poor farming practices.

She is one of the 28 model farmers who were selected for piloting the project, whose initial results have shown success.

"Together with my colleagues we have been interpreted the drone findings through photo displays that described the status of our plantations in red, yellow and blue colours,"

She particularly learnt that she had been applying a wrong mix of fertilisers, which gave her inconsistent yields.

"I have been advised to also use fertilisers while removing unwanted grasses so as to multiply the produce," she says.

In addition to providing useful information, drones will be used in spraying gardens with pesticides among other activities.

Speaking on Friday during the launch of a research project on the viability of unmanned aerial system services in wheat and potato farming for smallholder framers, Mukayuhi and other farmers testified that thanks to drones' help they expect more produce in this planting season.

"We anticipate higher yields. When this technology was introduced, were given access to information that we never used to have and introduced to new ways of farming," said Uzziel Mbanzabugabo, a potato grower.

The 'Inspire 2' drone, designed for data collection and 'DJA AGRAS MS1', and another drone designed for spraying liquid pesticide, fertilisers and herbicides were exhibited to farmers and officials in Musanze District as the main tools that will be used in implementing the project.

Mammy Ingabire Muziga, the Managing Director of Charis Unmanned Aerial Solutions, said they aim to contribute toward the development of agriculture by helping farmers make informed decisions during the entire farming process.

"One of the things is that the Government is going to benefit a lot because with the use of drones we are able to provide a lot of important information required by both farmers and authorities," she said.

She added; "We are looking to creating profiles of farmers so that we can tell accurately the kind of intervention needed, the type of fertilisers and seeds required; all that information will help our leaders and farmers to make good decisions."

Ingabire stated that they also seek to help Rwanda to achieve the Sustainable Development Goals (SDGs) by boosting the welfare of smallholder farmers and increasing the participation of the youth in the agriculture sector.

Jean Claude Musabyimana, the Permanent Secretary at the Ministry of Agriculture and Animal Resource said, that that the use of drones in the agriculture sector responds to the fourth Agriculture Transformation Strategy (PST4), which seeks to digitalise the sector among other commitments.

"Drones are one of the key strategies to sustain our agriculture growth and profitability,"

Musabyimana called upon farmers to embrace the land use consolidation system if they are to all benefit from use of drone technology.

"As you can see these drones can't easily reach everyone's plot of land. So, land use consolidation is the way to go," he told Musanze farmers.

The district currently produces an average of 30 tonnes of potatoes per hectares, which is below its potential of 40 tonnes per hectares, according to official estimates. The initiative is expected to improve the district's wheat output per hectare above the current seven tonnes.

In the future, such drone services are expected to be rolled out across the country and will cater for more crops.

CHARIS Unmanned Aerial Solutions was launched in 2014 and has so far provided a range of drone services, worth $20 million in many domains such as agriculture, construction, mining, film industry and tourism.

The company operates in Rwanda, Ivory Coast and several other African countries.