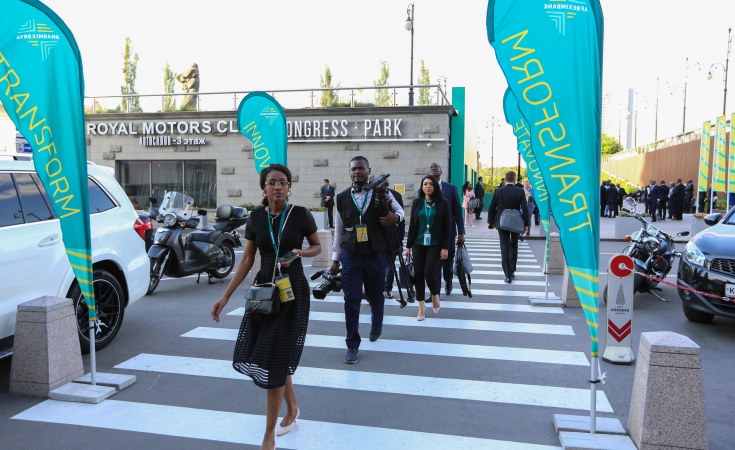 RosCongress
African journalists walk to their next interview at the Afreximbank meetings in Moscow.
African Export-Import Bank (Cairo)
press release

The Afreximbank Annual Meetings 2019 and the associated Russia–Africa Economic Conference have come to a close.

The events ran from 18 to 22 June in Moscow and became an important international discussion platform in the lead up to the Russia–Africa Summit and Economic Forum (23–24 October, Sochi). The events were organized by the Roscongress Foundation, African Export-Import Bank (Afreximbank), and the Russian Export Center.

Prime Minister of the Russian Federation Dmitry Medvedev spoke at the Opening Ceremony of the 26th Annual General Meeting of Shareholders of Afreximbank. He noted that Russian and African relations have a solid historical foundation, which they can use to their advantage as they move forward and find solutions to today's challenges. “Another objective reason for our rapprochement is the similar tasks facing our economies. Russia and all African countries have tremendous natural resources. According to some estimates, they account for 50 percent of the planet’s resource potential. We must use these resources effectively and simultaneously expand cooperation in this and other fields,” added the Prime Minister. Dmitry Medvedev met with President and Chairman of the Board of Directors of the African Export-Import Bank Benedict Okey Oramah on the side-lines of the Afreximbank Annual Meetings.

The business programme events were attended by representatives of executive government bodies. On the Russian side, they included Russian Foreign Minister Sergey Lavrov and Minister of Industry and Trade of the Russian Federation Denis Manturov. African representatives included: Chief Minister of the Republic of Sierra Leone David Francis, Permanent Secretary of the Political and Economic Affairs Office of the Federal Republic of Nigeria Gabriel Tanimu Aduda, and Minister of Trade and Industry of the Republic of Rwanda Soraya Hakuziyaremye. The panel sessions featured the participation of the heads of high-profile international and foreign organizations: Executive Secretary of the United Nations Economic Commission for Africa (UNECA) Vera Songwe, African Union Commissioner for Trade and Industry Albert M. Muchanga, Member of the Board and Minister in Charge of Trade at the Eurasian Economic Commission Veronika Nikishina, Chief Executive Officer of the International Islamic trade Finance Corporation (ITFC) Hani Salem Sonbol, Deputy Governor of the Central Bank of Egypt Gamal Mohamed Abdel-Aziz Negm, and African Union Commissioner for Infrastructure and Energy Amani Abou-Zeid.
A total of over 20 business events were held as part of the Afreximbank Annual Meetings and the Russia–Africa Economic Conference. Participants discussed the building of partnerships between African SMEs in the Russian market, trade between emerging markets and Africa's integration into the global economy, the financing of trade under difficult global financial conditions, digital solutions and cybersecurity for state and municipal operations, food security, healthcare, and education. Stressing the importance of the further development of multilateral cooperation, Advisor to the President of the Russian Federation, Executive Secretary of the Organizing Committee for the Russia–Africa Summit in the Russian Federation in 2019 and other Russia–Africa events Anton Kobyakov said, “Under current conditions, multilateral cooperation with rapidly growing African economies is of primary importance in Russia–Africa relations.

At the fore is demand for scientific and technological progress, comprehensive integration, and application of Russian innovative developments in sectors of the African economy such as agriculture, green energy, healthcare, and municipal management. Proof thereof is the heightened interest of experts, businessmen, and heads of African government agencies, who have come to Moscow for the Afreximbank Annual Meetings.”

During his speech, Chief Executive Officer of the Russian Export Center Andrey Slepnev expressed his confidence that Russia has met all of the conditions to strengthen its position in the region through investment in existing and developing economic chains, which would allow the country to secure a longer-term presence in Africa. “We have every reason to talk about the sustainable growth of Russian exports to Africa. Since 2015, we've seen a 23% annual increase in exports on average. Africa currently has enormous potential as a sales market.

Today's economic modernization is paving the way for serious infrastructure changes, which means that the need for high quality, competitive products is growing. Consequently, African countries are our strategic trade partners. Our research has shown, that Russian products in a number of industries are fairly competitive in Africa. It's vital that Russian businesses have the necessary skills to successfully enter this fast-growing market, and the REC is creating all of the conditions to make that possible,” said Slepnev.

In addition to a packed business programme, the organizers of the Afreximbank Annual Meetings and the Russia–Africa Economic Conference arranged a rich tour and cultural programme for guests and delegates.

The Roscongress Foundation is a socially oriented non-financial development institution and a major organizer of international conventions, exhibitions, and public events.
The Roscongress Foundation was founded in 2007 with the aim of facilitating the development of Russia’s economic potential, promoting its national interests, and strengthening the country’s image. One of the roles of the Foundation is to comprehensively evaluate, analyse, and cover issues on the Russian and global economic agendas. It also offers administrative services, provides promotional support for business projects and attracting investment, and helps foster social entrepreneurship and charitable initiatives.

The Foundation’s events draw more than 80,000 participants each year from 203 countries, with more than 10,000 media representatives working on-site at Roscongress’ various venues.

The Foundation benefits from analytical and professional expertise provided by 2,500 people working in Russia and abroad. In addition, it works in close cooperation with economic partners from 93 countries worldwide.

How to Limit the Continent's Exposure to Volatile Global Markets

Free Trade Agreement Sets Stage for United African Market
Tagged:
Copyright © 2019 African Export-Import Bank. All rights reserved. Distributed by AllAfrica Global Media (allAfrica.com). To contact the copyright holder directly for corrections — or for permission to republish or make other authorized use of this material, click here.