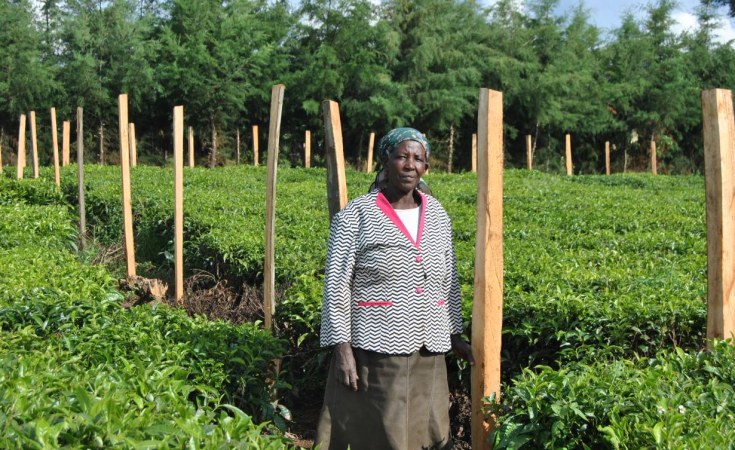 Kapcheboi, Kenya — Some see the ruling as a positive step toward equal access to land but others fear it undermines the traditional laws that have guided generations

A few months ago, the idea of coming home with a hoe in one hand and a sack of freshly harvested potatoes in the other was only a dream for Rachel Korir.

When her father died in 2012, his land in the village of Kapcheboi, in western Kenya, automatically went to his two sons, in line with the customary law of the Kipsigis tribe to which the family belongs.

Because Korir, now 70, and her five sisters were all married, tribal rules dictated that they were not entitled to any of their father's land.

"Even when I tried to work for (my brothers) plucking tea on the farm for money, they refused to offer me the job and gave it to other people from the village," said the mother of seven, sitting on a bench outside her small hut.

But in April, after a legal battle that lasted almost 20 years, Korir and her sisters got the title deeds to five acres (two hectares) of land each, in a case that land rights groups are calling a landmark victory for the women of Kenya's indigenous tribes.

"This is a welcome ruling that allows not only women but married women for that matter to inherit their father's land," said Pauline Vata, executive director at Hakijamii, a Nairobi-based advocacy group fighting for social and economic justice.

Land ownership in Kenya is usually vested in fathers who customarily pass it on to their sons, making it hard for women to secure rights except through their husbands. Women and their children are often evicted if the husband dies or they divorce.

Women in the East African nation were allocated less than 2% of about 10 million hectares of land that was registered between 2013 and 2017, according to research by the Kenya Land Alliance, an advocacy network.

However, the country's constitution states that all women have equal rights to own property, regardless of whether they are married or not, Vata noted.

"The case affirms what our laws have been saying all along," she said.

Korir said ever since she and her sisters won the case, many women have come to her for advice on their own struggles to get a share of their families' land.

But the ruling has divided tribes in parts of Kenya's Rift Valley, with some people seeing it as a positive step toward equal access to land and others fearing it undermines the traditional laws that have guided generations.

Korir said her fight for a share of the family land started in 1999.

After separating from her husband, she moved back into her parents' home. Her brothers had come of age and married by then, so their father had already given them their share of his 42-acre farm, in line with Kipsigis tradition.

With no source of income, Korir asked her brothers to give her one acre of the farm so she could grow crops to sell and pay for her children's school fees.

But they refused, she said.

Instead, they tried to evict her from the house, and several of their fights ended with them calling the police on her. She was arrested and jailed four times.

"My father bailed me out, promising to give me a portion of the land," she said. "But he never did."

Korir eventually filed a court case against her brothers for her share of the family's land, convincing her sisters to join her in the lawsuit.

When her father died in 2012, a friend advised her to seek help from the Kenyan Federation of Women Lawyers (FIDA) advocacy group to speed up her case against her brothers.

According to the customs of the Kipsigis, an unmarried woman can inherit land, but it must be less than her brothers.

If a woman is married, it is assumed she has access to land through her husband, so she has no right to her father's land, explained Vata, the social justice advocate.

A father can leave land to his married daughter in his will, she said, but to do so is considered such a taboo that few men dare.

In 2014, a High Court judge ruled in favour of the six sisters. According to land rights experts, this was the first time married Kipsigi women had been given the legal right to an equal share of their father's land.

After years of delays as the brothers filed a series of appeals, all of them denied, the sisters were officially given their land in April.

The judge's "milestone decision" to challenge customary law and uphold the equal right to property that Kenya's constitution gives all citizens has set a precedent that "should be protected at all costs," said Janet Anyango, legal counsel at FIDA.

Some fear the ruling undermines their traditional laws and customs, however.

"Our culture and identity as the Kipsigis is at stake when such a ruling is made, oblivious of our customary law," argued Bishop Paul Leleito, chairman of the Myoot Kipsigis Council of Elders.

Leleito said the council is calling on the government to amend the constitution's protections against gender discrimination, noting that the constitution also guarantees the protection of culture as "the foundation of the nation".

The law on equal access to land and property "should be removed and (it should) be said that we respect the customs of the different tribes in the country as long as they are not harmful but peaceful," he said.

Supporters of the sisters point out that the constitution also voids any law, "including customary law", that does not follow the law of the state.

At Kapcheboi village, elder Stephen Mitei applauded the ruling, saying that Korir and her sisters should never have had to go to court in the first place.

"Parents should be able to assist their daughters wherever possible and have them live lives as comfortable as their sons," Mitei said.

Anyango at FIDA agreed, saying the legal win gives hope that one day no woman will feel forced to go to the courts to get the land that is rightfully hers.

"May we remember the words of (singer-songwriter) Leonard Cohen," Anyango said.

"'There is a crack in everything. That's how the light gets in.'"