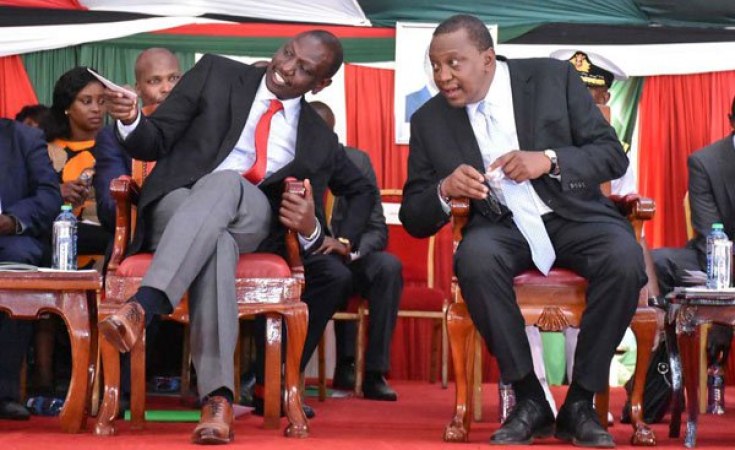 Nairobi — The discord within the ruling Jubilee Party continues to escalate by the day as Western Kenya and a section of MPs from Central loyal to Deputy President William Ruto joined the fray for the ouster of the party's Secretary General Raphael Tuju.

This comes as another faction of the amorphous Tanga Tanga faction met on Tuesday for the better part of the day to strategize the removal of Tuju, who has been accused of sabotaging Ruto's 2022 chances of succeeding President Uhuru Kenyatta who is serving his second and final term.

Capital FM News understands, the meeting which mainly comprised Rift Valley leaders, was so heated that members expressed their displeasure towards the conduct of Tuju, who was recently caught up in a leaked audio conversation that was widely shared on social media plotting the removal of DP Ruto from the party.

And to add on this, the Deputy President has accused half of President Kenyatta's Cabinet of holding secret meetings to plan his assassination, in what has shocked the nation, coming from the country's second most powerful leader.

In his accusations, Ruto claims some Cabinet Secretaries and Principal Secretaries from Central Kenya are so worried of his chances of taking the country's leadership to an extent of planning his elimination.

But CSs Peter Munya, Sicily Kariuki and Joe Mucheru who turned were summoned by police to record statements over the claims, dismissed them as hot-air, and instead accused the DP of making what Munya described as 'reckless allegations out to malign their names."

DCI Boss George Kinoti has authorized an investigation that can only take shape once the DP files a formal complaint.

Ruto is yet to record a statement, with officials in his office saying he can only do so with Kinoti himself.

In the audio linked to Tuju, a voice believed to be his is heard having a conversation with Limuru MP George Nyanja discussing a plot to push for the removal of Ruto from the party.

Belgut MP Nelson Koech, who has fashioned himself as the leader of the anti Tuju movement disclosed to Capital FM News that Tuesday's meeting was indeed a ratification of the discontent held by a majority of the members who want Tuju out.

It was during the informal meeting otherwise known as a 'Kamukunji' that brought together close to 5 lawmakers that the members in attendance also voiced their resolve to suspend their Sh10, 000 monthly contribution, insisting that they no longer felt part of the party.

Koech was categorical that the issues raised were so critical that the next cause of action was to notify the party's National Executive Council (NEC) about the views of the disgruntled members.

"Members contribute money and many believe that the monies are not put into proper use," he said.

Kimilili MP Didmus Barasa who was privy to the details of meeting but did not attend, told Capital FM News that Tuju had "become irrelevant to the party and that his exist was imminent."

"Tuju's time to leave the party has come and that is inevitable. Close to 110 members in the party want him out," he said.

Barasa, who has been a strong defender of DP Ruto's countrywide tours, which his (Ruto) critics have equated to be early campaigns for 2022, maintained that members will only resume remitting their monthly contributions only and when Tuju exits the stage.

"We are aware that Tuju has political ambitions and he wants to become the next Governor of Siaya, he should stop blackmailing DP Ruto and go," he said.

In a past interview with Capital FM News, Tuju, however dismissed the reports that he is eyeing the Siaya Gubernatorial seat.

Kandara MP Alice Wahome supported the plan to remove Tuju from the party noting that it was in the first place unconstitutional for him to serve as both the party's Secretary General and as a Cabinet Secretary without portfolio.

"We need him out," she protested.

KIharu MP Ndindi Nyoro, who also has been a strong proponent of radical changes within the Jubilee Party appeared non-committal on the subject despite his public outbursts to have Tuju removed.